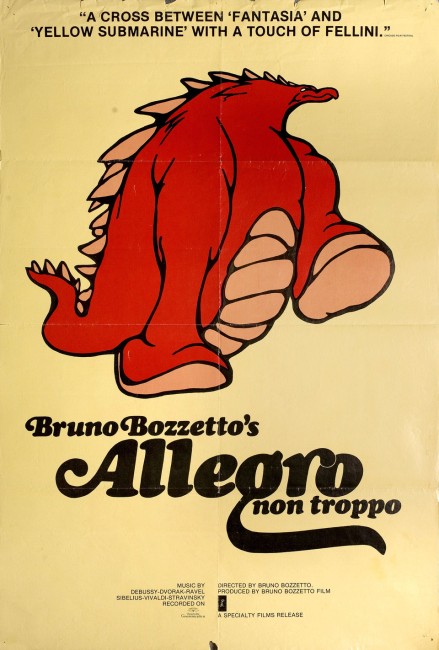 A theatre manager brings together an orchestra of old women and a pompous conductor, along with a cartoonist who draws a series of animations to accompany each musical number. Prelude to the Afternoon of a Fawn:- An aging satyr tries to make himself look younger so that he might pursue a beautiful nymph. Slavic Dance No 7:- A man constructs a hut and then a building but is imitated by other people and soon surrounded by skyscrapers. Bolero:- The contents of a bottle of Coke dropped by a spaceship evolve into life then vertebrate animals and eventually humanity. Sad Waltz:- A melancholy cat wanders through an abandoned house remembering the family that used to live there. Concerto in C Minor:- An industrious bee attempts to sit down to a feast of pollen but her dinner is constantly being interrupted by an amorous human couple. Fire Bird:- Two creatures are created out of clay. A snake tries to tempt them but is constantly thwarted in its efforts.

Maurizio Nichetti is an Italian fusion of Woody Allen and Mel Brooks. On screen, Nichetti deliberately affects the bumbling nebbish persona that Allen perfected, while his films are like more sophisticated versions of the parodies of various film genres that Brooks aims to make but without Brooks’s consistently lowbrow humour. Nichetti’s Ratataplan (1979) was a parody of Georges Melies; The Icicle Thief (1989) conducted a sophisticated spoof of the Italian Neo-Realist classic The Bicycle Thief (1949) by way of Allen’s The Purple Rose of Cairo (1985); and Volere Volare (1991) was Nichetti’s take on Who Framed Roger Rabbit? (1988).

Allegro Non Troppo is both a celebration of Fantasia‘s artistry and a witty lampoon of it. Like Fantasia, it sets animation to various excerpts of classical music. The sequences are slightly uneven but mostly extremely good. The segment set to Dvorak’s Slavic Dance is a slight one-note joke – about a man who builds a hut and is imitated in everything he does by other people – it is only a four-panel strip cartoon stretched out to a film segment several minutes long.

The segment set to Vivaldi’s Concerto in C Minor with a poor bee primly trying to arrange her picnic basket and knife and fork only to be constantly interrupted by cavorting lovers is charming. The Sad Waltz segment with the cat wandering through its former owner’s house is indeed sad, albeit brief. The Stravinsky Fire Bird episode is an overt parody of the Night on Bald Mountain segment in Fantasia, which Bozzetto and Nichetti proceed to turn upside down, having the diabolic snake give up in frustration and eat the apple, whereupon it has its mind blown by a dizzying rush of modern information overload.

The finest sequence is the Bolero sequence. It has a charmingly ironic opening, which satirises both Erich Von Daniken’s Chariots of the Gods nonsense and 2001: A Space Odyssey (1968). The march of evolution is supremely well tied to the piece of music at hand and the segment works well, even with its surprisingly dark undertone.

Allegro Non Troppo is also a far more adult film than Fantasia. Some of the segments are sexually overt and Bruno Bozzetto has a much darker sense of humour. The end of the film is like a series of Warner Brothers cartoons directed by someone with a sick sense of humour – an athlete is sliced apart by the ribbon at the finishing line; a cat flees a mouse only to be crushed by a giant trap; God puts his fingers in his ears so as not to have to listen to an opera singer; a princess tears a courting prince to pieces.

The live-action sequences rely on a Three Stooges slapstick freneticism, although have some inspired moments – like the man inside an animated cel that sneaks out to steal the conductor’s lunch and is inadvertently set on fire; or the way the silent movie piano score suddenly starts to waver as Nichetti tries to stand up to the overbearing conductor.