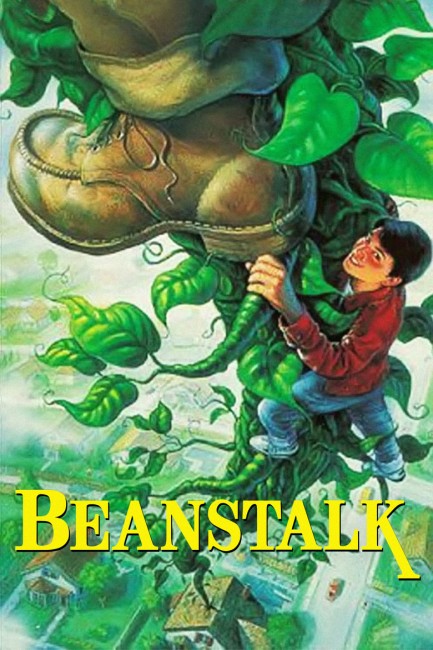 Kate Winston, a zoologist who specialises in discovering the basis of myths, digs up several giant bean pods. These accidentally fall into the hands of young Jack Taylor. He plants the beans in the backyard whereupon they sprout a giant-size beanstalk. Pursued up the beanstalk by a school bully, Jack enters the clouds where a race of giants lives.

Albert and Charles Band had a good deal of success in the 1980s and 90s with Empire Productions and then Full Moon Productions, producing a series of low-budget genre films producing the Trancers, Puppetmaster and Ghoulies films, among others. Amid this they created the Moonbeam subsidiary video label, producing a series of low-budget films for children. With the sole exception of the delightful Dragonworld (1994) and the quite surreal Magic in the Mirror (1996), almost all of these have been pitiful.

This, a modernising of the fairytale Jack and the Beanstalk, is one of the better – and even then it only rises to a level of bare mediocrity. It is helped immeasurably by not having to depend on Mark Rappaport’s abysmal puppet effects to carry the fantasy, unlike most Moonbeam films, most notably Prehysteria! (1993) and sequels.

The film’s major plus is a sense of humour, which comes near to redeeming the film. The young hero manages to get the bully pinned down and threatens to spit on him in a parody of Clint Eastwood’s famous monologue in Dirty Harry (1971): “I know what you’re thinking – is he really going to spit on me? Or to tell the truth in all this excitement my mouth might have dried up …”

There are some amusing takes on contemporary culture from the point-of-view of the Giants – the Giant finding a newspaper headline: “Mets lose to Giants? Alriiiiiight.” Or upon seeing Mount Rushmore: “They’ve captured some of our people and turned them into stone!” And then there are the scenes with the giants debating whether Little People are real, which becomes an amusing parody of current obsession with paranormal phenomena – a photo of a plane is thought to be a UFO; a photo of an astronaut in a spacesuit is thought to be a mythical creature with one eye; and naturally the government is accused of covering the truth about Little People up.

In some poor makeup, Stuart Pankin badly overplays the part of the giant. Margot Kidder plays with some amusement on screen, giving the part of the loopey scientist far more than it deserves.