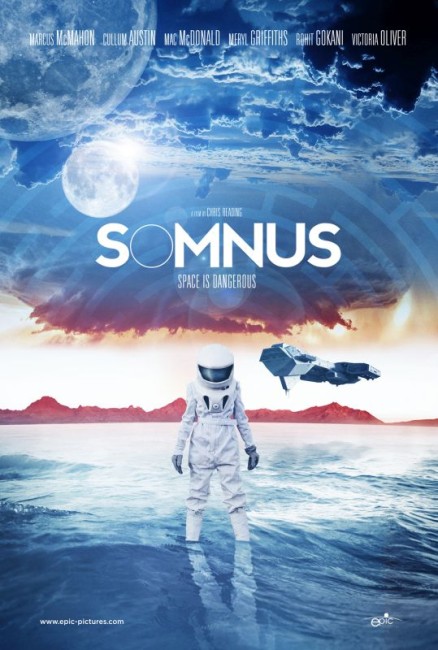 The three person crew aboard an ore carrier bound from Phobos to Earth puzzle over a series of malfunctions that are plaguing the mission, which may be being caused either by the shipboard computer MER-YL or one of the crew. The engineer Rupert goes to examine the computer core but is killed during one of these malfunctions. They are forced to detour to the nearby asteroid Somnus, which has been turned into a hollowed-out habitat, in order to affect repairs. Aboard Somnus, they find strange things happening, including one of the people living there who insists that aliens are intending to wipe out all life on Earth and that their ship plays a crucial part in the plan.

Somnus was a directorial debut for British director Chris Reading who had previously made a couple of short films and had some credits in the film music department.

I have always been a sucker for space movie – not so much Star Wars/Star Trek type ones but ones set in what you might call real space – the limits of the Solar System and/or deal with realistic attempts to venture across the High Frontier. Somnus – set on a spaceship journeying from Phobos to Earth and involving a detour to a hollowed-out asteroid – seems pleasingly set to hit all the right beats in this regard.

The first half of the film is set aboard a space mission and features a crew of working stiffs in space a la Alien (1979). The set-up reminds of something like 2001: A Space Odyssey (1968) or Dark Star (1974) – the crew having to deal with mysterious malfunctions, seemingly being caused by the shipboard A.I., which even manages to kill one of the crew as they try to investigate. On the other hand, these scenes also seem incredibly laidback and unfocused. It is hard to work out where the film seems to be going. A much better film would have built a 2001-like sense of paranoia or uncertainty as the crew delved into the mystery about whether the cause was the shipboard computer or one of the crew.

The second half involves a detour to the title asteroid, which has been hollowed out as a biosphere, even has its own garden. This is an idea that seems fascinating, although we see little of Somnus beyond its garden and an exterior of the ship docked. Once there it is hard to work out what is going on. There seems to be a lurking creature in the garden but nothing really happens regarding this. Elsewhere, captain Marcus McMahon meets a man (Mac MacDonald) who explains that they are part of a plan created by aliens who are intending to destroy everybody on Earth so that they can then return and repopulate anew. It would appear that this plan has been set in place for centuries and that the shipboard A.I. was also in on it.

At this point, one is going WTF.(Maybe the title gave a clue in that ‘somnus’ is the Latin word meaning ‘personification of sleep’). The script makes no real sense. Especially so in that the End of the World is casually talked but details left frustratingly vague. At the finale, Marcus McMahon returns to his ship and sets the self-destruct, apparently so as to screw-up the never-seen aliens plan and obliterate any hope of repopulating Earth. There is also a prologue set in England aboard a train in 1952, which has no relationship whatsoever to the rest of the film.