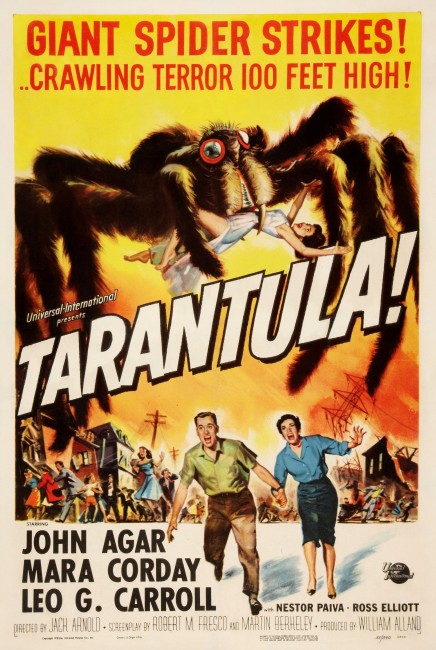 In the small Arizona town of Desert Rock, local GP Matthew Hastings puzzles over the death of scientist Eric Jacobs. Jacobs has an extreme case of acromegalia, a medical condition of uncontrolled bone growth, and Hastings wonders how such a case could have developed in a matter of days. Hastings meets Stephanie Clayton, the new research assistant of Jacobs’ employer Professor Gerald Deemer. Together they discover that Deemer is trying to create a formula that will grow animals to giant sizes as a means of solving food shortages. Deemer is then injected with the growth formula and Stephanie sees him starting to develop hideous acromegalia too. Meanwhile, a tarantula that has been injected with the formula escapes from the laboratory and starts growing to giant-size, killing cattle and then people.

Tarantula was one of the classic science-fiction films made during the 1950s by director Jack Arnold. Jack Arnold was the genre’s finest directorial voice during this period. He debuted with It Came from Outer Space (1953) and made other classics of the era such as The Creature from the Black Lagoon (1954), Revenge of the Creature (1955), The Incredible Shrinking Man (1957), and the lesser likes of Monster on the Campus (1958), The Space Children (1958) and The Mouse That Roared (1959), as well as came up with the story for The Monolith Monsters (1957).

Tarantula was undoubtedly inspired by the success of the giant atomic ant film Them! (1954), which came out eighteen months earlier. The one difference between Tarantula and Them! and almost any other 1950s giant monster movie is that Tarantula eschews atomic radiation as the catch-all explanation for what is going on. Instead, it falls back on the 1930s and 40s staple of the mad scientist.

In this respect, Tarantula straddles a line between two eras – it is a new breed of 1950s monster movie with enlarged creatures rampaging across the landscape and endangering society, while on another level it points the finger of blame at scientists traversing into areas of forbidden knowledge. Arnold based Tarantula on No Food for Thought, an episode he had directed some months earlier for the tv anthology series Science-Fiction Theater (1955-7).

As a monster movie of this era goes, Tarantula is reasonably good. The effects are decent and Jack Arnold directs with customary efficiency, although ultimately Tarantula is a film that lacks many of the more subtle, often poetic shadings and subtexts that Arnold’s other films had. One can say that it is an efficient monster movie but it never stands above the rest like other Arnold films do.

Almost all of Jack Arnold’s films resonate with the sense of man dwarfed in an environment that has become alien to him. Certainly, Arnold crafts a poetry out of the desert landscape, as he did in It Came from Outer Space. There is a sense of humanity alienated in the vastness of the landscape and geological time. “Serene, quiet, yet strangely evil as though it were hiding it’s secret from man,” John Agar notes at one point of the desert. Later he comments: “You can’t end guess the desert. Rocks that have stayed for a thousand years just move. There’s no figuring.”