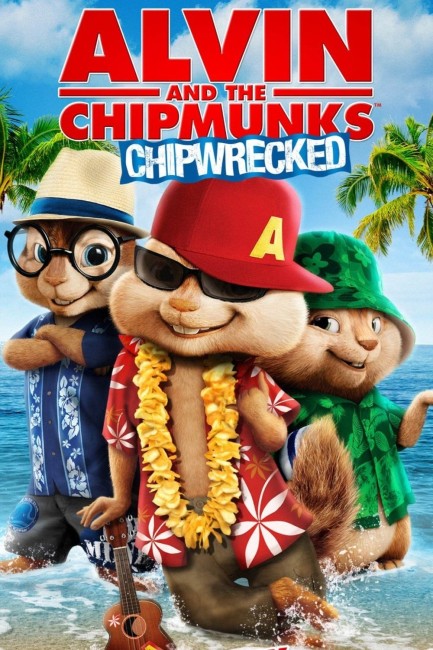 Dave takes the Chipmunks and the Chipettes with him on a holiday aboard a cruise liner. However, the chipmunks’ constant playfulness and fun-seeking causes chaos among the passengers and the captain threatens to put them off at the nearest port. The Chipmunks’ old nemesis Ian is also aboard working as the ship’s mascot and is determined to obtain revenge by coming down on them for the slightest infraction of shipboard rules. Alvin attempts to fly a kite but this goes wrong and he, the Chipmunks and Chipettes are swept away to sea. In trying to help, Dave gets tangled up in a parasail and is swept away too, along with Ian. They all end up adrift on a desert island. As Dave and Ian search for them, the Chipmunks build tree huts and are befriended by a strange castaway Zoe. They also locate a lost treasure but everything is threatened by the imminent eruption of the island’s volcano.

It may well say how doomed the Western world is as a culture that such an inane, empty-headed premise as watching a bunch of cutsie, smartass talking animals sing with squeaky high-pitched voices has managed to be extended to fill four films, all of which have been quite reasonable box-office successes. Alvin and the Chipmunks: Chipwrecked reigns in as mildly less excruciating and painful than the previous two films.

Under director Mike Mitchell, previously known for Deuce Bigelow, Male Giglolo (1999), Surviving Christmas (2004), Sky High (2005), Shrek Forever After (2010) and subsequently the live-action sequences in The Spongebob Movie: Out of Water (2015), Trolls (2016) and The Lego Movie 2 (2019), there is less of a focus on smartass one-liners. There is also less in the way of song numbers this time as the plot’s focus is far more on mimicking the desert island adventure story.

That said, there is still a great deal in the way of the Chipmunks (and Chipettes) being cutsie in sequences that are intended as little more than the equivalent of mud pie fights – the Chipmunks causing chaos after squirting suntan oil on the ship’s deck so they can go skating on it; the Chipettes in a disco dancefloor showdown of styles with a trio of bitchy girls that look like they have stepped out of Jersey Shore (2009-12); the Chipmunks amok in the ship’s casino; the Chipmunks Tarzan-swinging or travelling on zip lines through the jungle of the island and so on.

The minor spin that Alvin and the Chipmunks: Chipwrecked places on what has gone before in the other films is to throw the Chipmunks, Chipettes, Jason Lee’s Dave and, in a contrived addition, David Cross’s Ian onto a desert island. This seems solely for the purpose of offering a new venue for the usual malarkey. To this extent, the film appropriates the dramatic cliches of the desert island drama for its running time – a lost treasure; a volcano about to explode; fears of a monster lurking; a villain determined to get the treasure at all costs; a climactic scene taking place on a bridge over a ravine that is about to collapse. None of these are delivered in any interesting way – or even with dramatics that generate the remotest shred of tension.

The film’s wackiest addition is comedian Jenny Slate in a parody of Tom Hanks in Cast Away (2000) – imagine Hanks’s role having been recast as a combination of a ditzy airhead and an Indiana Jones gone wrong, with beach ball companions that have been given sinisterly twisted expressions on their drawn faces.