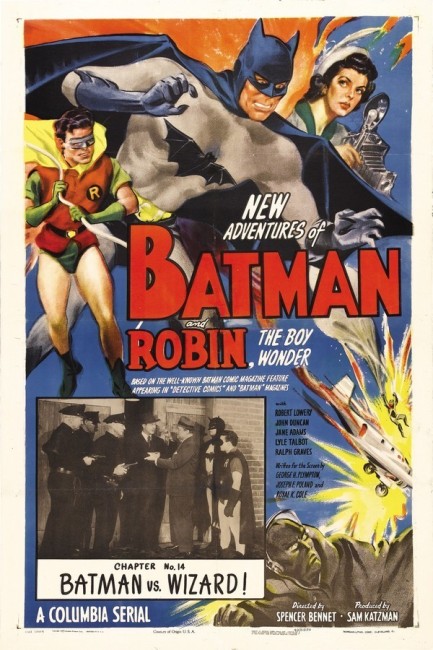 Batman and Robin tackle a new crime wave plaguing Gotham City. Behind this is the masked and hooded criminal mastermind known only as The Wizard. The Wizard’s henchmen steal a device invented by Professor Hammil that can take over and remotely control any vehicle. Knowing that The Wizard will use this to bring transport in Gotham City to a standstill, Batman and Robin fight to prevent The Wizard’s men from getting the pieces they need to power the device.

Batman and Robin – which should not be confused with the Joel Schumacher abortion Batman & Robin (1997) – was the second Batman film ever made. Batman had appeared only a decade early in Detective Comics #27 in 1939. During the 1940s, a number of comic-book and occasionally radio superheroes were adapted to the screen in serial form with the likes of Mandrake, The Magician (1939), The Green Hornet (1940), The Shadow (1940), Adventures of Captain Marvel (1941), The Phantom (1943), Captain America (1944) and Superman (1948). Serials were films that were released in 12-15 chapters of around twenty minutes, each of which would play at a matinee before the main feature and would end on a cliffhanger to entice the audience back the following week. (For a more detailed overview see Serials).

Amidst these there had been a Batman serial made by Columbia with Batman (1943). This suffered from impoverished production values and has interest today only in terms of seeing its weak attempts to approximate the comic-book in comparison to the modern versions. Batman and Robin was a second serial, produced with an entirely different cast and production crew. It is generally agreed by most serial fans that it is superior to the first film. Both serials were fifteen chapters long each.

It is rather laughable watching Batman and Robin‘s attempt to approximate the comic-book, especially when one has been jaded by the modern big-budget superhero films. (It is worth noting that the primitive production values in the two serials are what directly led to the campy spoof of the Batman (1966-8) tv series). The stylised atmosphere of the comic-book tends to get killed off when one sees the Batmobile as an ordinary saloon car, or Batman and Robin getting their costumes out of an office cabinet drawer. Batman’s costume looks rather laughable with its wrinkly tights and absurdly pointy ears. Rather than Wayne Mansion, Batman and Robin live in an ordinary suburban two-storey, which somehow has a Batcave beneath it. (Oddly, Bruce gets an everyday house, while the professor gets a full mansion and grounds – it is hard to see why it could not have worked the other way around).

There are times the superheroics show through with a routinely prosaic dullness – there is the absolute lameness of the sequence where the Batmobile breaks down and Batman is forced to stand in the middle of the road and wave his cape to get a motorist to stop and loan his car in order to continue the chase, while in another scene he has to get a ride with the police.

Serials were notable at failing to ever approximate the superheroics of their comic-book counterparts, even when superheroes like Captain Marvel and Superman could fly. There was a distinct lack of super-villains with most of the threats that superheroes faced being no more than petty criminals and gangsters, although criminal masterminds did (as here) sometimes hide their identity behind masks and hoods. The serial does surpass itself in the scenes when we see his henchmen entering a cave and going down through a trapdoor into the conning tower of a submarine, which submerges by remote control and heads to The Wizard’s hideout. This too is a cave where The Wizard, dressed in black and a hooded mask while surrounded by a bank of electronics, has a device that offers an x-ray picture of the cave door to see who is standing there. The wheelchair-ridden professor has a nifty scene (repeated several times throughout) where he climbs into an electrified chair that causes him to be able to stand upright and walk again. There are other great scenes like where The Wizard has an abducted scientist taken to a mountain cabin and he appears out of the shadows as a figure in a hood with an eerie light glowing from the eyeholes of his mask that then starts blinking and places the scientist into a hypnotic trance.

The cliffhangers tend to the routine – there are several of these that involve vehicles going over cliffs. Many of these are lame or cheats – Batman is trapped on top of a train heading towards an obviously back-projected tunnel but is simply able to duck when it comes to the next chapter; he is seemingly blown up inside a shack but is then revealed to have discovered a cellar before the bomb went off; Batman and Robin are locked in a vault and it blown up but in the next episode it is revealed that they just happened to discover the doorway to another entire room inside the vault and slipped in. The most improbable of these is where we see Batman fall out of a multi-storey building and the next chapter reveals the absurd scheme whereby Vicki Vale’s brother Jimmy unmasked Batman while he was unconscious and then for some reason decided to put the Bat costume on himself.

Some of the cliffhangers are okay – Batman being thrown against a live electrical circuit board, The Wizard remotely electrifying a bar Batman is holding to levitate it over the edge of a cliff and then drop it. There is quite an effective cliffhanger with Batman and Vicki pushed off a pier by the crooks and then oil set alight in the water around them with a thrown lamp, but this is let down by the next chapter that simply allows them to swim free. One of the more amusing cliffhangers is when Batman is trapped inside a locked room filled with carbon dioxide and handily gets free in the next episode by producing an oxy-acetylene torch that he has somehow has hidden inside his utility belt. Surprisingly, one of the best moments of suspense in the film is not a cliffhanger at all – one where Bruce, posing as a member of the gang, is required to prove his loyalty by shooting a captured Robin – who survives when the bullet hits his belt buckle.

Batman and Robin is routine at best – and this is probably being generous. It lacks anything in the way of plot – just a sequential narrative of endlessly strung-out and contrived suspense sequences, not to mention lots of running around between locations. There are the usual contrived plot devices to keep stringing action out that you get in serials – the need for The Wizard to obtain diamonds, a formula, explosives, Vicki’s negative, synthetic diamonds, a neutraliser to the remote control device, the Super Jet Plane and so on.

The villain’s grand world domination is merely that of perfecting a device that allows him to remotely control vehicles, which is rather banal as world domination schemes go. In order to advance the plot, the story frequently and improbably requires Commissioner Gordon to regard layabout playboy Bruce Wayne as a confidante about police matters rather than the mayor or any of his officers. Essentially, the comic-book has been reduced to little more than an extruded B crime drama that takes place with the heroes in funny costumes.

The biggest disappointment about Batman and Robin is the revelation of The Wizard’s identity. [PLOT SPOILERS]. Throughout we have been led to believe that Professor Hammil was The Wizard – there are repeated scenes of the professor using the device to cure his injury and get up out of his wheelchair and then vanish into a hidden door behind his fireplace, after which we usually see scenes of The Wizard in his cave or minions heading down to the submarine. However, the last chapter reveals that Hammil was not The Wizard after all – rather it was his manservant Carter who improbably also has a twin brother. There is an absurd revelation about one of the twins being set up as The Wizard and trailed and shot and it revealed that the professor was forced to make a confession about being The Wizard.