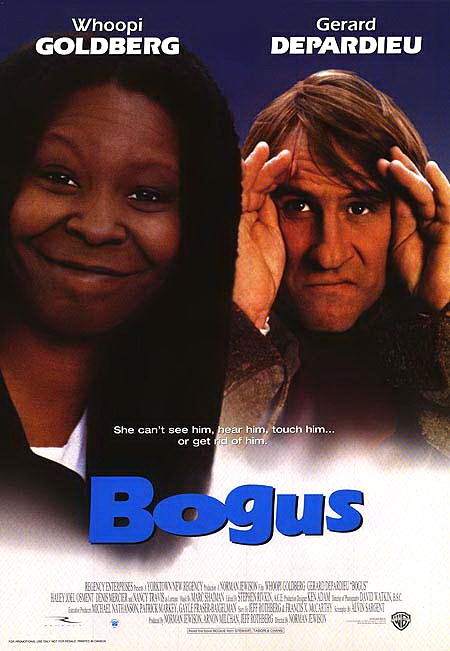 Las Vegas showgirl Lorraine Franklin is killed in a car crash. In her will, she has appointed her foster sister Harriet who lives in Baltimore as guardian of her young son Albert. Harriet reluctantly accepts responsibility for Albert but has no time to be bothered with him. Albert is then befriended by Bogus, a large, friendly Frenchman who appears out of a colouring-in book and can only be seen by him.

This venture into the subgenre of children’s film dealing with invisible companions is a rather likeable effort from Norman Jewison. Jewison is a celebrated director who is usually known for more studied adult dramas such as In the Heat of the Night (1967), Rollerball (1975) and The Hurricane (1999), having accrued three Academy Award nominations as Best Director.

With Bogus, Jewison crafts a quiet and rather sweet film about a kid with an invisible companion. If Bogus is to be faulted, it is perhaps that Jewison’s approach is on the restrained and mannered side. Nevertheless, when one compares Bogus to its nearest model, Drop Dead Fred (1991), the difference is appreciable. Where Drop Dead Fred‘s approach was more akin to an all-out mud pie and food fight combined, Bogus takes the time to engender often tender emotions.

All in the piece play well. Gerard Depardieu is surprisingly well cast and likeable as the gentle giant and plays with an empathic warmth that quietly endears. Whoopi Goldberg gives a convincingly sour and negative performance and when her inevitable transformation and redemption comes, it is touchingly conducted.

Of course, the role of Albert, the kid with the invisible companion at the centre of the story, was played by Haley Joel Osment, a few years before Osment made a phenomenal breakout performance in The Sixth Sense (1999).