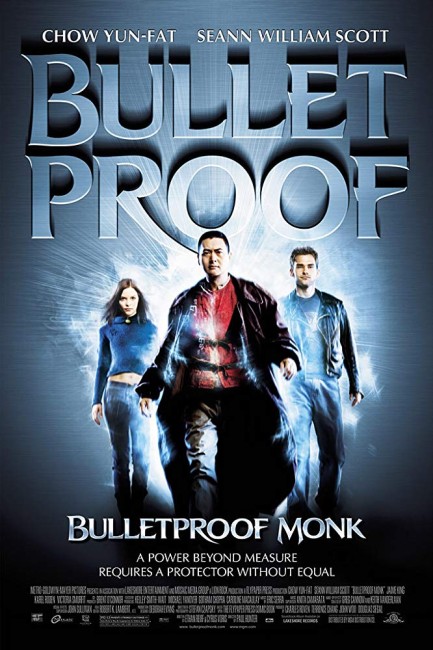 In Tibet in 1943, a monk graduates as his master’s top pupil. As reward, he is shown the secrets of the Scroll of the Ultimate, which is capable either of great good or of casting the world into evil, and of making the bearer immortal. Immediately after, Nazis under Commander Strucker burst into the monastery in search of the scroll and kill the master. The monk makes an escape. In the present day, Kar, a petty pickpocket, steals the scroll from the unaged monk. The monk follows Kar and is impressed by his martial arts abilities, something that Kar has learned working as a projectionist in a martial arts revival theatre. The monk believes that Kar might have potential as his successor and begins training him. Meanwhile, the aging Strucker comes after the monk, determined to obtain the scroll’s secrets.

Bulletproof Monk has clearly been assembled to capitalise on the success of the flying, wall-climbing martial arts moves that became the in-thing after the hit success of The Matrix (1999) and in particular, this film’s greatest debt of inspiration, Crouching Tiger, Hidden Dragon (2000). Bulletproof Monk is at heart a copy of a Hong Kong film – indeed, this type of fantastical martial arts fantasy is so prevalent in Hong Kong that it has become a genre unto itself – the Wu Xia film.

The producers certainly conduct some smart moves by employing no less than director John Woo in the producer’s chair and lead actor Chow Yun Fat. Both John Woo and Chow Yun Fat are legends in Hong Kong cinema and have been able to successfully cross over into careers in the West. The film also employs two other Hong Kong veterans Wei Tung, sometimes a director and a veteran stunt/martial arts choreographer on films such as John Woo’s A Better Tomorrow (1986) and Jackie Chan’s Twin Dragons (1992), and the legendary Cory Yuen, who has choreographed martial arts for films like Zu: Warriors from the Magic Mountain (1983), the progenitor of the Wu Xia cycle, Romeo Must Die (2000), X-Men (2000), The One (2001), as well as directed an equal number of martial arts films, including The Transporter (2002) and DOA: Dead or Alive (2006).

Despite this impressive talent arrayed on its behalf, Bulletproof Monk emerges as no more than a shallow attempt to exploit the momentary fad for wire fu. It flopped in a big way, not just critically, but with the essential audiences that it was pitching itself to – the martial arts and action crowd. Maybe the crucial mistake was employing a director whose only previous track record had been directing music videos for Mariah Carey, Jennifer Lopez and various rappers and a script from the duo of Ethan Reiff and Cyrus Voris who had previously turned out the not terribly inspiring likes of Tales from the Crypt Presents Demon Knight (1995), various of Full Moon’s Josh Kirby … Time Warrior! series of juveniles and created the Brimstone (1998) tv series and subsequenty the story for Ridley Scott’s Robin Hood (2010). [Reiff and Voris later returned to tongue-in-cheek martial arts with the script for Kung Fu Panda (2008)].

Whatever the case of colossal miscalculation involved, Bulletproof Monk sinks like a lead balloon. Director Paul Hunter appropriates all the mid-air twirling, acrobatic loops and graceful gravity-defying dances common to Wu Xia cinema. But there is not a single move in Bulletproof Monk that lights the screen up with the wow and dazzle of even lesser Wu Xia films, not a single move that does not seem a cliché. What Bulletproof Monk badly feels like is a construction-line film slung together by people seeking only to exploit another hit and without any understanding of what made the originals work in the first place.

The sad truth is that there are people involved in Bulletproof Monk who know better. John Woo is the godfather of Hong Kong cinema and pioneered a certain of type of extraordinarily balletic, slow-motion violence in his various gangster films. It is a shame that he could not have had a word of inspiration in Paul Hunter’s ear. Indeed, with so many talented people from the Hong Kong martial arts cinema – John Woo, Wei Tung and Cory Yuen, all of whom have had substantial careers either choreographing martial arts films and/or directing them – it is amazing to see how an unproven director has been able to drag the contributions of all down to dross. You can guarantee that if any of them had been allowed the director’s chair we might have ended up with a far more enervated film that the one on display.

Indeed, there is one point where Paul Hunter seems to be tipping his debt of ingratitude to John Woo – a shot circling Chow Yun Fat in slow-motion while he stands atop a car roof shooting with guns in both hands. But the shot has a pitiful derivativeness that makes it only seem a cliché move, and where any dazzle it might have held is killed off by the next utterly laughable moment where Paul Hunter has Chow Yun Fat knocking out two oncomers with his ejected ammo clips.

It is equally a shame that executive producer Gotham Chopra could not have gone to his more famous father, New Age author and guru Deepak Chopra, for advice on injecting more substance into the film’s musings on enlightenment. The film’s moves there are utterly derivative. It appropriates the standard novice and Eastern teacher relationship in entirely cliché ways. (Although, while Chow Yun Fat gives a performance where he seems bored, Seann William Scott brings the same cocky, lop-sided smirk that served him through roles in films like American Pie (1999) and sequels and Road Trip (2000), and is reasonably well cast).

There seems no more appropriate a line in the film than when Seann William Scott tells Chow Yun Fat: “This is America, we don’t have enlightenment here – we have McDonald’s, strip clubs, shopping malls and HBO.” It unwittingly taps into the callousness at the heart of the film – while the screenwriters regard the line as a cockily irreverent culture-clash joke, in truth it perfectly pinpoints the contrast between mass culture and mass-market movie product vulgarity that Bulletproof Monk embodies over the genteel harmony and grace of the Eastern philosophy that underlies the infinitely superior Hong Kongese originals. The clash between Eastern and Western cultures is not necessarily that bad an idea – the late, great tv series Kung Fu (1972-5) obtained wonderful mileage out of this, and other films such as The Last Dragon (1985) and Big Trouble in Little China (1986) played it for a good deal of enjoyable humour. Unfortunately, where Bulletproof Monk ends up is somewhere down in the company of The Golden Child (1986).

Even more than that, Bulletproof Monk is a film with a severe cultural identity crisis – the hero learns his moves not from any Eastern master or school but by working as a projectionist at a kung fu revival theatre and imitating the on-screen moves; the movie theatre is run by a Japanese man pretending to be Chinese; there is a side-villain who rules the gangs and has a gangsta’s name but a British accent; and finally the heroine who is a Russian Mafia princess, lives in luxury, and like Jennifer Garner’s Elektra in Daredevil (2003), appears to have spent her entire life training in martial arts for no clear reason, and likes, with even less reason, to hang out with the street gangs. The script has Nazis invading Tibet – something that never happened historically. (One suspects that the film was too chicken to name the Chinese Communists who invaded Tibet in 1949 and instead raided the Raiders of the Lost Ark (1981) cookbook for cliché villains. Indeed, in the original Flypaper comic book, Kar was a Chinese kid come to the US to find a martial arts master to help save his parents from the Chinese Communists, but here in another case of Whitewashing has been cleaned up and recast with a Caucasian actor).

There is also a nasty scene where Jaime King confronts Victoria Smurfit, who runs an international war crimes centre, and asks her why she has to concentrate on the negative instead of emphasising the positive. In that Victoria Smurfit is shortly thereafter revealed to be a Nazi villainness, the scene leaves a nasty implication in one’s mouth – that people attempting to bring attention to torture and war atrocities in the world are by connotation sinister, and that one should instead concentrate on the positive instead ie. a naively, head-in-the-sand optimism and a view of the world where such unpleasant things never assail one’s horizon.