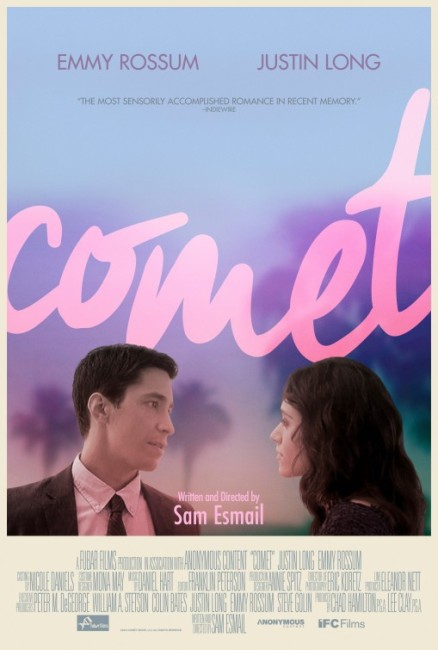 In a parallel universe, Dell meets Kimberly in a line-up outside a Hollywood cemetery where she is on a date with a guy whose pretensions he ridicules. They connect up and later get together. Over the course of several years, their relationship fades and wavers through breakup and reconnection.

I sat down to watch Comet intending to review it because it claims to be set in a parallel universe. The film’s premise of a relationship strung out between multiple different selves intrigued me. Soon into the film, we end up seeing different versions of Justin Long and Emmy Rossum interacting with one another in differing stages of relationships – getting together, breaking up, wanting to get back together. One expected that what would follow would be something akin to a variant on films like Sliding Doors (1998) or The Butterfly Effect (2004) and perhaps even more so the Brazilian Possible Lives (2001) where we see the same characters in very different lives.

All of this is a complete lie. Comet is not set in a parallel universe; it is set in the same one we live in where people visit actual locations and make references to existing pop culture. Take away all but the last shot (more on that in a minute) and Comet would be nothing more than a standard indie relationship drama. It is not even a variant on Sliding Doors or Possible Lives – all of the characters are the same ones and we are just seeing them at different points along a single timeline. This is a film that regards ‘parallel universe’ as nothing more than a phrase it can appropriate to mean whatever it wants – certainly, Sam Esmail has no interest in using the term in the sense that anybody writing or reading science-fiction would. To that extent, Comet feels like a cheat.

What we in fact have is a relationship film that is trying to be wry, ironic and cute (and failing at all of these). I have to admit that Comet initially hooked me with its opening scene. There is a great piece where Justin Long is standing in a line at a Hollywood cemetery and demolishes Emmy Rossum’s date (Eric Winter) for his pretentions. Here the dialogue is a joyous dance and each wry zinger that Long delivers is music to the ears.

Only it soon becomes apparent that this kind of wry ironic dialogue is the only thing that Comet has going for it. Indeed, for all the Justin Long character’s slamming of Eric Winter for his pretensions and affectations of depth, it is something that you could just as equally accuse Sam Esmail of doing as a writer. Sample pieces of dialogue: “You hate Pixar movies and still have an AOL account. I don’t want to be with a person like that.” This is a film that self-consciously namedrops Richard Dawkins and The Selfish Gene (1976) to establish its intellectual credibility or where a debate about splitting up has Emmy Rossum telling Justin Long: “This is no time for one of your meta-arguments.” If this is an example of the cinema that the hipster generation has in store for us, then I am begging please someone just shoot me now.

In reality, Comet seems so engaged in its meta-arguments that it disappears into a puff of its own self-admiring cleverness. Justin Long and Emmy Rossum seem to spend more time delivering wryly self-aware lines analysing what it means to be in or out of a relationship than they ever do actually being together. Almost anything that resembles scenes of them together as a couple occur outside of the film’s frame. There are the initial flirtatious scenes walking around the cemetery but these are upstaged by silly pieces like the visit to Edward Murrow’s grave or Justin Long monologuing about randomly approaching people and yelling “give me the money”. Both Justin Long and Emmy Rossum are actors at the peak of their game and give good performances through the course of the story (which essentially consist of a series of Before Sunrise (1995)-type monologues between the two of them) but Sam Esmail’s love of the cuteness of his own material kills the film dead in the water.

The only real reason for Comet‘s inclusion here is the stated opening card that tells it is set ‘several parallel universes over’ and the final shot of the sunrise where [PLOT SPOILERS] we see that this Earth has two suns. Although this does push Comet conclusively into genre territory, it is a nonsensical notion. It is like other arthouse films of recent such as Another Earth (2011), Melancholia (2011) or Upside Down (2012) that appropriate science-fictional ideas without any interest in what they mean or the science behind them. Esmail makes the ridiculous assumption that a world with two suns would end up identical to Earth in every single way right down to the replication of modern culture, places and films. In reality, a planet orbiting two suns would have a longer day/night ratio and very different climate – to say that human culture would have occurred in identical ways, not to mention human life even having evolved in tandem, seems an absurdly improbable notion.

Sam Esmail subsequently went on to conceive the story for the horror film Mockingbird (2014) and create the hit hacker tv series Mr Robot (2015-9).