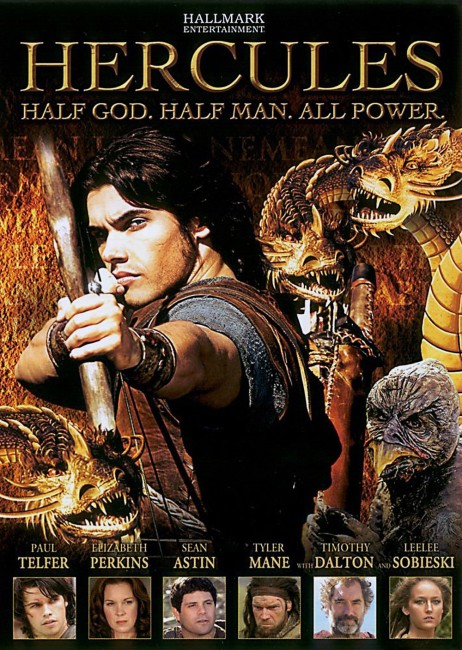 During the Harvest Festival celebrations by the all-female worshippers of Hera, the high priestess Alcmene is forcibly taken by a man. When she learns that her husband Amphitryon was at sea that night, Alcmene believes that her rapist was Zeus, who is at war with Hera. Alcmene subsequently becomes pregnant with two children. She then learns that one of the children, Hercules, was fathered by Zeus, and the other, Eurystheus, by Amphitryon. Because he is the spawn of Zeus, Alcmene regards Hercules as an abomination. However, Amphitryon, a follower of Zeus, refuses to allow her to kill Hercules. Hercules grows to manhood, but proves to be weak and bumbling as a warrior. During one Harvest Festival, Hercules spies on the rites of the Hera worshippers. In the midst of this, an excited Megara, the daughter of King Creon of Thebes, throws herself at him. Afterwards, Megara is horrified at what happened. Hercules is shamed and forced to go into exile. There he determines to learn how to fight and become strong. He is granted permission to return to Thebes after saving King Creon’s life. There he finds that Megara has birthed three children but has poisoned them against him under Alcmene’s tutelage. Megara has also married Eurystheus. She then drugs Hercules and sends the children to him. Hallucinating, he thinks the children are demons and slaughters them. Horrified at what he has done, Hercules flees and tries to kill himself but is prevented from doing so. The Oracle of Delphi tells him that the only way he can gain redemption for his crimes is by returning to Eurystheus, who has become king, and performing five Labors under his command. However, Eurysthius and Megara set increasingly more impossible Labors for Hercules to complete, hoping that these will kill him.

Before one sits down to watch this tv mini-series version of Hercules, one scratches their head wondering what approach it could take that the massive body of cinematic Hercules films have not exhausted between them by now. The most well known of these was probably the Italian Hercules (1958) with Steve Reeves, which cast Hercules as a brawny muscle-builder, and was a massive success that led to an entire industry of Italian musclemen films (peplum) throughout the 1960s. These films seemed to cover all possibilities of a heroic Hercules. In the 1990s, the likes of the Australian comedy Hercules Returns (1993), tv’s Hercules: The Legendary Journeys (1994-9) and Disney’s animated Hercules (1997) put Hercules through a good deal of self-parody, after which it seemed unlikely that anybody could conceive of a serious Hercules film again. That said, nine years later we saw a revival with two competing big-budget Hollywood Hercules films, Hercules (2014) and The Legend of Hercules (2014).

Nevertheless, a serious version of Hercules is what Hallmark Entertainment are attempting to do with this four-hour tv mini-series. Hallmark have produced a great many mini-series and adaptations of classic stories for television. (See below for Hallmark’s other genre productions). Notedly, they previously ventured into Greek myth with lavish mini-series versions of The Odyssey (1997) and Jason and the Argonauts (2000).

The answer about Hallmark’s approach proves a surprisingly obvious one – rather than a story about a brawny superhuman throwing people around or a self-parody, they simply tell the story of Hercules as it is written in the Greek myths. The script for Hercules comes from Charles Edward Pogue who also wrote genre items such as The Hound of the Baskervilles (1983), David Cronenberg’s The Fly (1986), Psycho III (1986), DragonHeart (1996) and Kull the Conqueror (1997). Pogue’s script is the most faithful to the original Greek myths of any screen version of the Hercules story to date – perhaps of all other Hercules screen adaptations put together. All the aspects are there from the war between Zeus and Hera; Zeus’s impregnating Alcmene; her dual pregnancy with Hercules and Eurystheus; Hercules’s involvement with Megara (although here it is merely a one-night stand rather than him marrying her) and the murder of their children; his requirement to undergo the Labors to expiate for his crimes; and his marriage to Deinara.

Certainly, Charles Edward Pogue has truncated many incidents or merged two characters into one in a number of places. The most noticeable change is that Hercules only undergoes five instead of twelve Labors (although a couple of other Labors take place elsewhere in the story). Some character connections are made for the sake of plotting convenience – Megara marries Hercules’s half-brother Eurystheus, for instance; Deinara’s encounter with the centaur Nessus is changed into the Labor of the Ceryneian Hind; while Hercules’s father Amphytrion does not die in battle but during Hercules’s attempts to subdue the Hydra, which is no longer one of his Labors. In the original stories, Linus is meant to be Hercules’s music tutor, who is killed when Hercules hits him with a lyre, but here he survives and becomes Hercules’s sidekick.

Pogue also notedly eliminates appearances from any of the gods – though much of the mini-series concerns the war between Zeus and Hera, neither make any appearance, and it is quite possible to construe an agnostic take on the film where everything can be put down to the activities of mortals who merely believe in the gods. As Hercules announces at the end: “We are not gods, Antaeus. Merely men. Very strong men,” wherein Pogue neatly solves the eternal question of classics scholars as to whether Hercules is mortal or demi-god.

Rather than give us a Hercules as a brawny, musclebound hero, the mini-series gives us a Hercules who is primarily a believable character. Much of the first half shows him as bumbling, impatient and constantly failing, with it only being into the second half that we see him training to become a hero and bodybuilding while in exile as a sheepherder in the mountains. The result is decidedly different from anything that one expects of a Hercules film – where the emphasis of the story is on the in-politicking and bitchery among the various factions rather than a musclebound hero throwing people around as it is every other film version. The story that Charles Edward Pogue writes has a fascinatingly wound complexity to it. One of the dramatic highlights of the mini-series is where Hercules is drugged by Megara, kills the children thinking them demons, and then in shock realisation at what he has done runs through the forest, tearing down trees in his rampage and then lights himself atop a pyre and goes to stab himself through his heart, before he is hit by a lightning bolt (of presumably divine origin).

Pogue even goes so far as to show some of the ubiquitous Greek homosexuality of the time – with Megara frustrated in Eurystheus’s lack of interest in siring any children with her and a later scene where Hercules comes across him in bed with Iphicles. Contrast this to the public lynching that Oliver Stone received when he merely attempted to suggest that Alexander swung both ways in Alexander (2004). (Although, Charles Edward Pogue is not quite brave enough to go so far as showing Hercules with any of the numerous male lovers he is purported to have had according to the classical writers).

This is also very much a Hercules that has been construed in the aftermath of the success of Peter Jackson’s The Lord of the Rings trilogy. As seems to be rapidly becoming a cliche for post-LOTR fantasy, the filmmakers have trekked to New Zealand to shoot there as Jackson had (and before that Hercules: The Legendary Journeys). Director Roger Young borrows the cliche helicopter shots sweeping across the landscape that Jackson patented. If that were not enough, the mini-series also casts the annoyingly smug Sean Astin as what is in all-but-name another version of Samwise Gamgee.

Hercules has been produced with modestly lavish regard. There has been an effort, like Hallmark’s Jason and the Argonauts, to place the Greek myth into a real world setting. We see reconstructed Greek cities stretching around the landscape and centaurs and satyrs casually living alongside humans. The effects are decidedly variable however. The appearance of the harpies is suitably grotesque. On the other hand, scenes like Hercules lifting the centaur above his head or the encounter with the Nemean Lion only look like obvious digital effects, with the poorest effect being the appearance of the Ceryneian Hind. Much better is the fight scene with the Hydra – while the spotty digital effects show through, Roger Young stages the scene dramatically enough that the excitement of the encounter carries it.

Paul Telfer has clearly been chosen for his youthful handsome looks rather than his handsome brawn (although he does bulk up in the last half of the show) and proves an adequately brooding Hercules. Leelee Sobieski, made up with her skin an iridescent golden, has a captivatingly ethereal beauty throughout. (Although, she does get the silliest scene in the whole mini-series where Paul Telfer comes across her bathing naked and she is forced to flee the scene by clinging to the side of an elk – but due to network standards preventing showing any of her body, this bizarrely requires her to flee with her body hanging down one side of the elk turned away from the camera).