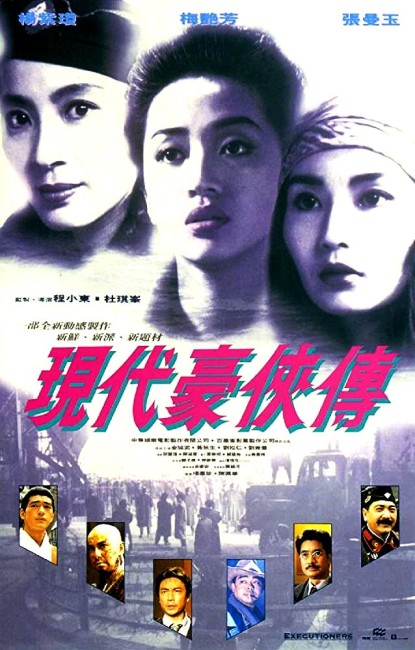 It is after the nuclear holocaust. Tung has married Lau who is now the police commissioner. He is trying to keep order in the cities where water is an irradiated scarcity and the authoritarian Clear Water Corporation maintains the only clean supplies. Thief Catcher Chat now acts as a bounty hunter and bandit robbing water shipments, while San drives an ambulance. The mysterious masked figure that pulls the strings behind the Clear Water Corporation gives orders that Chong Hon, the popular figure who leads crowds in protests about the water shortages, be assassinated. Lau is blamed and hunted for the murder and Tung arrested. Chat goes on a quest to find unpolluted water, while San guards a double for the President.

The Heroic Trio was a good deal of fun, but Executioners is a resounding flop that does none of the things that the original did well. One might be more forgiving if this was a quickie sequel that was dashed off for the sole reason of exploiting the original, but to the contrary, Executioners involves almost all of the principal creative talents from the original.

The majority of the martial arts sequences are unexcitingly directed and compare dismally to the outré sequences that Ching Siu-Tung crafted in the original. Indeed, for more than two-thirds of this film, there is nothing of the masked superheroines and fantastical martial arts sequences that there were in the first film. Finally, after 75 minutes of the 101-minute running time, the film does eventually explode into action.

After this point, there come some moderately imaginative sequences – one with Maggie Cheung beating a metal mask for herself while in a jail cell, triumphantly announcing her presence by holding it up to the light in silhouette and then kicking the door down and grabbing machine-guns to shoot a hole through the wall to escape just like a character from a Warner Brothers cartoon. There is also an imaginative fight between her and the Colonel dancing along the power lines above the street. The climactic scenes taking on Mr Kim are entertaining – with hopping martial arts, fun with explosive-tipped arrows and the various combatants pushing vehicles around with super-strength and swinging in by chandelier. However, it hardly recompenses for such a dull and disappointing build-up.

The subtitling is some of the worst one has ever seen from a Hong Kong production and frequently produces some howlers:– “When the time comes you’ll be retaliated,” “The colonel has ordered to perish you,” “The world is belonged to us soon,” “Does she worth your protection?”. In one hilarious moment a combatant complains “Why did you kill me?” following an attack. There are bizarre taunts like “You’re immutable” offered up. Frequently the subtitling is clouded out due to being placed up against overexposed light sources, which may well be fortuitous in the circumstances.