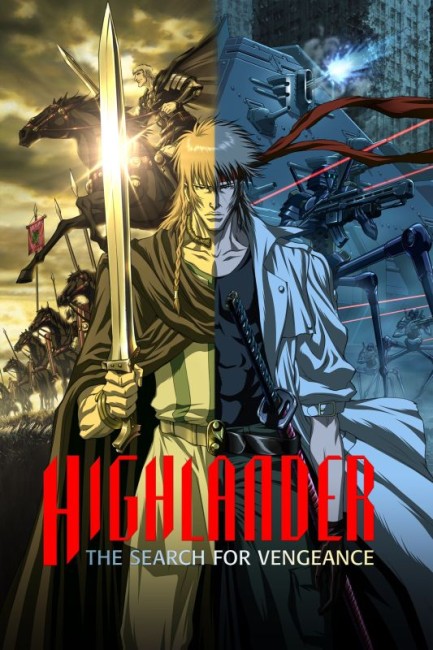 It is the year 2187. Colin McLeod is an Immortal who was adopted into the McLeod clan centuries ago. He wanders the devastated landscape of the future, hunting and killing other Immortals for the bounty. After his latest kill, Colin comes to New York to claim his bounty and is told that his paymaster wants to meet him. Once inside the city gates however, Colin escapes his escorts. Hunted, he is granted refuge by Dahlia who lives with others in the sewers. Dahlia reminds Colin of his love Moya back in England under the Roman occupation in 125 A.D. who was crucified by the cruel Marcus Octavius, along with all of Colin’s clan. In trying to kill Marcus, Colin discovered that both he and Marcus were Immortals. He has pursued Marcus across the ages in many different eras, seeking vengeance for the death of Moya. He now discovers that Marcus is the master of New York City and is planning to release a virus that will kill all mortals. It is the time for the final confrontation between Colin and Marcus.

Highlander: The Search for Vengeance is a variant that came out around the same time as the live-action Highlander: The Source. Here producers William Panzer and Peter Davis went to Japan and asked director Yoshiaki Kawajiri to craft an anime film based on the Highlander premise. Yoshiaki Kawajiri is classic anime director who has made the likes of Lensman (1984), Wicked City (1987), Demon City Shinjuku (1988), Ninja Scroll (1993), Vampire Hunter D: Bloodlust (2000) and episodes of anthologies like Neo-Tokyo (1987) and The Animatrix (2003). Co-director Horoshi Hamasaki is a newcomer who subsequently went onto direct Iron Man: Rise of Technovore (2013).

After noting that Highlander: The Search for Vengeance had a post-holocaust setting and was animated, one thought that it might be bravely attempting to spin a feature-length film out from the similarly set, universally hated Highlander: The Animated Series. This turns out to not be the case and The Search of Vengeance is a completely different work – although one at least supposes that the two futures presented in either The Search for Vengeance and The Animated Series are not mutually exclusive in terms of continuity.

The Search for Vengeance is a Highlander film that has been fed through the stylistic tropes of anime. Rather than resembling any of the previous stars of the series like Christopher Lambert, Adrian Paul (or even Elizabeth Gracen), Colin McLeod is a typical anime hero who seems to be in his teens with long elongated, androgynous features and face covered by artfully draped forelock. As with most Yoshiaki Kawajiri heroes, he is also a grimly internalised loner. There are the standard anime themes of love, sacrifice and reincarnation. Indeed, what we have no longer much resembles a Highlander film but a Highlander film that has been reworked as a samurai anime – there are a number of similarities to in particular Yoshiaki Kawajiri’s Ninja Scroll.

Yoshiaki Kawajiri directs some nice action scenes – like Colin and Marcus fighting out across his balcony and down the parapet; or the glorious image of the two of them fighting with swords on the wing of a burning plane during World War II. A good many of the action scenes also come in the traditional stylised Kawajiri way – battlefield scenes all shot in red, focused on stylised sword swathes and flashes of blood wiping the screen.

Yoshiaki Kawajiri is very much an old school anime director. He has not fully adapted to the modern era of CGI animation and at times Highlander: The Search for Vengeance seems awkwardly caught between traditional and modern anime. The action is far more dependent on traditional moves than modern CGI action and as a result somewhat the lesser. Certainly, computer animation allows the creation of some beautifully detailed backgrounds of the future cities and ruins.

The film does finally mount to some modestly impressively scaled mass destruction sequences. Here Kawajiri does the killer robot, Cyberpunk future thing (by which time The Search for Vengeance is surely far more science-fiction anime than it is ever an entry in the Highlander franchise). Alas, the benchmark for this genre has fairly much been set in recent years by Shinji Aramaki’s Appleseed (2004) and nothing in The Search for Vengeance holds a candle to that.