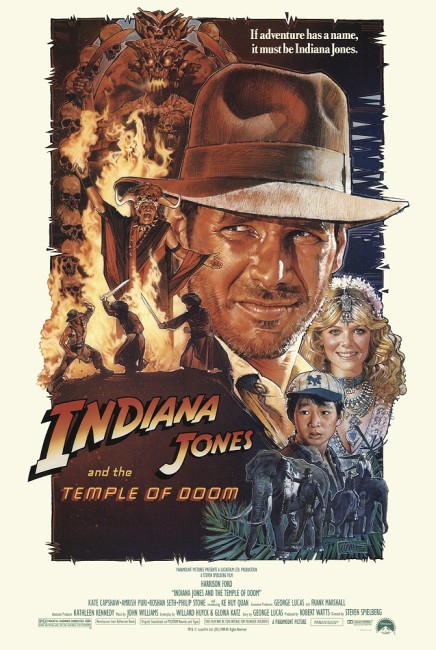 1935. After a deal to buy an artifact from local mobsters goes wrong, Indiana Jones flees from a Shanghai nightclub accompanied by singer Willy Scott and his young Chinese pickpocket sidekick Short Round. They escape aboard a plane but the pilots are in the pay of the mobsters and bail out of the plane, abandoning them in mid-air without parachutes. They manage to escape by jumping out in an inflatable life-raft and skiing down a mountainside. They sail into a village in India where the locals believe they have come in answer to the village’s prayers. The village’s sacred stones have been stolen and their children abducted as slaves by a Thuggee cult. Indiana undertakes to be their rescuer. To do so, he must venture into the midst of the cult’s human sacrifice rituals in the mine beneath a local maharajah’s palace.

Raiders of the Lost Ark (1981) had been a fruitful collaboration between Steven Spielberg and George Lucas, made out of either’s love of serial-type adventure films. It was a huge box-office success and ended up becoming the then fourth biggest grossing film of all time. Steven Spielberg, George Lucas and Harrison Ford reunited for three further Indiana Jones films, this and Indiana Jones and the Last Crusade (1989) and the long promised fourth film, which eventually emerged as Indiana Jones and the Kingdom of the Crystal Skull (2008). Although it should be noted that Indiana Jones and the Temple of Doom is actually a prequel, as opposed to a sequel, to Raiders of the Lost Ark, and sets itself one year earlier.

Lawrence Kasdan, who delivered the script for Raiders of the Lost Ark, had in the interim gone onto a highly successful directing career with the twin hits of Body Heat (1981) and The Big Chill (1983). The script for Indiana Jones and the Temple of Doom was turned over to husband and wife writing-sometimes directing team Willard Huyck and Gloria Katz. A decade earlier, Huyck and Katz had written George Lucas’s American Graffiti (1973) hit and a couple of years later would go onto direct and write Lucas’s most notorious flop Howard the Duck (1986). The script wound together many ideas for action sequences – both the nightclub opening and the sequence where Indiana bails out of a plane using an inflatable life-raft as a parachute – that were originally dreamed up by Spielberg and Lucas for Raiders of the Lost Ark but discarded from the final script.

Where Raiders of the Lost Ark was conceived along the lines of a serial, providing a series of action sequences at regular intervals, Indiana Jones and the Temple of Doom is almost a single action sequence – a veritable rollercoaster ride that begins from the first scene and rarely lets up for any breathing room in the next 118 minutes. Steven Spielberg creates some immensely exciting set-pieces – a sequence in a room of compacting walls filled with spiders, a breakneck race through the mine complex aboard a trolley cart, an exciting climax hanging from a rope bridge. The opening is an impressively large-scaled sequence set in a nightclub directed with a knockabout energy that suggests something of a Harold Lloyd screwball comedy taking place on the sets of an MGM musical.

However, as Steven Spielberg’s one other venture into comedy, the flop 1941 (1979) showed, screwball slapstick is not his forte at all. Raiders of the Lost Ark worked through a happy marriage of the sheer fun that all parties involved appeared to be having and the grizzled charm of its leading man. With Indiana Jones and the Temple of Doom that accord seems more like a happy coincidence – the attempt to up the kinesis overbalances the happy melange of elements, and Willard Huyck and Gloria Katz’s script seems to miss the natural humour that made Raiders work.

The story seems arbitrary to proceedings and only highlights in contrast how good Lawrence Kasdan’s script and characterisation for Raiders was. The mystic stones are of no importance to the story except as a pretext to get Indiana into the temple – the same could not be said of the Ark in Raiders, which exuded an eerie supernatural undertow throughout the film. The action whips along with a breakneck pace, which is enjoyable enough until it stops and one starts to think about that the silliness of set-ups – involving survival from a fall out of a plane by landing on the mountainside in a life raft, Indiana’s zombiefication, and the Thuggee rituals that somehow involve the removal of a person’s heart while they still remain alive. There is no deeper resonance to the story than the kinesis of adventure – the stones, the enslaved children do not mean anything here. There is nothing like the great scene of moral indecision in Raiders where Belloq taunts Indiana to destroy the Ark and he realises that he cannot. At the end of the film, there is no triumphant sense of a hard battle won – merely of a rollercoaster ride having reached its predetermined ending.

Furthermore, everything is pitched at the level of screaming caricature – the Sri Lankan travelogue scenery is only there as opportunity for slapstickery with the native fauna. There is also an obsession with the repulsiveness of native culinary practices – meals of eels, snakes and chilled monkey brains or crawling with insects – that verges on the culturally intolerant.

Worse is Kate Capshaw’s heroine. Part of what made Raiders of the Lost Ark sparkle was Karen Allen and a character that seems perfectly matched to the hero in terms of ability to wade into the action and a sparring relationship where one knew knew that the two wanted one another but would not admit it. There is no such sparkle between Indiana and Willy here. She resembles a bad characterisation of a dumb blonde, obsessing over broken nails in moments of danger, screaming at local customs or at being surprised by animals. In fact, Capshaw seems to spend more time screaming than she does delivering dialogue. While Raiders of the Lost Ark infused classic serial heroine roles with a welcome dose of the modern woman, it is as though Indiana Jones and the Temple of Doom takes feminism back thirty years. (It should also be noted that during the filming Steven Spielberg dumped then long-time girlfriend Amy Irving to take up with and later marry Capshaw).

The degree of soft violence in the film – notably scenes where the priest reaches a hand into a victim’s chest and pulls out their heart – led to complaints from parental groups and the establishment of the PG-13 rating certificate in the USA. Indiana Jones and the Temple of Doom inexplicably won that year’s Academy Award for Best Special Effects, despite often visible matte lines, while the infinitely superior effects in other films of that year such as Dune (1984) and 2010 (1984) were completely overlooked.