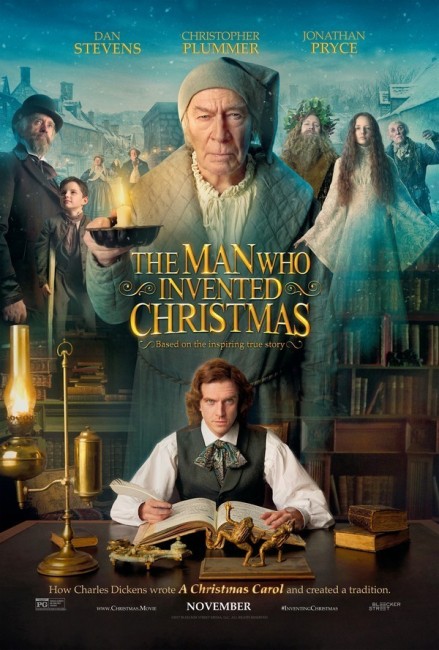 1843. Charles Dickens has enjoyed great success as a writer but following the flop of three novels in a row, he is facing financial hardship and mounting bills on all fronts. Under pressure to come up with another success, Dickens has the idea of writing a Christmas story. Though the idea is ridiculed by his publishers, he persists, coming up with the characters of the miser Scrooge, the spirits that visit him, Jacob Marley, Bob Cratchit and Tiny Tim, all based on the people around him. As Dickens comes under pressure from mounting debts, a financially irresponsible father who moves in, an impossibly close deadline to get the book in stores for Christmas, he is visited by Scrooge and the characters from his book. Others meanwhile argue that he should devise a more positive ending for the characters.

Of all the abovelisted author biopics, The Man Who Invented Christmas must count as the most outrightly lunatic (even aside from the blatant lie of the title). It has several things in common with the life of Charles Dickens – yes, he financed the publication of A Christmas Carol himself and on an impossibly tight schedule; yes, it was a hit after a string of flops; yes, he did have an impecunious father.

However, the film has rearranged these into an absurd fiction of its own. Every author biopic listed above has scenes where the author meets someone or sees something happen and a lighbulb goes off as we see them suddenly conceive the characters. This takes that into overdrive where almost the entire film consists of Dan Stevens encountering people and characters, even people uttering lines of dialogue direct from the book.

One of the main problems with the film is Dan Stevens. Stevens can be a fine actor and I have no real quibble with him. He doesn’t much look like the surviving photos of Dickens but gets the hairstyle and the clothes. But the performance. It is hard to get a sense of the character of an author who has been dead for over a century and left no recordings behind would be but I can fairly much guarantee that it would not have been like the mad pantomime performance that Stevens turns it into, one minute play-acting for his children, the next pretending to argue with the ghosts of his own creations, while stumbling from incident to incident with wide-eyed wonder. The scenes with him trying to come up with a name for Scrooge like a hopped-up opium fiend leave you laughing more than wowed.

Which does neatly bring us to one of the most lunatic aspects of The Man Who Invented Christmas. Namely that its major sections of the film involve Dickens arguing with the characters from A Christmas Carol as he tries to wrestle the plot into place. It’s an absurd plot device, least of all for the fact that that is not the way authors come up with characters and plots. Even giving The Man Who Invented Christmas the stretch of imagination to accept it as a plot device, it seems ridiculously ignorant of the way that an author constructs a story.

Part of the plot’s requirement is that Dickens originally intended both Scrooge and Tiny Tim to die. But looking at the story, it is impossible to believe that Scrooge would have been written in with anything other than a redemption arc or that Tiny Tim was introduced as a character for the sole purpose of allowing Scrooge’s misanthropy to thaw and to tug our heart-strings. I mean, is there any way that you can seriously believe that Dickens would have dreamt up a story intended for Christmas audiences in which he allowed these characters to die? No, the reality is that that is the way and the enormously predictable arcs with which either character was conceived and that it in an utterly absurd piece of dramatics on the part of the film to try and make us think it was ever otherwise.

The film is directed by Bharat Nalluri, an Indian-born director who is mostly resident in the UK. Nalluri first entered genre material with his third film, the forgettable The Crow: Salvation (2000) and has spent a career in British and occasionally US television and the odd film such as Miss Pettigrew Lives for a Day (2008) and Spooks: The Greater Good (2015).