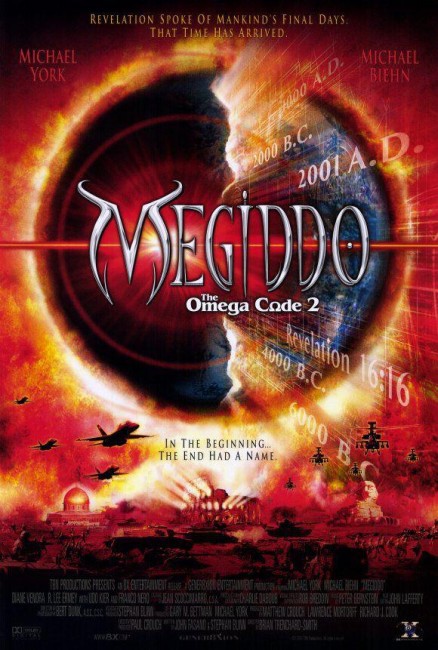 aka Megiddo: The Omega Code 2

Stone Alexander is the son of media baron Daniel Alexander. He is sent to a military school in Italy where he rises to the top of the ranks and takes the commanding officer’s daughter Gabriela as his wife, all aided by the forces of darkness. He goes on to become the president of the European Union and then unites the entire world under his government, dividing it into ten zones. Meanwhile, Stone’s brother David has risen to become the Vice President of the United States. David advises the US President not to join Stone’s one-world government, despite the economic pressure that Stone is putting on the US to do so. During a meeting, Stone kills The President with a handshake that causes him to have a heart attack. This now makes David the President. However, when he adamantly refuses to join Stone’s government, Stone turns all forces against him, forcing David to become an international fugitive. David marshals the armies still left to him in a monumental battle against Stone and the forces of the Devil in the valley of Megiddo in Israel.

The Christian-produced The Omega Code (1999), set around the unfolding of the prophecies in the Book of Revelations and the coming of the Anti-Christ, proved to be a modest hit. Megiddo, which is billed as Megiddo: The Omega Code 2 on the video cover but not the credits of the film, is a sequel. Like its predecessor, Megiddo seeks to break from the ghetto of being a Christian production by casting moderately well-known stars – Michael York, Michael Biehn, not to mention a few names that raise eyebrows such as German actor Udo Kier, best known for some quite out there roles in horror and European exploitation cinema, and as the US President, former drill sergeant and on-screen military tough guy R. Lee Ermey of Full Metal Jacket (1987) fame.

If The Omega Code was an attempt to conduct a version of The Omen (1976) that more accurately reflected the Christian interpretations of the Book of Revelations, then Megiddo is surely the series’ equivalent of Damien: Omen II (1978). It follows the life of the teenage Anti-Christ and, more importantly, parallels Omen II in terms of having a number of scenes set in a military academy where the young Anti-Christ comes into recognition of his powers.

On the other hand, Megiddo is a head-scratcher in terms of trying to work out how exactly it fits in to the chronology established by The Omega Code. For one, there is a considerable change in the nature of Michael York’s central character Stone Alexander – the only character to appear in both films. In the first film, Alexander was someone who became the Anti-Christ after deciding to enact the Biblical prophecies; here he is now a clichéd evil child who has his diabolic destiny spelt out for him from birth. Furthermore, the first film had Alexander killed off before he was able to bring about the Biblical End of the World, while this film has him mounting the battle of Armageddon (clearly the result of the film being afforded a much larger budget).

By and large, Megiddo seems less interested in the clearly prosthelytic mission that Omega Code was fired up by – it has little concern with depicting the actuality of the Biblical prophecies and diverts off more into conducting itself along the lines of the clichés of the End Times horror film a la The Omen and imitators. Thus the Anti-Christ comes accompanied by sinister lackeys, engages in secret occult rituals, is surrounded by demonic shadow creatures, has some interesting novelty effects of being able to produce locust swarms from his mouth and flare-ups of flame from fireplaces, not to mention the arsenal of novelty (albeit PG-rated) deaths – a paintball gun pellet that turns into a real bullet wound and a cardiac infarction-inducing handshake. By comparison, the original was not at all interested in effects, novelty deaths or the horror element.

The film also takes the opportunity of a bigger budget to go on location in Italy and maximizes the scenery to gorgeous effect during the early scenes. Certainly, in terms of writing, Megiddo falls into the odious political outlook of the Christian Right – the Anti-Christ’s ideals are ones that are directly opposed to notions of American freedom and democracy (where by implication the American way of life is one that is following the true Christian path).

The direction of Megiddo has been handed over to Australian émigré Brian Trenchard-Smith. Brian Trenchard-Smith emerged out of Australian exploitation cinema in the 1970s. He once made a couple of good films, the children’s film Frog Dreaming/The Quest (1986) and the futuristic social satire Dead-End Drive-In (1986), but following his emigration to the US, he turned out several excruciatingly campy horror films, Night of the Demons 2 (1994), Leprechaun 3 (1995) and Leprechaun 4: Leprechaun in Space (1996). One isn’t sure whether Trenchard-Smith signed on here out of personal religious convictions – he did after all make Night of the Demons 2, which was supposedly designed as a message film for the Catholics – or simply as a hired gun. To his credit, Trenchard-Smith plays the show seriously. Unfortunately, his time served making Leprechaun sequels has had its effect and Megiddo is terrible.

A large part of Megiddo‘s terribleness is down to the unrestrained bad acting of Michael York. With his pained and elocuted over-enunciation, York is an actor who seemed to rise to a level of skill that he clearly wasn’t up to by being cast in heroic roles in the 1970s but was then relegated to much supporting B villainy in the 1990s and beyond. Michael York also takes a co-producer credit on Megiddo and this has allowed him the opportunity to let out all stops. Alas, when he is trying to act evil, York’s performance descends into hammy posturing. The speeches he delivers are ridiculous and Stone has zero threat as a character. It is a performance of ludicrous posturing.

Diane Venora is not much better as his wife, which she plays as the cliché of an Italian hausfrau. In both cases, the younger actors that portray either role during the early scenes, Noah Huntley and Elisa Scialpi, give far better performances than the adults. A clearly slumming Michael Biehn at least gives his customary intensity in the nominal hero role.