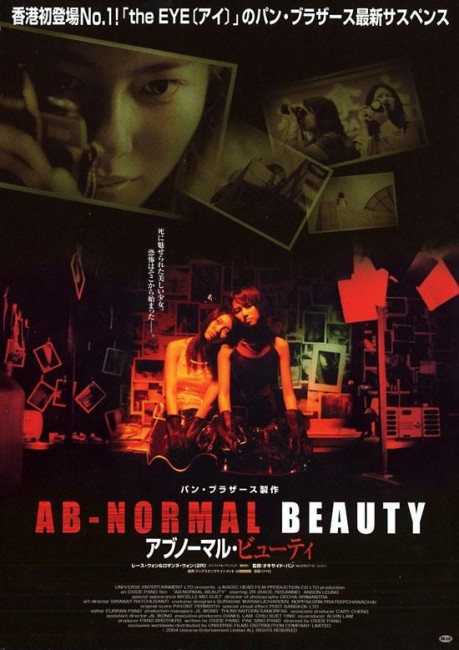 Jiney is an art student. She is bored with the usual subjects in the photographs she takes until she comes across a man who has just been killed in a car crash scene and photographs the body. She feels excited by this and starts to obsessively photograph death wherever she finds it – paying a merchant to kill chickens for her, arranging dead birds on the pavement, photographing a suicide. She makes Anson, a guy who has a crush on her, strip and then throws red paint across him and threatens him with a knife while taking photos. Her girlfriend Jas discovers that Jiney is starting to collapse mentally and persuades her to destroy all the negatives. Someone then starts sending Jiney photographs and videotapes of people that they have abducted and are torturing and killing.

In recent years, Thailand’s twin brothers Danny and Oxide Pang have risen to prominence with films such as Bangkok Dangerous (1999) and in particular the enormous acclaim of the ghost story The Eye (2002). They went on to make two sequels to this, The Eye 2 (2004) and The Eye 10 (2005), and a number of other genre works like the fantasy film Re-Cycle (2006), the Wu Xia film Storm Warriors (2009) and The Child’s Eye (2010). They were brought to the US for their English-language debut with the disappointing The Messengers (2007) and the English-language remake of Bangkok Dangerous (2008) with Nicolas Cage. Oxide made Ab-Normal Beauty solo, with Danny merely taking a co-producing position. On his own, Oxide has also directed the earlier precognition film Who is Running? (1997); an episode of the ghost story anthology Bangkok Haunted (2001); the ghost story Diary (2006), the quasi-supernatural detective story The Detective (2007) and the horror film Sleepwalker (2011); as well as wrote/produced The Remaker (2005).

Ab-Normal Beauty ventures into a mini-genre of films dealing with perverse female fetishes. We have seen similar works in recent years with the likes of Kissed (1996) and In My Skin (2002), which deal with respectively women who have necrophiliac and self-mutilation obsessions. Ab-Normal Beauty ventures into some applaudably perverse territory in this regard – we watch Race Wong getting a butcher to chops the heads off chickens for her and arranging dead birds on the sidewalk. Especially good is a charged scene where she gets Anson Leung to strip for her, throws a bucket of red paint over him and then starts seducing him before producing a knife, all the while taking photos.

On the other hand, Ab-Normal Beauty tends to be an opaque film. While Oxide Pang does a fine job in placing us inside Race Wong’s obsessions, he does little-to-nothing to explain any of them. He overdoses on fragmented editing and jagged camerawork to represent Race Wong’s state of mind. We get flash fantasies of her imagining blood running down a nude during life drawing class, seeing the photos in her darkroom dripping in blood, images of her putting a white mask across her face and her reflection fracturing – although for all this, we get very little idea of what Race is thinking during these scenes, just Oxide Pang signalling loudly and clearly that she is in a disturbed state of mind (as though obsessively photographing dead bodies and getting someone to slaughter chickens in front of her camera did not already let clue us into this). Psychologists agree that most sexual philias are ones that are embedded in the mind at an early age but Race Wong’s necrophiliac obsession seems to manifest out of the blue one day and there is nothing more to it than that. None of the fractured camerawork and lighting gives us many clues as to why and as a result the obsession seems to take place at a remote distance.

One of the other odd things about Ab-Normal Beauty is how Oxide Pang seems to coyly dance around specifying the exact nature of the relationship between the two girls. The film seems to imply that they are lesbians – Race Wong says she does not like boys, Rosanne Wong gets jealous of Anson Leung’s attentions to Race and they call one another girlfriends – but equally they could just be close friends. It is not until one watches the dvd extras where Oxide comes out and confirms they are gay that this is clarified – someone watching Ab-Normal Beauty without seeing the extras could merely mistake them for being two best friends.

Where Ab-Normal Beauty does work is where Oxide (and Danny) characteristically achieve their best – creating scenes of haunting emotional intensity and otherworldly suspense. Standout is one scene where Race Wong hangs on the balcony of an apartment and swings back and forth on the outside of the railing, letting her body hang from one hand as she swings through the air in an arc to catch herself with the other hand.

The suicide scene has a wonderfully subtle cool – a woman is spotted on top of a building, Oxide cuts away to reactions shots from the crowd below and then back to show that the woman is no longer there, then follows the arc that Race Wong’s clicking camera makes as it follows the off-camera body down to the ground, where we then see the body hitting the ground in the background and Race being the only one to move forward to photography it as the crowd behind her backs away in shock. The film has some incredibly rich lighting schemes with the screen frequently being drenched in colour saturations.

The last third of Ab-Normal Beauty moves away from the opaque mix of perverse obsessions and ambiguous girly friendships and into the grim territory of snuff movies. For a time, the film seems to be heading along the lines of the start of David Lynch’s Lost Highway (1997) in the scenes with Race Wong finding mysterious videotape packages on her doorstep. The film arrives at an intense climax with Race made a prisoner by a masked killer where she manages to turn the tables on him by enjoying the process of her torture, before he hangs himself in her chains as they reach forward to kiss one another. Oxide creates a series of atmospheric scenes in the cellar where she is imprisoned in a chair surrounded by cameras with the killer in a mediaeval metal mask and everything shot in sickly green lighting. There is something to these scenes very much akin to the same year’s Saw (2004). The sequence is only marred by an anti-climactic revelation of the killer’s identity.