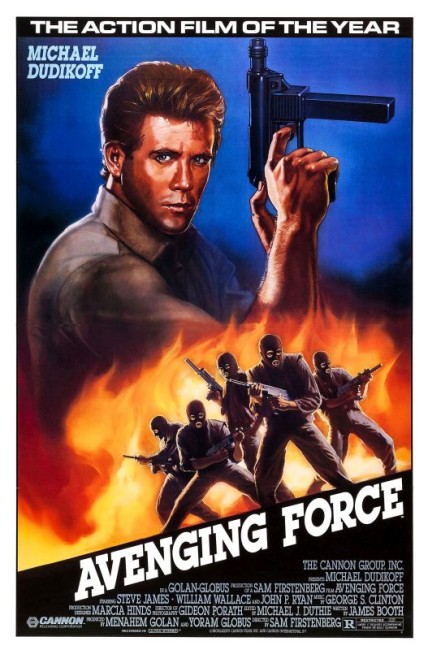 Matt Hunter, a former member of the elite secret service agency G6, is riding in a Mardi Gras parade with his former partner Larry Richards, who is running for Senator in New Orleans. Assassins in the crowd attempt to shoot Larry but Matt is successful in preventing them. Matt subsequently discovers that the right wing supremacist group known as The Pentangle, led by the wealthy Elliott Glastenbury, are the ones behind the assassination attempt. Matt and Larry are successful in fighting off a further Pentangle attack and killing several of their operatives. Pentangle respond by attacking Matt’s ranch, burning it to the ground and killing Larry and his family. They abduct Matt’s twelve-year-old sister Sarah and tell him that if he wants to get her back he must meet them in two weeks in a hunt where they pursue unarmed human prey through the bayous.

During the 1980s, Israeli born cousins and producers Menahem Golan and Yoram Globus were prominent independent commercial filmmakers with their American-based production company Golan-Globus and its distribution chain Cannon. Golan-Globus produced a great many films that ranged from The Happy Hooker Goes to Hollywood (1980) and teen makeout films like the Lemon Popsicle series to Shakespeare adaptations. Golan-Globus’s prolific output included a number of sword and sorcery films – Hercules (1983), Sword of the Valiant: The Legend of Sir Gawain and the Green Knight (1983), The Barbarians (1987), Gor (1987) and Sinbad of the Seven Seas (1989); a series of cheap fairytale adaptations; and several Tobe Hooper films – Lifeforce (1985), Invaders from Mars (1986) and The Texas Chainsaw Massacre 2 (1986).

Avenging Force was a modest actioner to emerge from the heyday of Golan-Globus. (Apparently it started life as a sequel to Invasion U.S.A. but Chuck Norris dropped out and the script was rewritten as a standalone project). It was almost certainly influenced by Southern Comfort (1981), which featured a group of National Guardsmen being hunted through the Louisiana bayous. Avenging Force is also interesting in its prefigural of the theme of white supremacist militias that became regular villains in many 1990s low-budget action films (and not to mention in real-life), as well as anticipating the action movie’s use of the theme of human hunting as a sport conducted by elite groups that would feature in films like Deadly Prey (1988), Death Ring (1993), Hard Target (1993), Surviving the Game (1994), The Eliminator (2004), Darkweb (2016) and The Hunt (2020).

Avenging Force is a competently made effort as 1980s action films go. The film largely exists to propel itself from one action sequence to the next and never concerns itself with too much complexity outside of that. The action scenes have a sufficiently meaty punch. Sam Firstenberg sets up a captivating opening with victims being pursued through the bayous in the rain and then killed by shadowy figures wearing variously white or strangely ornamented masks and bandanas.

There are some tough and energetic sequences with Michael Dudikoff and Steve James fighting the assassins around a dock area and in a burning house. The film gains its feet during the often brutal survivalism of its extended climax with Michael Dudikoff running through the bayous facing various masked samurai sword, shotgun and crossbow wielders and a wrestler in hand-to-hand combat, and a real smash-’em-up sword and mace showdown with John P. Ryan in the final scene.

The film is reasonably budgeted, although occasionally Golan-Globus’s often penny-pinching production values do show through – the Mardi Gras scene, for instance, economically takes place around a single street corner, a hotel frontispiece and a parade float where, as soon as the action begins, the other parade attendees all mysteriously vanish.

Michael Dudikoff, a B movie action star who came to stardom thanks to Golan-Globus, is reasonable at the action poses, even if nobody will ever accuse him of being a great actor. Far better is Blaxploitation star Steve James. When James takes his shirt off to reveal a buffed body and starts trading punches, he is a joy to behold – like watching a panther in action. (Even if he, rather improbably, is surely the only candidate in the history of US politics willing to wade in and start trading fisticuffs with his opponents). Avenging Force‘s great crime is that kills Steve James off halfway through and lets the far less charismatic Michael Dudikoff be the one to carry the film through the principal action sequences.

The lead villain is John P. Ryan, a solid trouper through numerous B movies, who had his finest role in Golan-Globus’s best ever film Runaway Train (1985). Ryan has a good deal of fun, even if the role remains lightweight in terms of depth and motivation. He makes the rather perverse threat to Michael Dudikoff: “If you accept our invitation [to the hunt], you’ll find your sister there virgo intacto” and later prepares to auction off the twelve-year-old niece’s cherry to the highest bidder in a Cajun whorehouse.