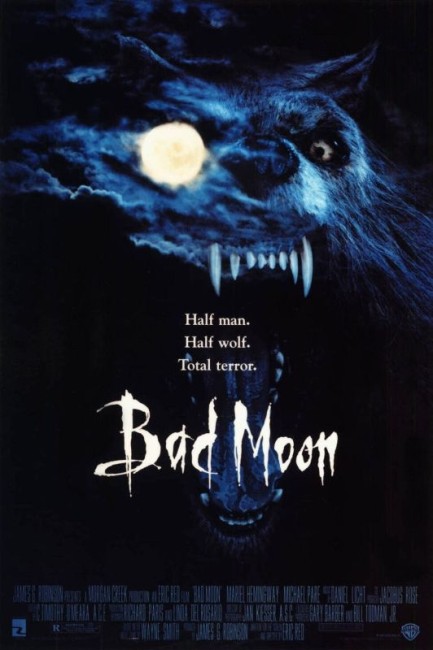 Anthropologist Ted Harrison returns from an expedition to India and goes to stay in a caravan out the back of his sister Janet’s house. While in India, Ted was attacked and gored by a werewolf. Now each night, he handcuffs himself to a tree in the woods to restrain himself as he transforms into a werewolf. However, Janet’s dog Thor takes a dislike to this invader in its domain and a territorial dispute ensues between the two.

None of Eric Red’s directorial efforts are bad films by any means – in particular, Cohen and Tate is a well worthwhile road movie thriller. However, the relative failure of any of these to set the movie-making world alight leaves one with the increasing suspicion that the successes of The Hitcher and Near Dark belonged more to the bravura style that their respective directors brought to the projects.

Bad Moon is a werewolf film. Eric Red offers an amusing spin on the theme – that of the werewolf and the dog of the household squaring off in a dispute over whose territory the place is. Red conducts everything quite competently in the director’s seat – he even manages to get a performance of sorts out of the usually wooden Michael Paré.

In many other aspects, Bad Moon disappoints and leaves you wondering how much more it could have been. Part of the problem here is the film’s length – a surprisingly short 80 minutes that leaves it feeling dramatically slight. Red has barely set up the situation when he seems to cursorily jump to the climactic showdown. One cannot help but think a middle act would have filled the film out to a far more dramatically satisfying whole.

The most disappointing aspect of Bad Moon are the werewolf effects. It is not that there is anything wrong with them – they are technically impeccable and have an impressive fluidity of movement. However, the end effect is thoroughly unconvincing – the werewolf looks like one of those plastic Classic Creature kitset models. Any effectiveness is considerably undercut by the transformation scenes, which resort to cheap and unconvincing morphing effects.

For all the innovation in digital effects technology that Terminator 2: Judgment Day (1991) introduced with the morph in the early 1990s, there have been a bare handful of films that have justifiably used it – organic shapes simply do not transform with the fluidity of a morph. For a time and until its supplantation by full-blooded CGI effects, the morph supplanted more costly air-bladder transformation effects. Despite such, classic physical makeup effects films like The Howling (1981), An American Werewolf in London (1981), The Thing (1982) and Fright Night (1985) still retain an infinitely greater edge over the eminently forgettable digital effects transformations in films like Bad Moon and From Dusk Till Dawn (1996).