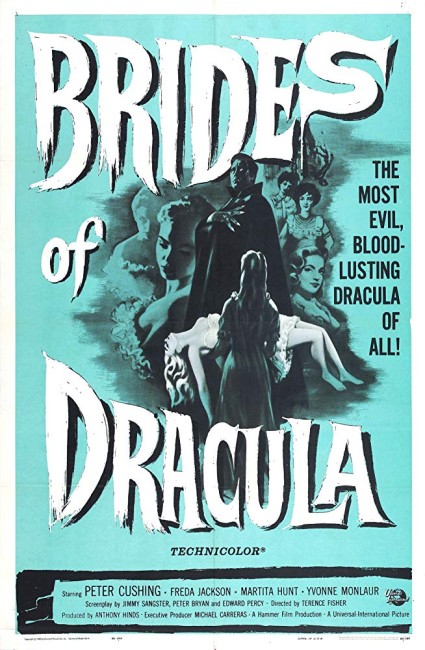 Marianne Danielle, a young schoolteacher on her way to take up a position in Transylvania, is abandoned in a village by her coach driver. She ignores the warnings of the locals and accepts an offer from the Baroness Meinster to spend the night at her castle. At the castle, she meets The Baroness’s handsome son whom the Baroness keeps chained up. He tells Marianne how the Baroness has usurped his rightful lands and pleads with her to free him. She does so, unaware that he is a vampire. Meinster then proceeds to vampirize his mother and comes after Marianne as she journeys on to her school. Luckily for her, Dr Van Helsing is in the area, hunting down the disciples of Dracula.

Hammer Films had a huge success with Dracula/The Horror of Dracula (1958). It, along with its predecessor The Curse of Frankenstein (1957), revolutionised the British film industry, creating a boom in English horror that would last for the next two decades, as well as creating stars out of Christopher Lee and Peter Cushing and making director Terence Fisher into a cult figure. Dracula‘s success mandated a sequel – indeed, The Brides of Dracula was the first of eight sequels that Hammer would mount to Dracula. (See below for the other Hammer Dracula films).

Unfortunately when it came to The Brides of Dracula, Hammer were stuck with the absence of star Christopher Lee who, concerned that he was becoming typecast, decided not to return to the role until he had established himself as a serious actor first – something that would not happen for another six years with Dracula – Prince of Darkness (1966).

Trying to create a Dracula film without any Dracula present proved a substantial obstacle for Hammer to work around – but Terence Fisher, screenwriter Jimmy Sangster and co at least manage to bring Peter Cushing back and then add a cursory preamble about Dracula having many disciples. The result is such a well accomplished film that you hardly notice – although the fey David Peel makes for a pallid substitute for Lee and the reasons for Van Helsing to be there are contrived.

The Brides of Dracula emerges as one of the occasions where a sequel favourably compares to its predecessor. The script’s initial set-up, with all manner of intriguing twists and drawing the heroine into a trap, is frequently ingenious. Terence Fisher directs with his customarily florid hand and the film is filled with a number of classic sequences. There is an extraordinarily brutal scene where Van Helsing is infected with a vampire bite and is forced to cauterise his hand with a branding iron and then pour holy water into the wound to stop himself becoming a vampire. In another scene, we see an old woman encouraging a new vampire to dig its way up out of the grave. The climax, wherein Van Helsing jumps out of the window of a windmill, landing on the vane and turning it to trap Meinster in the shadow of a giant cross, is almost worthy of the climax that topped the first film.

Peter Cushing has customary commanding presence. There are also fine performances from the wonderfully imperious Martita Hunt and the coolly haughty Freda Jackson. Miles Malleson proves to be a scene-stealer in an amusing performance as a pill-popping, wine-imbibing doctor.