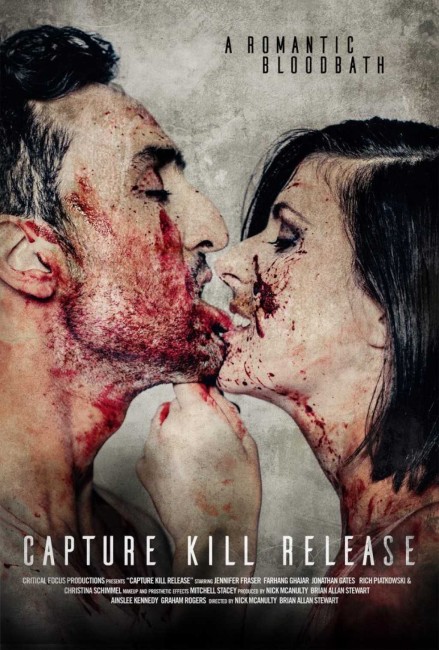 Jennifer and Farhang, a Toronto couple, embark on a plan to murder somebody for the thrill of it. They buy a video camera and begin filming themselves as they select equipment and outfit their basement. Jennifer bumps into a businessman in the street and he insults her. Afterwards, she becomes obsessed and follows the man, discovering that he is having an extramarital affair. She selects Gary, a homeless guy who lives in their neighbourhood, and invites him to dinner. When Farhang finds what she has done, he is horrified but is forced to go along as she drugs and then kills Gary. This leaves a rift between them afterwards. However, Jennifer becomes obsessed with continuing their plan and targeting the rich man.

Capture Kill Release is a Canadian-made micro-budgeted Found Footage horror from Nick McAnulty and Brian Allan Stewart. The two had previously worked together on the non-genre comedy Uncle Brian (2010), which McAnulty solo directed with Stewart as co-writer and co-producer. Capture Kill Release played several horror festivals without obtaining much notice.

This is a film that looks as though it should have been effective on paper. There is a good idea of using the Found Footage film to take us inside the activities of a duo of killers. The surprise is that this is an idea that has not been done in Found Footage before. The nearest there would be is Man Bites Dog (1992), one of the prototypic Found Footage films, a black comedy about a serial killer explaining his technique to a documentary crew, and The Great American Snuff Movie (2003), a series of grim home movies taken by a serial killer. Although neither of these aim for the matter-of-fact kitchen sink realism that Capture Kill Release does.

There is a certain effectiveness to the scenes of Farhang Ghajar and Jennifer Fraser wandering through hardware stores and selecting equipment or outfitting their bathroom for the planned killings. Both the actors affect a matter-of-fact nonchalance in their talk about murder. You also get the impression that much of the film was improvised between the two of them. You feel either that you should be drawn in by their casually disturbed psychopathology – the direction I think that McAnulty and Stewart wanted to take the film – or else the black comedy as everything starts to not go according to plan.

Unfortunately, Capture Kill Release doesn’t work. All it felt like was two actors wandering around pretending to be nonchalant and casual about planning murders. You never get any insight into why they decide to do this. Which is fine but when Farhang Ghajar decides that he does not want to go through with the plan, this feels like motivation that comes out of the blue, especially given that he was so enthusiastic and even turned on by what they were planning a few scenes earlier – it is just a flick of the plotting switch the script has made as opposed to you feel like he his standing up because his character’s principles are violated.

As most of the film is based around the interaction of these two, the lack of grounding makes it feel like two actors playing at being nonchalant rather than a couple interacting and going over the edge. There are only a couple of scenes where things work with a certain visceral buzz – one where a demonstration of various holds over the bathtub results in them getting turned on and having sex; another with the grimness of Farhang having to cut up a body in the bath.