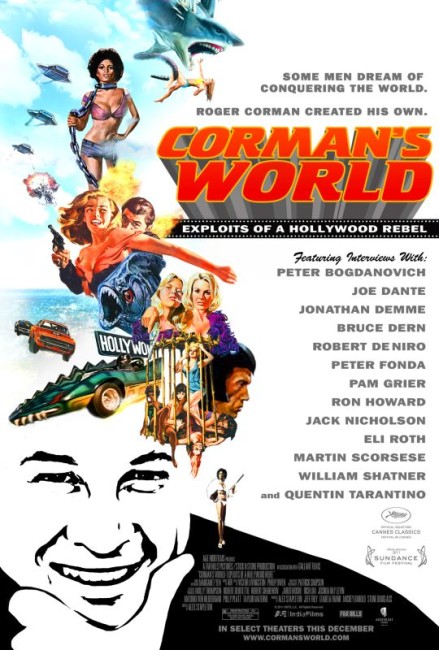 Corman’s World: Exploits of Hollywood Rebel is a documentary about legendary B-movie producer and director Roger Corman. In the 1950s, Corman began producing films starting with Highway Dragnet (1954) and then began directing with Five Guns West (1955). During the late 1950s, he directed out a great many B movies that have gone onto enter into legend, including It Conquered the World (1956), Attack of the Crab Monsters (1957), Not Of This Earth (1957), A Bucket of Blood (1959), and most famously The Little Shop of Horrors (1960). Corman gained critical standing in the 1960s with his series of lavishly made Edgar Allan Poe adaptations beginning with The House of Usher (1960).

Corman is equally famous for having given breaks to numerous later-to-be-famous names including Francis Ford Coppola, Ron Howard and James Cameron (along with those listed below) who he was able to employ for peanuts because he knew they were desperate to get breaks in the movie business. After 1970, Corman retired from active directing and formed his own production company New World Pictures and the later Concorde-New Horizons, where he has produced over 400 films.

Corman’s World is a tribute to Roger Corman’s career. One is amazed at the number of high-profile people who have worked for Corman in their early days that the film manages to obtain interview time with, including names like Peter Bogdanovich, David Carradine, Joe Dante, Robert De Niro, Bruce Dern, Peter Fonda, Pam Grier, Ron Howard, John Sayles, Martin Scorsese and William Shatner, as well as Corman himself and his sometimes producing partners, wife Julie and brother Gene. The filmmakers even manage to get in a reasonable length interview with Jack Nicholson who is shown shedding a tear for Corman towards the end of the film.

The film covers Corman’s beginnings, how he sank his own and borrowed money in to produce Monster from the Ocean Floor (1954), then went onto make the original The Fast and the Furious (1955) and struck up a three-picture producing deal that became the backbone of American International Pictures (AIP). There is not as much time given over to some of the films that Corman is known for on this site – his B-horror and science-fiction films of the 1950s and the Edgar Allan Poe series (see below for titles) – as I would like to have seen. Two key films that the documentary focuses on most are surprisingly two of Corman’s non-genre works – the flop racial drama The Intruder (1962) and the biker film The Wild Angels (1966). The film ends showing Corman receiving a Lifetime Achievement Award from the Motion Picture Academy in 2009.

I didn’t feel that Corman’s World particularly covered any material that gave me substantially more insight into Roger Corman as a filmmaker that I had not gleaned elsewhere. One of the interesting theses the film argues is its title one, Exploits of a Hollywood Rebel. Corman is never a filmmaker I would have considered an outlaw or someone who is willing to push boundaries; rather a filmmaker who seems more about cannily exploiting the trends that others have established beforehand. The film does point to his making counter-culture works like The Wild Angels, which Peter Fonda directly attributes as leading to the success of Easy Rider (1969), the LSD film The Trip (1967) and his venture into making one politically charged work with The Intruder (a direction it should be noted that he abandoned soon after).

To argue its case, the film takes Corman’s own comments of how he became resentful of authority after spending time in the US Navy. It also points to the spate of teenage movies in the 1950s and their subtext of rebellion against parental authority as symptomatic of his inner rebel (although the film fails to note that this teenage fad was started by other filmmakers rather than Corman, which weakens its thesis somewhat – although he was certainly one of the most prolific people exploiting this particular niche). If anything, the documentary makes the case less that Corman is a rebel than he is a canny businessman who thumbs his nose at outside interference and prefers to work according to his own rules.

The documentary covers most of the highlights of Roger Corman’s career. It becomes more a work of tribute than any kind of critical work that digs beneath Corman’s drive and artistic/entrepreneurial spirit. The great disappointment of the film is that it never covers some of the notorious stories that surround Corman. Nothing is done to debunk any of the myths that have grown up around The Little Shop of Horrors, which Corman has promoted as being shot in two days.

Very little is discussed about Corman’s legendary parsimoniousness. About the only stories regarding this, the most notorious aspect of the Corman legend, that we get is Peter Bogdanovich’s telling how Voyage to the Planet of Prehistoric Women (1968) came about when he was asked to shoot material to add to Russian sf film footage that Corman had obtained; some discussion of the hilariously ad hoc cobbling together of The Terror (1963) and how its plot makes no sense; as well as a visit to the set of the making of Dinoshark (2010) where actor Eric Balfour proves surprisingly candid about the wild west nature of the shooting.

In that Corman regularly came up with ways to cut costs by flaunting union rules and shooting outside the US, one feels disappointed at the timidness of the documentary in being willing to venture into this subject and/or tackle issues that may puncture Corman’s own myth-building. After all, when the amusement of some of the stories of Corman’s movie-making practices are pared away, he is just another huckster trying to make maximum profit while paying out as little as possible and getting around as much as he can in the way of legal obligations. You wonder at the end of it, would such an awe-struck and hagiographic treatment be made if this were a documentary charting the life of some corporate executive who was celebrating his cleverness in avoiding regulations and paying employees minimum wage?