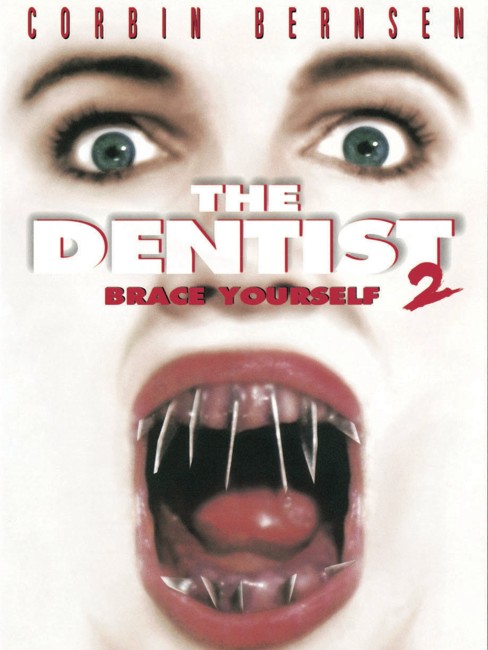 The psychopathic dentist Dr Feinstone escapes psychiatric incarceration and sets up under an assumed name in the small town of Paradise, Missouri. After he kills the town’s incompetent dentist, Feinstone is persuaded to set up practice. There he tries to resist his psychopathic urges. However, as he becomes involved with the woman next door and others start finding clues to his identity, jealousy rears its head and he finds history starting to repeat itself again.

This was director Brian Yuzna’s sequel to The Dentist (1996). Brian Yuzna is a director who never makes a less than interesting film and The Dentist 2 is above average as sequels go. Most horror sequels – the Friday the 13th series, the A Nightmare on Elm Street series, the Omen series, the Stepfather films – quickly settled down into a conveyor belt line of shock set-pieces that repeat with limited formula what the original did best in most cases. The Dentist 2 may be notable in bucking this tendency – the better part of the plot features the central character trying to resist his psychopathic urges. Of course, Yuzna never entirely abandon what made the first film and pumps the interim until Corbin Bernsen inevitably goes psycho again up with various dream sequences and fantasies. Certainly, The Dentist 2 is commendable for being more story driven than most sequels.

And once it gets there, the film takes one back with Yuzna’s extraordinary degree of sadism. The film plays on everybody’s fear of the dentist with unnerving in-the-mouth closeups of teeth being injected and drilled, cockroach-filled mouths, giant tongues and the like. Near the end, Yuzna conducts a remarkably cruel set-piece with Corbin Bernsen having overweight Susanne Wright tied up in the dentist’s chair and probing into an exposed nerve to make her tell the truth. When someone comes to the door, he holds up a pair of forceps and threatens her – “If you make a sound, I swear I will rip your vocal chords out with this.” Upon returning to the interrogation, he starts pulling out one of her teeth unanaesthetised every time he does not believe she is telling the truth. The climactic chase features the wild image of Corbin Bernsen pursuing Jillian McWhirter and attempting to drill her teeth with a three-foot long power drill. Corbin Bernsen (who takes an Associate Producer role) gets into the role with considerable relish, making the part a credible balance of conviction and dementia.