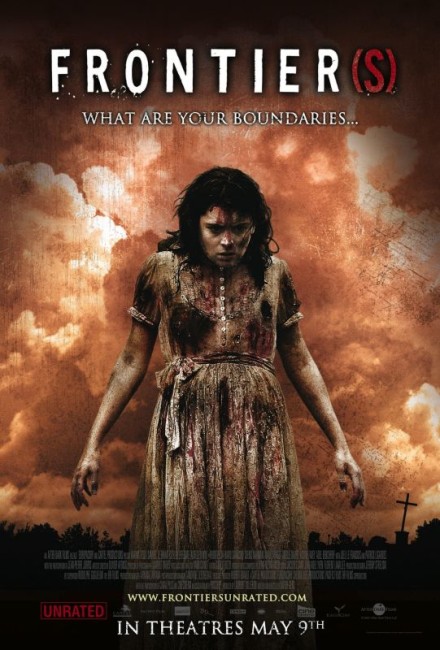 Yasmine is three months pregnant but wants to abort the child. France has just voted in an ultra-right wing government. Yasmine, her brother Sami and three other Middle Eastern friends are involved in an altercation with security forces during which a police officer is badly beaten and Sami is shot. Yasmine rushes Sami to hospital but he dies and she has to flee as the police come. They head for the Dutch frontier in two separate cars. Tom and Farid stop at an inn where they are seduced by two girls and afterwards are attacked and killed by the girls’ family. Yasmine and Alex arrive, only to be chained up by family members. Yasmine then learns that she is to be declared the wife of Carl, the eldest son of von Geisler, the family’s ex-Nazi patriarch.

Frontier(s) is another of these Euro Backwoods Brutality films. It was the directorial debut of French director Xavier Gens who went on to direct the high profile English-language videogame adaptation Hitman (2007) several months later that same year on the basis of Frontier(s). Xavier Gens is a close associate of Luc Besson, director of Nikita/La Femme Nikita (1990), The Professional/Leon (1994) and The Fifth Element (1997), who also Besson acts as an executive producer on Frontier(s).

Frontier(s) feels like a copy of Texas Chain Saw Massacre by the numbers. Xavier Gens has borrowed all of the plot basics – a group of people who unwittingly stray into the backroads lair of a family of brutal psychopaths who proceed to brutalize, torture and kill most of the group, leaving a single woman survivor who eventually fights back. Gens does nothing in particular with the scenario other than to rehash it – oh, and amplify the level of gore to what must surely be a blood-drenched extreme for the genre.

The one interesting thing that Gens does is set Frontier(s) against a backdrop of racial tensions. The group fleeing to the frontier are all of unspecified Middle-Eastern ethnicity, while the group they come up against consists of an aging Nazi patriarch and his family. France is also seen as being in the throes of an extreme right-wing government with the protagonists being forced to flee after getting into a scuffle with security forces for never mentioned reasons. This digs into contemporary headlines about race riots in France’s ethnic neighbourhoods, as well as the fears that swept France in 2002 when National Front founder Jean-Marie Le Pen seemed in danger of winning the election.

However, despite setting up such a rich subtext, Xavier Gens never does anything with it – you could easily replace the characters in the film with the backwoods family in The Texas Chain Saw Massacre and it make no difference to anything that happens. The Nazi patriarch even seems to blur his morals to allow the Middle-Eastern heroine to marry his son, something that surely would have been regarded with total outrage by any pure-blooded Nazi.

Where the whole of Frontier(s)‘ raison d’etre lies is in its scenes of carnage and brutality. Xavier Gens leaps into this with an enthusiasm that puts many of his competitors to shame. Things rise to a particularly entertaining level at the climax where Karina Testa finally makes an escape, dispatches Patrick Ligardes by shoving him onto a running buzzsaw, spaying herself and the entire room with gore, dispatching the two sisters by detonating a gas canister with a shotgun blast, before engaging in hand-to-hand combat with the remaining sister (Estelle Lefebure) and tearing her throat out with her teeth. The final shot of the scene where a completely blood-soaked Karina Testa stands up screaming in slow-motion leaves us with a genuine sense of her emotionally shattered trauma.

On the other hand, when this over-the-top bloodletting and brutalisation is the only song that Frontier(s) has to sing it becomes somewhat repetitive. The cumulative effect of the film is one of someone who spends 109 minutes shouting into your face – while the initial effect is undeniably intimidating, the prolonged insistence of it eventually becomes tiring.

Xavier Gens next went onto make the videogame adaptation Hitman (2007), the harrowing The Divide (2011) about the survivors of a nuclear holocaust slowly descending into barbarism trapped in a fallout shelter, the X is for XXL segment of The ABCs of Death (2012),, the exorcism film The Crucifixion (2017) and Cold Skin (2017) about people of a lighthouse at siege from amphibian creatures. He has also produced Cell (2016).