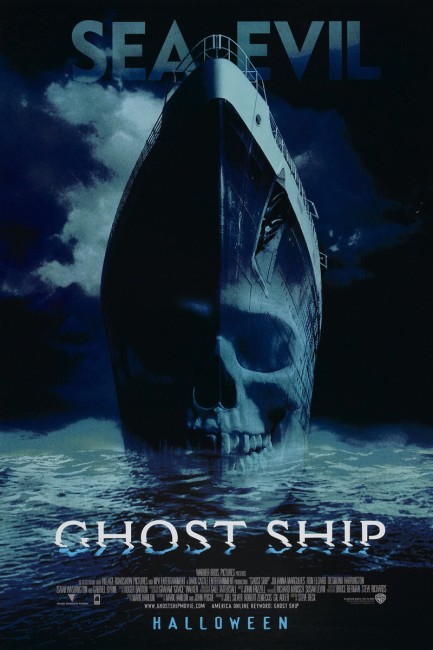 In Alaska, the crew of the commercial salvage tug Arctic Warrior are approached by pilot Jack Ferriman who offers to lead them to the whereabouts of a ship that is floating in international waters and free for salvage. They set sail, finding an abandoned luxury liner, which Captain Murphy realizes is the Antonia Graza that disappeared in 1962. All their fortunes seem made when they find a supply of gold bars aboard. As they make preparation to tow the Antonia Graza into port, it starts coming to life around them and they see ghostly apparitions. An explosion then sinks the tug and they are forced to remain aboard the Antonia Graza where it becomes increasingly apparent that the supernatural forces aboard the ship want to kill them and claim their souls.

Ghost Ship was the third A-budget horror film to emerge from Dark Castle Entertainment. Dark Castle was formed by Gilbert Adair, producer of Tales from the Crypt (1989-96), Joel Silver, producer of The Matrix (1999) and Robert Zemeckis, director of Back to the Future (1985). Previously, Dark Castle produced two remakes of old William Castle films with House on Haunted Hill (1999) and Thir13en Ghosts (2001). (See below for the subsequent Dark Castle films). Ghost Ship was directed by Steve Beck, a former Industrial Light and Magic art director who made his directorial debut with Thir13en Ghosts.

Ghost Ship is the first of Dark Castle’s films not to be based on a William Castle film and is an original script. Although it feels like it could easily have been a remake. It rehashes the basics of the haunted ship story a la Death Ship (1980) or such science-fictional variations as Deep Rising (1998) and Virus (1999) (from which the tug crew victim spread seems to have been virtually photocopied). Or for that matter the two previous films that bear the same title – Val Lewton’s little seen but excellent psychological horror The Ghost Ship (1943) and the dreary British ghost story Ghost Ship (1952). Indeed, 2002 seemed to bear a mini-revival of the haunted ship theme with David Twohy’s superior haunted submarine drama Below (2002) also in release.

Ghost Ship was greeted with some very bad reviews when it premiered. As with Steve Beck’s Thir13en Ghosts, it seems caught halfway between being an occasionally spooky haunted house story and a big CGI effects vehicle. Although, contrary to the big and brainless label that Ghost Ship was immediately slapped with, Steve Beck does a passable job in building atmosphere. It is just that the atmosphere is perpetually being undercut by jumps, explosions and pop-up effects.

Ghost Ship is not as bad as say The Haunting (1999) where all psychological tension and atmosphere was battered into submission and entirely drowned out by CGI effects. Alas, for all Ghost Ship‘s selling itself as a big effects vehicle, these effects scenes are forgettable. There is a cool gory opening scene where a released wire ends up severing through the bodies on an entire dancefloor, but alas the rest of pop-up effects – reconstituting ballrooms, lockets passing through hands, tendrils creeping across ceilings – have all been given away by the film’s trailer and tv promotional campaign and there is little else to the film.

While Steve Beck does an adequate job of building atmosphere in the early parts, Ghost Ship is far less effective in the latter half where it introduces the poorly developed character of a soul collector. This comes out of left field, is more comic-bookish than convincing and is never developed or explained in an adequate way. Nor is it particularly clear what the significance is of the gold bars that cannot be removed from the ship. One eventually realises that Ghost Ship is attempting to work in the myth of Charon, the ferryman from Greek myth who transports souls across the river to the land of death (ferryman/Ferriman, a treasure of gold to pay passage), but the allusion is very unclear.

Ghost Ship is not a film that places any importance or onerous duty on its actors. Gabriel Byrne, the most well-known name among the cast, gives a reliable and convincing performance and the others present fill out thin roles with suitable anonymity.