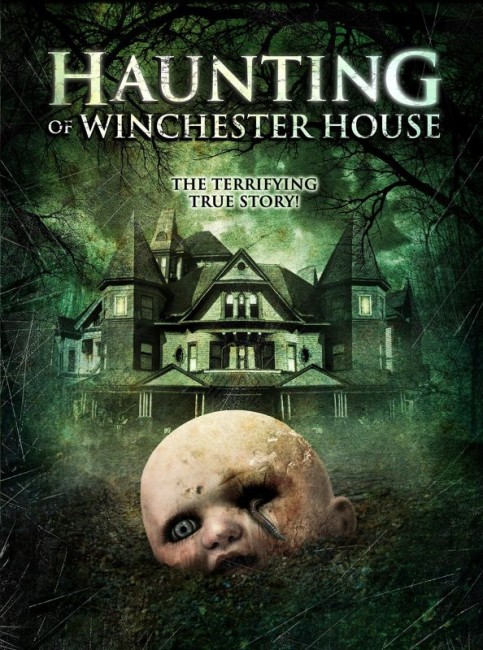 Drake and Susan Grenier take up a caretaking job at the famous, reputedly haunted Winchester Mansion and move in with their teenage daughter Haley. No sooner are they there and they are surrounded by terrifying ghostly forces. After the spirits snatch Haley, Drake and Susan are forced to call on the services of neighbourhood paranormal investigator Harrison Dent.

Winchester House is a real-life locale (in San Jose). It has gained much fascination as an allegedly haunted tourist attraction. The house was the construction of Sarah Winchester, the widow of the heir to the company that produced the Winchester Rifle. After the death of her husband, Sarah visited a medium in Boston who purportedly told her that she was haunted by the spirits of all who had been killed by the Winchester Rifle. She started the building of a massive mansion using the substantial fortune she had inherited, believing that she needed to continually add to it to keep away the ghosts. Construction began in 1884 and lasted until her death 38 years later in 1922. The house is a decided oddity, filled with hallways that lead nowhere, doorways that open into walls and an obsession with the number thirteen, all according to her designs. When the house was damaged in the 1906 earthquake, Sarah simply had the sections affected boarded up and left the way they were. The reasons for this are put down to everything from her decaying mental health, lack of expertise in architecture and/or the belief that the maze-like construction would be confusing to the ghosts. The Winchester House later became the basis of the big-budget film Winchester (2018).

With The Haunting of Winchester House, The Asylum hit onto the idea of creating a string of haunted house films all sold with the association of a famous haunting or murder (something that is frequently scanty to the point of near non-existence). Subsequent others among these include Gacy House (2010), Anneliese: The Exorcist Tapes (2011), The Amityville Haunting (2011), A Haunting in Salem (2011), The Haunting of Whaley House (2012), 100 Ghost Street: The Return of Richard Speck (2012) and The Bell Witch Haunting (2013), most of which were conducted in the Found Footage format (although The Haunting of Winchester House is not).

Director Mark Atkins shoots the film cheaply on video. Unfortunately, the flat photography kills the atmosphere that a haunted house film needs to work. The house being used as a location looks nothing like the real-life Winchester House, let alone one that was built in the early 20th Century. Atkins’ jumps are all tiresomely borrowed ones – red herring taps on people’s shoulders, an endless array of peripheral figures moving through the background of shots, shapes moving under sheets/quilts and so on. The score’s constant lurking, shrieking and lunging becomes overhyped in the endless attempts to generate atmosphere so much that it creates none at all.

The film picks up markedly with the introduction of Tomas Boykin’s paranormal investigator. Boykin has a striking piece of explanation where he talks about Stage 1 and Stage 2 ghosts as the difference between those that are stuck in limbo and those that are aware of their existence and much more dangerous. This gives the film a fascinating rationalisation of ghostly activity. The downside of it is that Boykin is abruptly killed off as soon as he starts attempting to exorcise the house and the rest of the film returns to the same level of dreary hyped scares. The plot thereafter goes from trying to generate scares to merely being a drama about giving the past closure. The film also reaches a creaky and well-over worn deathdream ending patented by An Occurrence at Owl Creek Bridge (1961) and most famously The Sixth Sense (1999).