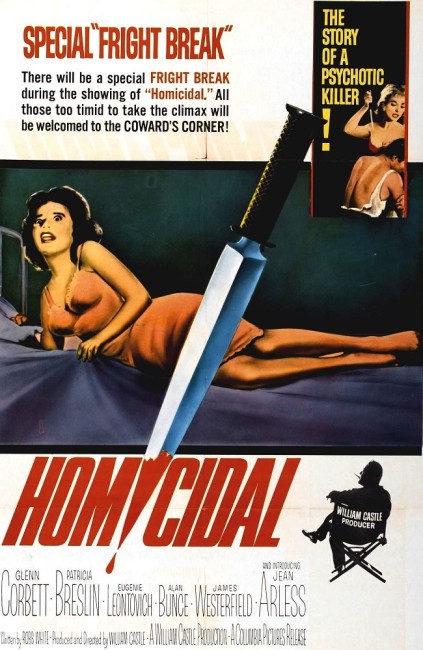 A woman calling herself Miriam Webster gives a bellboy a thousand dollars if he will marry her and then nullify the marriage immediately after the ceremony. However, during the ceremony she stabs the Justice of the Peace and then flees back to Solvang, California, where she works as a geriatric nurse and her real name is Emily. The real Miriam Webster is drawn in when Emily vandalises her florist shop and then starts terrorising her life. Investigation into the murder uncovers a twisted tangle of sexual identities and family secrets.

In the late 1950s, director/producer William Castle gained fame with films such as Macabre (1958), House on Haunted Hill (1959), The Tingler (1959) and 13 Ghosts (1960). These were variants on haunted or Old Dark House themes. Most of the films were routine but were boosted by Castle’s hucksterish gimmicks – winching skeletons across the theatre, wiring seats to give electric shocks, insuring audiences against dying of fright and the like.

Following Homicidal, William Castle abandoned gimmicks and began to churn out a series of Psycho-Thrillers in imitations of Psycho (1960). (It could be argued that Psycho was another gimmick film with Alfred Hitchcock having conducted the very Castle-like gimmick of having theatres contractually guarantee that nobody would be let in after the film started). These included the likes of Strait-Jacket (1964), The Night Walker (1965), I Saw What You Did (1965) and Let’s Kill Uncle (1965).

Castle is still in gimmick mode when it comes to Homicidal, which contains the concept of a Fright Break. This is introduced by Castle himself before the film starts (and before that announced in the trailer). Later in the show a clock appears in order to give the faint of heart a 45 second opportunity to leave the theatre (although the scenes that the Break precede prove lame in regard to the anticipated promise).

William Castle gained a certain amount of respectability when Homicidal was named on Time magazine’s Top 10 films for that year, a distinction that was not even accorded to Psycho the previous year. Despite this, it remains a confused film and one of the lesser works in Castle’s mostly likable canon. Robb White, who turned in some often clever plots for Castle’s pseudo-haunted house films, comes somewhat unstuck here. The first 20 minutes – especially the scenes where Jean Arless pays a bellboy to marry her and then stabs the Justice of the Peace – are fine, with Castle and White creating a bewildering sense of not knowing where things are going from one minute to the next.

After that point, things settle down into more standard thriller mode only to become totally confusing. With Psycho, the film’s clear model, Hitchcock and screenwriter Joseph Stefano were able to sustain the plot through subtle hints and red herrings, but Homicidal fails to attach any type of structure to its revelations or psychology.

The confusion becomes particularly so when it comes to the revelation of Warren/Emily’s gender. Even though the film ends with Castle showing pictures of all the characters and naming the actors playing them, the central question of whether Emily is a man or a woman is left unclear. For many years, the identity of Jean Arless was regarded as a great mystery – the very name of the actress Jean/Gene seeming to suggest a gender ambiguity.

In actuality, Arless was actress Joan Marshall who did a small amount of tv work throughout the decade, including episodes of The Twilight Zone, The Munsters, Star Trek, Bonanza and others, as well as minor parts in half-a-dozen films, the most well-known of which was Shampoo (1974). For Homicidal though, William Castle renamed Marshall as Jean Arless, the only time that she would ever appear under such a name. Arless/Marshall gives an amazingly stilted and weird performance. It is this and the lack of logic the film seems to operate on that exerts a good part of the surreal fascination that the film has for some viewers.

William Castle’s other films of genre note as producer-director are:– as director of Crime Doctor’s Manhunt (1945), the sixth in a series of Columbia crime thrillers, of which Castle directed several, featuring a forensicologist against a split-personalitied killer; the psycho-thriller Macabre (1958); House on Haunted Hill (1959); the classic The Tingler (1959), probably Castle’s best film; the haunted house film 13 Ghosts (1960); Mr. Sardonicus (1961) about a man with his face caught in a grotesque frozen smile; the juvenile comedy Zotz! (1962) about a magical coin; the remake of The Old Dark House (1963) for Hammer; the Grand Guignol psycho-thriller Strait-Jacket (1964) with Joan Crawford; The Night Walker (1965), a psycho-thriller about a dream lover; the prank phonecall psycho-thriller I Saw What You Did (1965); the psycho-thriller Let’s Kill Uncle (1965); the ghost comedy The Spirit is Willing (1967); the reality-bending sf film Project X (1968); as producer of the classic occult film Rosemary’s Baby (1968) for Roman Polanski; as producer of the anthology series Ghost Story (1972-3); Shanks (1974) with Marcel Marceau as a puppeteer who can resurrect the dead; and as producer of the firestarting insect film Bug! (1975).