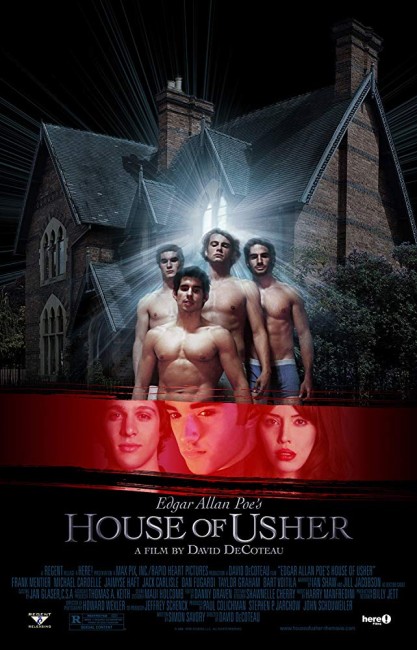 Victor Reynolds receives a request to go and visit his childhood friend and gay lover Roderick Usher at Roderick’s large family home. He finds Roderick ill, suffering from an over-acuteness of the senses. Roderick’s sister Madeline tries to come onto Victor but falls ill. Victor is tormented of ghostly visions of the former handymen that were Roderick’s lovers and have all mysteriously died. Gradually, Victor begins to penetrate the mystery of the House of Usher – that it is a living house and tied to the Usher family’s health. In order for Roderick and Madeline to remain well, they need to make constant human sacrifices to the house.

House of Usher 2008 comes from David DeCoteau, a prolific director of low-budget genre films. DeCoteau started directing in the early days of Albert and Charles Band’s Empire studio, producing works for them and others such as Dreamaniac (1986), Creepozoids (1987), Nightmare Sisters (1987), Sorority Babes at the Slimeball Bowl-a-Rama (1988), Beach Babes from Beyond (1993), Test Tube Teens from the Year 2000 (1994), among a great many others. (See below for David DeCoteau’s other genre films). Although David DeCoteau’s work started out in exploitation T&A in the 1980s and 90s, what has become increasingly more evident by the late 1990s/00s is DeCoteau’s own gay proclivities. More and more openly, his films have come to feature a gay emphasis and numerous scenes of physically buffed young men lounging around bare-chested to the point with House of Usher where the result has become more like a softcore gay film.

House of Usher was one of several Edgar Allan Poe adaptations that David DeCoteau made around this time, along with The Raven (2007) and The Pit & the Pendulum (2009). However, these are adaptations that Poe would have difficult recognising – The Raven was not about a talking raven quoting “nevermore” but about a raven-masked killer slaughtering people at a costume ball, while The Pit and the Pendulum was about a psychologist conducting experiments and killing off people in a gloomy mansion.

Throughout all of these runs David DeCoteau’s predilection for homo-erotica. Edgar Allan Poe would surely be turning in his grave at the thought of The Fall of the House of Usher transformed into a softcore gay work – within the first few minutes, DeCoteau gives us Frank Mentier’s Roderick Usher (affectionately referred to as “Ush”) and his friend Michael Cardelle engaged in a steamy make out session that goes on for several minutes. Even the ghosts get to stand around and haunt while bare-chested and wearing briefs. (The film is decidedly on the softcore side, as we never get the guys any further undressed than a pair of briefs being pulled part way down their buttocks). Indeed, the number of scenes that DeCoteau contrives to find where guys who have been selected for their buffed physiques wander around without shirts on or in their briefs verges on self-parody. As with most of David DeCoteau’s films, the actors have been chosen for their looks/physiques rather than their acting ability – hero Michael Cardelle survives okay, although when it comes to Frank Mentier’s Roderick, lines like “Living in a house of the damned is no easy thing even if it is for one night,” fall laughably flat in his lips.

The disappointment about House of Usher 2008 is that David DeCoteau badly mishandles the atmosphere of the story. The story is dependent on a single mood – that of decay and looming madness with the house echoing an inner state of a mind as it slowly collapses. DeCoteau does get one aspect of the story right that many other film adaptations miss – the house being directly linked to the health of the Usher family, although this is then conflated with stock horror elements like the need to make blood sacrifices.

Typically of David DeCoteau, most of the film plays out around languid dream sequences with guys in their boxer shorts lying around being caressed rather than any attempt to achieve mood. Major aspects of the story like Madeline collapsing from catalepsy and being buried alive have been dumped – she does collapse but is not buried alive; indeed, in David DeCoteau’s gay emphasis, she is largely irrelevant to the story (although, to be fair, she does get to make out with Michael Cardelle in one scene). There is little to no attempt to give the big house that the film is shot in any gloomy or brooding atmosphere, even though this is the essence of any telling of The Fall of the House of Usher. Rather than having the house collapse at the end, DeCoteau opts for a corny “it was all a madman’s delusion” twist ending straight out of The Cabinet of Dr Caligari (1919).