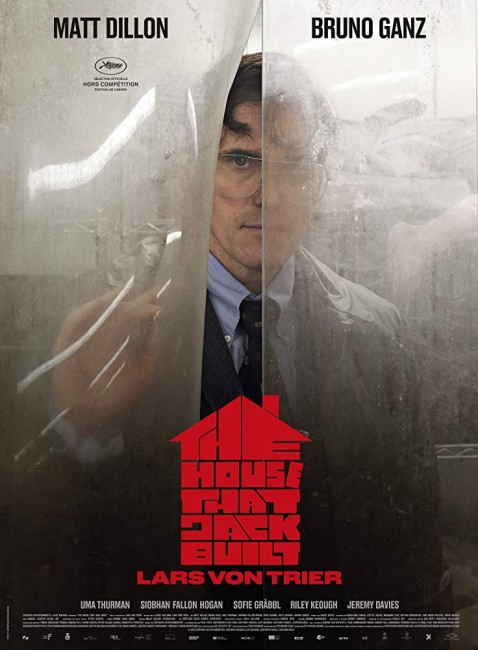 Jack tells his companion Verge that he is a serial killer. He racked up a kill count of more than sixty victims and was given the nickname Mr Sophistication. He illustrates his account with stories of several of his kills. In his methods, Jack was obsessive compulsive about any trace of blood that might have been left at the scene. Though living on an inheritance, Jack also had ambitions to be an architect and kept trying to design a house. He regarded what he did as an art and as they travel together, he and Verge debate the meaning of what Jack did

Lars von Trier is one of the unparalleled geniuses of modern cinema. I’d happily argue he is the finest currently living director at work in the world. He defies much in the way of filmmaking convention. He films exist in a constant state of stylistic reinvention – he made a work of extraordinary visual artifice with Zentropa/Europa (1991) and then followed it by repudiating all of that and creating a new movement that eschewed style in favour of raw, handheld camerawork and lack of canned dramatics with the Dogme 95 school, out of which he made works such as Breaking the Waves (1996) and The Idiots (1998). He sometimes has a blacker than black sense of humour – The Kingdom (1994), The Idiots, The Boss of It All (2006) – but can equally make works that place his audience through an extraordinary emotional ringer as in Breaking the Waves and Dancer in the Dark (2000). Von Trier is an agent provocateur who enjoys pushing boundaries, saying outrageous things and inflaming people – The Idiots, a film about people who play at being intellectually handicapped for the sake of exposing social hypocrisy, or his unfinished trilogy consisting of Dogville (2003) and Manderlay (2005) that is deeply critical of social values in America.

The works that von Trier have put out since 2009 came after a long bout of depression during which he reputedly said he would never work again. He returned from this to make Antichrist (2009), Melancholia (2011), Nymphomaniac (2013) and The House That Jack Built. They are, if you like, works in which he has embraced the dark side of human nature. Before this point, films such as Breaking the Waves, Dancer in the Dark and Dogville all featured women who were near saintly in their suffering. I can only speculate about what happened to von Trier during that period but the themes he seems to be therapeutically working out up on screen all suggest some kind of traumatic reaction to a major betrayal or relationship break-up – Antichrist was claimedly a work about misogyny; Melancholia fairly much concluded that the world was worthy of its coming destruction; while Nymphomaniac subjected Charlotte Gainsbourg to a catalogue of sexual degradations.

By similar token, The House That Jack Built is a catalogue of scenes in which Matt Dillon kills people. In all but the last scenario, the victims are women. During his discussions with Bruno Ganz, Dillon remonstrates about how stupid and gullible women are. There is even a chapter with Riley Keough, whom Dillon refers to as his sole relationship, where he takes delight in nicknaming her ‘Simple’ and much of the scene involves him berating her for her stupidity before killing her.

During these scenes, von Trier inserts a stretch of dialogue where Dillon berates Keough about why it is always the man’s fault – “it is like you are some sort of wandering guilty person without even having harmed a single kitten … women are always the victims and men they are always the criminals”, which is something that well and truly disappears down into Red Pill territory. Just as much as was the case with Antichrist, you feel like The House That Jack Built is an opportunity where von Trier is unleashing a lot of pent up anger against the women he previously regarded as saintly.

Like Nymphomaniac, The House That Jack Built is not a plot so much as a series of individual chapters illustrating incidents from Jack’s life. (In either film, you could fairly much view the chapters in any order). The film is shot in the same handheld widescreen look that von Trier employed on Breaking the Waves and comes without any musical score (apart from during the interludes in between chapters).

The opening scene where Matt Dillon picks up Uma Thurman on the side of the road and she jokingly deconstructs everything that is happening in terms of whether he might be a serial killer before he bashes her head in with a wrench seems a little bit too precious – it has a meta quality that feels like something that belongs more in Scream (1996) and one of its sequels. The slightest of the chapters is the one with Dillon taking Sofie Gråbøl and her children out on a hunting trip.

The chapter with the second victim Siobhan Fallon Hogan starts off with an awkward feel as though Matt Dillon had ad libbed all his dialogue in the scenes with him offering a series of lame excuses to get her to let him in the door. However, once he gets inside, this leads to a blackly funny scene where he strangles her and then hovers in concern asking what he can do to help, propping a pillow under her head, offering a cup of herbal tea from a thermos as she gasps, before straddling her to finish the job. This is followed by an even more blackly funny series of scenes as his OCD kicks in and he has to keep returning to the house to make sure that all of the drops of blood have been cleaned off. This is interrupted as a cop turns up and Dillon expresses concern at Siobhan’s disappearance and stands around indignantly demanding to help, before being ordered out whereupon he drives off, dragging her body away tied on a rope behind his van.

Equally black and funny is the later scenes with him creating a set-up to see if he can shoot a line of imprisoned men with a single bullet that breaks up into an argument with one of the would-be victims (Osy Ikhile), an ex-soldier who points out that the bullet is not a full metal jacket.

Each of the chapters is also interspersed with conversations with Bruno Ganz’s Verge in which Matt Dillon remonstrates on such subjects as art, Gothic cathedrals and dessert wines. Von Trier gives us clips from Glenn Gould playing piano and montages of artworks from Gaugin, William Blake and others. It is a dialogue where von Trier seems to be delving into the depths of human nature, asking how cold, unthinking violence can sit alongside minds that aspires to great works of art. The end of the film peculiarly reveals that Dillon and Ganz are on a trip down to Hell where you realise Verge is meant to be Virgil, the guide from Dante’s Inferno (1320).

Matt Dillon, formerly a teenage star of the 1980s who has seen some lean years since then, throws himself into his performance. Dillon’s features have aged out and outfitted with an awkwardly gawky pair of glasses, it is a role he suits perfectly. Von Trier has clearly done some research into the psychopathic mindset. Although I am not entirely sure if a true life psychopath would have to sit in front of a mirror rehearsing expressions – when it is said they lack emotions, what people tend to mean is that they lack empathy for others or else that they suffer from the condition of alexithymia meaning that they do not recognise what their own emotions are.

Lars von Trier’s other films of genre interest as a director are:– the decayed future film noir The Element of Crime (1984); Epidemic (1987), a peculiar meta-fiction about filmmakers making a film about a plague and hypnotism; the black comedy tv mini-series’ The Kingdom (1994) and The Kingdom II (1997) set in a haunted hospital, which were both cinematically released in the West; Breaking the Waves (1996), an emotionally devastating film about a woman’s masochistic sacrifices for her husband, which eventually arrives at a fantastic climax; Antichrist (2009), a film about grief that spirals into madness and extreme torture scenes; and the End of the World film Melancholia (2011). von Trier was also Executive Producer on Kingdom Hospital (2004), the Stephen King scripted, US tv series remake of The Kingdom. von Trier’s production company Zentropa Entertainments have also produced and co-produced numerous other films. Of genre note are the Icelandic Magical Realist quest Cold Fever (1995); the Swedish fairytale The Glassblower’s Children (1998); the surreal Old Dark House thriller Impotence/Powerlessness (1998); Possessed (1999), a plague film about The Devil returning at the Millennium; Kat (2001), a horror film about a possessed cat; the Dogme film Truly Human (2001) about an imaginary man becoming real; The Last Great Wilderness (2002), a Gothic thriller set in the Scottish Highlands; Thomas Vinterberg’s near-future romance It’s All About Love (2003); In Your Hands (2004), a Dogme film about miracle healing prison inmate; the remarkable puppet fantasy Strings (2004); the ghost story Behind External Calm (2005); the dark reality-twisting Norweigian film Next Door (2005); Princess (2006), an animated film about an anti-porn vigilante; the fantasy Island of Lost Souls (2006); the horror film Echo (2007); the satirical dystopia How to Get Rid of Others (2007); Through a Glass Darkly (2008) about a girl receiving a mysterious visitation; the Dystopian film Metropia (2009); and Perfect Sense (2011) set in a world where people are losing their sensory perception.