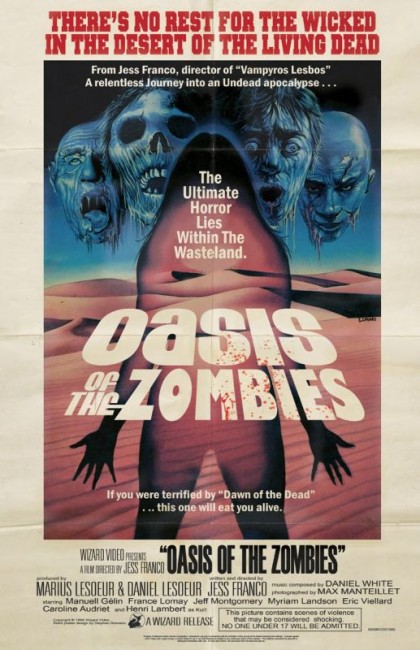 In 1943, Colonel Blabert pursued Nazi troops who were carrying six million dollars in gold into the Sahara desert. The Nazis were finally cornered and killed in a shootout at an oasis. The sole survivor of the massacre, Blabert was found by a sheik. However, when he tried to return and claim the gold, he was told that the oasis was cursed. In the present, Colonel Meitzell comes to Blabert offering a partnership to find the oasis – only to him to kill Blabert once he reveals the location. Meitzell mounts an expedition but they are slaughtered by the Nazi soldiers risen from the dead after arriving at the oasis. Blabert’s son Robert, a student in London, learns the news of his father’s death. He pieces together the location of the oasis from his father’s notes and sets out with a group of friends to find the treasure, unaware of the zombie threat awaiting.

The late Jesus or Jess Franco (1930-2013) is considered the world’s most prolific director. Between 1957 and 2012, Franco directed a purported 199 feature films. During his heyday in the late 1960s to the mid-1970s, Franco was producing easily six to eight films per year. His output covered a great many different genres from thrillers, spy films and science-fiction but most of all horror and erotica/pornography. Franco’s films have attained a certain cult following for their arty pretentions, although just as many of them are cheaply made. (A full list of Jess Franco’s other genre films is at the bottom of the page).

Oasis of the Zombies was one of the numerous continental zombie films that came out in imitation of George Romero’s Dawn of the Dead (1978). The Italian film industry in particular was very prolific in the production of these. Oasis of the Zombies was one among a mini-spate of these that dealt with Nazi zombies. The film that kicked this sub-genre off was Shock Waves (1977) and in the same year that Oasis came out we also had Night of the Zombies (1981) and Jean Rollin’s Zombies’ Lake (1981), which Franco was originally set to direct. Of these, Shock Waves is the only effort that is in any way a good film. A few years later, the Nazi zombie film was revived on substantially better budgets with Outpost (2007) and Dead Snow (2009), both of which have produced sequels, as well as War of the Dead (2011) and Bunker of the Dead (2015). (For a more detailed overview see Nazis in Fantastic Cinema).

Oasis of the Zombies is not a very good film. Even though he was entering his third decade of working in the horror film, Franco makes something that seems more like a dreary 1960s B movie rather than an imitator of Dawn of the Dead. The film’s pace is slow and meandering – much of the action is taken up between various parties wandering back and forward between locales more than it ever is at the oasis.

Even then, the zombies are dull and uninteresting figures. There are some okay rotting corpses and worm-covered makeups and one or two gut-munching scenes thrown in in an effort to satisfy the gore-drenched fad that Dawn of the Dead kicked off. However, in terms of everything we expect from a zombie film, Oasis of the Zombies is severely lacking.

One of the biggest disappointments is the whole Nazi zombie angle. All of the other Nazi zombie films mentioned above draw strongly on the images of zombies in stormtrooper helmets or SS uniforms. Here though, the zombies are simply dressed in brown fatigues so anonymous it is hard to tell even if they are military uniforms of any type.

The film is crippled by many of the cheap aspects familiar to Franco’s films. He appears to have tried to make a film set in the Sahara while going on location in the Canary Islands, resulting in a cut-price attempt to approximate Egypt – a not-too convincing bazaar where the Egyptians wear jeans and sneakers and what look like handtowels thrown over their heads in lieu of kefffiyehs.

Endemic to almost any 1970s/80s foreign-language import, there is some terrible dubbing. The film sinks into the completely ridiculous from the prologue with some of the prize dialogue with two girls discovering the oasis where we go from them enquiring about whether the trees are date palms to talking about going on dates, resulting in dialogue like “I wouldn’t mind a date,” “Bone somebody.”