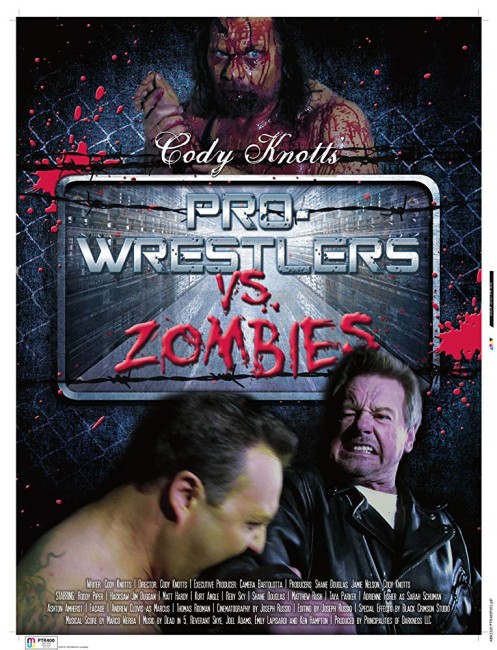 The wrestling promoter Cody Knotts receives a request from Angus to provide a group of wrestlers for a private match. The wrestlers, which include Rowdy Roddy Piper, ‘The Franchise– Shane Douglas and Hacksaw Jim Duggan, among others, travel to the disused penitentiary in West Virginia where the match is to be held. However, Angus has abducted a woman and cut out and eaten her heart in an occult ceremony, which transforms her into a zombie. She bites others and creates an army of zombies, all under Angus’s control. As the wrestlers arrive at the prison, they find it overrun by a zombie horde that starts rapidly devouring their numbers and turning them into zombies too.

True to its title promise, Pro Wrestlers vs Zombies brings together a large cast of names from wrestling, including Rowdy Roddy Piper, Shane Douglas, Hacksaw Jim Duggan, Matt Hardy, Kurt Angle, Thomas Rodman and others, including Taya Parker and woman wrestler Reby Sky, who are both nude models and girlfriends of various other wrestlers. The film is directed by Cody Knotts who also has a couple of scenes playing the sleazy promoter. Knotts had previously directed Lucifer’s Unholy Desire (2012) and Breeding Farm (2013) and went on to make the UFO film Kecksburg (2019), while writing and producing Gore Orphanage (2015) for his wife Emily Lapisardi.

Pro Wrestlers vs Zombies holds an amusement that catches your attention when you first hear about it. Alas, this fairly much begins and ends at the title. It is one of those films where it was clearly sold on a concept and where the filmmakers were stuck with what to do once they actually sat down to make it. Most of the film involves the wrestlers running around an abandoned prison being pursued by zombies. The rationale behind it all – that bad guy Ashton Amherst wants revenge and so lures his target and a bunch of others to a prison on the pretext of a private wrestling match and then conducts a Satanic ceremony to unleash zombies – is very thinly stretched. The film has been very cheaply made – and looks it.

The other problem the film has is that it casts non-actors, large and steroid-pumped men whose only real skill has been throwing each other around. In terms of acting, their forte has only been enacting larger-than-life cartoon characters designed to play to the stadium gallery. The sole exception to this is Roddy Piper who alternated wrestling with a modest acting career that took off after 80s favourites like Hell Comes to Frogtown (1987) and They Live (1988) and who carries the lead with customary ease. Indeed, he is the only of the wrestlers who reacts to the situation with commonsense (and acting ability). Most of the rest are loud, inarticulate and, in the case of Matt Hardy, seem barely able to string a sentence together. The only other one of the show who holds their own is Adrienne Fischer who plays with a practical-headed toughness that makes the other supposed pro-fighters look like the attendees at a girl’s tea party.