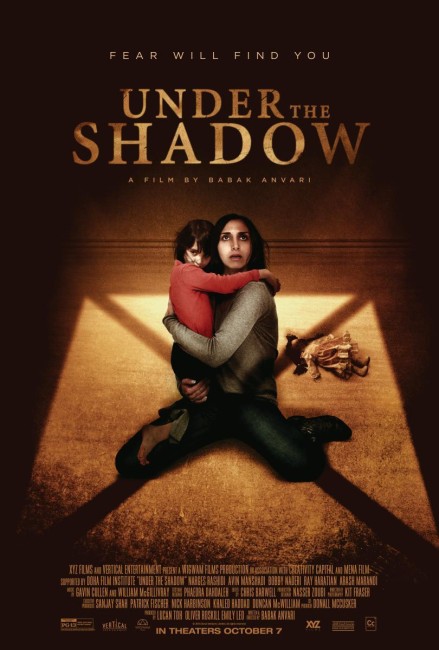 Iran in the early 1980s a few years after the Cultural Revolution and in the midst of the bitter war with Iraq. In Tehran, Shideh is married to Iraj and they have a young daughter Dorsa. Shideh is frustrated after being turned down by the authorities in her request to return to her studies to be a doctor because of her association with a leftist student group during the revolution. She resents the new authority – laws that requires her to have her head covered in public, that the VCR they have in their home is now illegal. The city is under constant attack by Iraqi missiles meaning they must frequently seek shelter in the basement of the apartment building. Iraj is then drafted to work as a doctor in the war zone. He urges them to leave the city but Shideh is unwilling. After a bomb falls through the roof of the building, Shideh begins to see phantom shapes. Other residents insist these are djinn. Shideh dismisses their superstitions but the appearances become more nightmarish. It then appears that the djinn, who always steal a personal item of those they target, may have taken Dorsa’s favourite doll.

When I was reviewing Tobe Hooper’s Djinn (2013), I became fascinated with finding whether there had been any other horror movies made in the Islamic world. The upshot appeared to be that there have been very occasional examples but that the genre never seems to have taken off in the same way that a fascination with zombies, vampires and chainsaw-wielding maniacs runs through Western cinema. There may well be some examples that hide in lack of English translation or have yet to come to light from countries that are less open to the West. The only other one that I had reviewed here was Jamal Dehlavi’s incomprehensible Born in Fire (1986), although that was made by Islamic people living in Britain.

Whatever the reasons might be, the last couple of years prior to this saw a sudden upsurge of interest in the Islamic horror film. Iranian expatriate Ana Lily Amirpour made the unique A Girl Walks Home Alone at Night (2014) with its unforgettable image of the vampire girl skateboarding through the street as her long black chador flaps behind her, and the subsequent The Night (2020). While not specifically Islamic in its themes, Can Evrenol’s gore-drenched Baskin (2015) came out of the very Islamic Turkey. And now we have Under the Shadow from Iranian director Babak Anvari. That said, A Girl Walks Home Alone at Night, Under the Shadow and The Night are made by Iranian expatriates and shot outside of their countries (A Girl Walks Home and and The Night were made in California, while Under the Shadow was made in Jordan) rather than by people within their homeland, which makes the case slightly different (although equally provides far greater freedom for the filmmakers’ to deal with themes that might otherwise be censored).

Under the Shadow is everything that Djinn wanted to be but wasn’t. Djinn was just Tobe Hooper rehashing a cliche Western horror film plot with a few Islamic settings. By contrast, Under the Shadow takes a very similar plot and tells it in a culturally authentic way that never would have occurred to Tobe Hooper because that wasn’t the background that he came from.

Under the Shadow is essentially an Islamic version of The Babadook (2014). Narges Rashidi is a Tehran wife who suddenly found herself displaced in her own society after the Cultural Revolution of 1980. She resents wearing the hijab and in the midst of the increasingly frantic situation frequently runs out of the apartment forgetting to put one on, later being arrested for fleeing onto the streets with her head unclad. In one of the more amusing scenes, she exercises to Jane Fonda workout tapes but has to hide the fact that they have a VCR in the house, as possessing one is illegal under the new regime.

The film opens with her pleading with an official to be allowed to return to her studies to become a doctor only to be rejected because of associations with a student political group during the revolution (we never find out if her affiliation was genuine or it was just youthful naivete and wrongly chosen friends as she claims). Against all of this, she is portrayed as a modern Western-leaning woman who automatically rejects it as nonsense and superstition when her more traditional neighbours start claiming that there are djinn in the building.

The entire arc of the film is about her unravelling from a modern Westernised woman to becoming haunted by the superstitions of the society around her. Indeed, much of what she experiences throughout seems to act as punishment for her refusal to accept the traditional, submissive role that is expected of her in the new society – she is arrested for lack of head scarf, banned from her studies for having the wrong friends at university, the entity tears up her Jane Fonda workout tape and steals her precious medical encyclopaedia. In a possibly ghostly trick, even her husband’s voice comes down the phone calling her a bad mother.

I am not entirely sure what Babak Anvari’s message was here – I find it hard to fathom that this is a film that holds a hardline approach and reads as it does on the surface about the forces of religion punishing a woman for her liberal ideas. The more likely theme is that the film is intended as an allegory for Iran’s descent from Westernised free society to a fear-filled totalitarian theocracy. I left not entirely sure of what the message I was meant to take away from the film.

That said, Under the Shadow works well as a horror film. You can make a good deal of comparison to The Babadook. Under the Shadow is a less atmosphere driven film and works in more psychological ways. It is a film that is more about Narges Rashidi’s psychological fracturing from a woman of reason to a state of fear and superstition.

One of the most effective scenes is not any haunted one but simply where Narges is driven to tearing the entire apartment apart in the increasingly frantic search for her daughter’s doll. It is not a film without its ability to deliver more than a few jumps too with Babak Anvari doing a great job in producing unearthly images of a spectral woman with no face in a black-and-white patterned burka, or Narges’s husband turning up in bed and figures bursting through the ceiling.

Director Babak Anvari next went on to make the US horror film Wounds (2019), as well as to produce the horror anthology series Monsterland (2020- ).

(Nominee for Best Original Screenplay at this site’s Best of 2016 Awards).