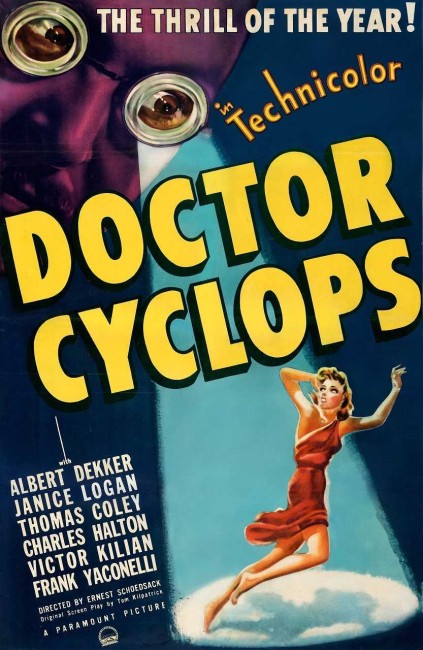 A group of scientists are summoned by Dr Alexander Thorkel to his laboratory in the Peruvian jungle. When they arrive they find that Thorkel has brought them all the way there only to identify crystals under his microscope because his own eyesight is too poor for him to see them himself. Insulted, they set up camp in Thorkel’s stockade deciding to stay until he tells them more about the experiments he is engaged in. When he finds them snooping in his laboratory, he angrily locks them inside his atomic generator. When they emerge, they find they have been shrunken to twelve inches tall. At that size they are now at the mercy of both the predators of the jungle and Thorkel’s cruelty.

Dr Cyclops is one of the best mad scientist films of the 1940s. It was directed and produced by no less than Ernest B. Schoedsak and Merian C. Cooper, who only a few years earlier had made the all-time classic monster movie King Kong (1933). When the majority of the mad scientist films of the 1940s became typified by the likes of The Devil Bat (1940), Dr Cyclops is one that stands heads and shoulders above all the others, even if for the simple fact that it, unlike all the others, it was made in colour.

Although the film has had an edge taken off it by today’s routinely miraculous flights of CGI generated banality, it was a tour-de-force of special effects for the time it was made. The combination of matte work, split-screen and scaled-down sets is flawless. Schoedsak sets up some superb shots – like the shot where Albert Dekker holds a squirming Charles Halton up before his looming face in his fingers; or a single-shot encapsulating Dekker’s shooting of Frank Yaconelli as he scales a rock, even down to the tiny splash as the body hits the water.

The detail is amazing – like the way the miniaturised horse struggles in the net as it is taken away. The effect of the size difference is further enhanced by shooting the small people only in wide-angle, never in closeup, and almost always looking down on them. (The only problem here being that this tends to make them into an aggregate group and they never achieve individual characterisations).

Before the particular theme was overtaken by the stark metaphoric power of The Incredible Shrinking Man (1957) or the unalloyed fun and wonderment of Honey, I Shrunk the Kids (1989), Dr Cyclops was one of the best miniaturised people survivalist stories.

Albert Dekker, one actor whose personal life makes for bizarrely interesting reading, played sinister and villainous characters in a number of films during this decade. His Dr Thorkel is an interestingly shaded mad scientist, much better characterised than most of his contemporaries. He is never actually referred to Dr Cyclops – the title is an allusion to the Greek myth of the one-eyed giant monster The Cyclops. In the myth, The Cyclops made prisoners out of travelers who escaped by blinding its single eye, something the miniaturised prisoners here eventually do by breaking Dekker’s Coke bottle glasses.

Merian C. Cooper and Ernest B. Schoedsak made several other genre films together that include the excellent human hunting film The Most Dangerous Game (1932), The Monkey’s Paw (1932) and King Kong (1933). Merian C. Cooper also produced the H. Rider Haggard lost world adaptation She (1935).