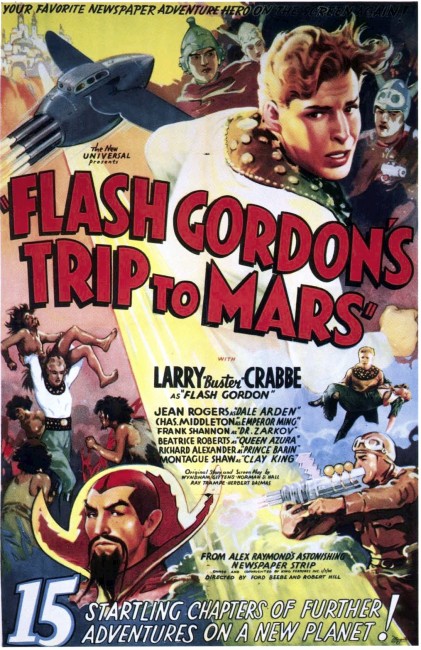 Earth is being affected by nitron rays, which cause havoc with the weather. Dr Zarkov determines that the source of the nitron rays is Mongo. He, Flash Gordon and Dale Arden, along with stowaway reporter Happy Hapgood, set forth aboard Zarkov’s rocketship. Once there they find that the rays are coming from Mars, not Mongo and change course. On Mars, they discover that their old enemy Ming the Merciless is collaborating with the Martian witch queen Azura. Joining with Prince Barin and the Clay People, they set out to stop Ming and Azura.

Flash Gordon’s Trip to Mars was made in 1938, just after Orson Welles’s famous War of the Worlds (1938) radio broadcast. Clearly hoping to cash in on the Mars hysteria, the film changes the comic-strip’s usual venue of Mongo to Mars – and from the looks of it after shooting had begun too, having Zarkov and co initially set out to Mongo but in mid-journey suddenly discover the nitron beam is originating from Mars and make a course correction.

The sequel is just as good if not in many ways even superior to the first film. It has many of the problems that perpetually dogged the serials – the photography is primitive and the shots rarely ever move into closeup (the legacy of the notoriously quick shot set-ups of serial directors).

Some of the acting is less than adequate. As Dr Zarkov, Frank Shannon plays with a peculiarly unsettling intensity – the man would have been perfect to play the role of Rasputin. Beatrice Roberts makes an incredibly dowdy Queen Azura – she suggests none of the sinister and alluring beauty that the character did in Alex Raymond’s strip, in fact seems more like a 1930s housewife dressed up in exotic costumery than a convincing witch queen.

There is also an irritating comic relief character in Donald Kerr’s whiny-voiced reporter. The best performance comes from Charles Middleton who plays Ming with a spidery crepuscular intensity that is decidedly spooky. Larry ‘Buster’ Crabbe, his hair dyed black this time, plays with typical humourless intensity and unquestioning stalwart heroism.

Nevertheless, there is a way-out excitement to the film that transcends the shabbiness of the surroundings. The primitiveness gains its own charm, particularly when it comes to the effects. The scenes of the rockets farting trails of smoke as they make their way through space and the joyous pre-Star Wars (1977) battles of Martian airships hold a wonderful excitement even at the same time as one can recognise the primitiveness of the effects.

The sights on display – bridges made out of light that stretch between buildings, trains that traverse tunnels between Martian kingdoms, the wonderful costumes, the beautiful rococo mediaeval architectural fantasy world – are splendid. The beauty of the film is that it manages to outshine its extremely primitive background and create a world of pure wonder. One other plus, showing the care and commitment that has been put into the serial, is that it actually has a script as opposed to something that connects together or merely sets-up action cliffhangers.