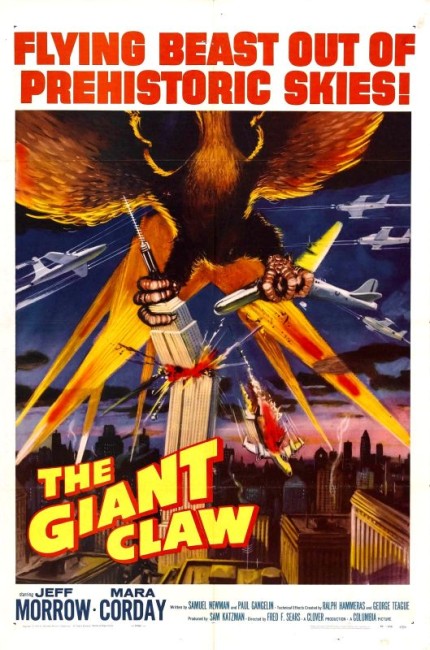 Engineer Mitch McAfee is conducting a test flight of radar equipment for the Air Force in Alaska when he reports that his plane has been passed by something as big as a flying battleship. This is disbelieved back at base but he persists with his claim. Soon after, he is proven right as air traffic is attacked amid further reports of a giant flying bird. The Air Force attempts to shoot the bird down but it proves impervious to any type of attack. Scientists then realise that it is an alien creature made of antimatter, which is causing it to be invisible to radar and capable of projecting a shield to protect itself from any attack.

The Giant Claw was a 1950s monster movie. After the successes of the seminal atomic monster films The Beast from 20,000 Fathoms (1953) and Them! (1954), the floodgates were opened to a deluge of revived dinosaur and giant animals on the attack films. The Giant Claw was one of the few of these in which atomic radiation was not used as an explain-all raison d’etre.

The Giant Claw came from Sam Katzman who had gained a reputation as a low-budget producer in the 1940s, churning out a more than reasonable number of B Westerns and serials, including several East Side Kids comedies and a number of B mad scientist films featuring Bela Lugosi, as well as the serial version of Superman (1948). One of Katzman’s better-budgeted films was the Ray Harryhausen alien invasion film Earth Vs the Flying Saucers (1956) upon which Fred F. Sears had been the director. Katzman and Sears worked together as director and producer on twenty-six other films, including the comic-book adaptation/serial Blackhawk (1952), the bizarre atomic werewolf film The Werewolf (1956) and The Night the World Exploded (1957), not to mention the classic rock’n’roll film Rock Around the Clock (1956) among others.

Here Fred F. Sears has clearly been directed to do what he successfully did on Earth vs the Flying Saucers – only more cheaply. The film makes a virtue of the same adept merging of live-action with stock footage of planes and military craft in action that Sears did well on Earth Vs.

The leads are played by Jeff Morrow, a regular at these type of films who also appeared in This Island Earth (1955), The Creature Walks Among Us (1956) and Kronos (1957), and Mara Corday, from the other giant monster movies Tarantula (1955) and The Black Scorpion (1957). The two of them hit up an appealingly flirtatious relationship. Elsewhere, Morris Ankrum, who played a military commander in numerous films of the era, is reliably cast to type.

Crucially, what The Giant Claw lacks is anybody akin to a Ray Harryhausen. It works as a standard 1950s B monster movie, however there comes the point where the entire film collapses in on itself. That point is the one where we get to see the title creature, which may well count as one of the most pathetic and ridiculous monsters to ever appear on screen in the entire history of the giant monster movie. What we get looks like a scrawny buzzard held up on wires (which are at least not too obvious) with a head on a long corrugated neck and absurd-looking cartoon eyes. There are some laughable effects with it biting into pitifully obvious model planes and trains.

The creature is given the novel scientific explanation of being a creature from outer space composed of antimatter – something that is said to make it radar invisible and able to project a forcefield that causes bullets to bounce off it. While lip service is paid to the fact that normal matter and antimatter would mutually annihilate one another in a massive explosion if they touched, the film then contradicts this by having the antimatter-composed bird biting into regular planes, trains and devouring parachutists.