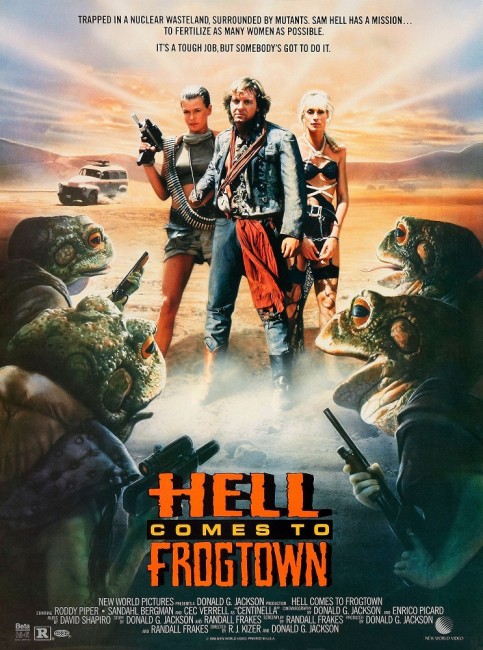 It is ten years after the world has been destroyed by nuclear war. Sam Hellmond is appropriated by the MedTech militia because he is one of the few men who have not been rendered impotent by the holocaust. After signing their contract, Sam finds that he is now MedTech’s exclusive property, having been placed in an electronic chastity belt that will blow up if he tries to remove it. He is sent on a mission in the charge of the coldly detached Nurse Spangle to Frogtown in the Mutant Reservation to rescue a group of fertile women that have been captured by mutant frogs.

Hell Comes to Frogtown takes a plot that, played straight, would have brought howling accusations of sexism and plays it with tongue firmly planted in cheek. It sends its own genre up amusingly – the opening shot playfully opens on the ruins of the Statue of Liberty in a parody of Planet of the Apes (1968), which then pulls back to reveal it is only a plastic model amid the post-holocaust rubble. The film has a clear eye for the absurdities of its own plot without fully rupturing the envelope of credibility – it gets an enormous amount of mileage out of the gags concerning Roddy Piper’s electronic chastity belt.

Roddy Piper, then billed as Rowdy Roddy Piper, was one of the rawest, most entertainingly sensation-seeking of the Superstars of Wrestling wrestlers. Here he makes a competent acting debut – something he would polish further in the subsequent They Live (1988) – despite a voice that sounds like a buzzsaw. He is well paired up against Sandahl Bergman who has the most entertaining role she has ever had – all coldly clipped detachment behind glasses and hair in a primly bound bun. Some of Hell Comes to Frogtown‘s funniest moments are theirs together – she stripping to her underwear to arouse him, announcing “I’ve been trained in seduction techniques,” or the scene where she sits him over the sleeping escapee and abruptly commands him to have sex with her: “She’s ovulating and you’ve got a high count. Let’s go.”

Hell Comes to Frogtown has been made very much on the cheap. The titular Frogtown, for example, is merely a series of corrugated tin sheds and a few exteriors of a factory complex. The film does take recognition of its own limitations and wears its stripes with considerable pride – the rescue ambulance, for example, is a Morris Minor van that has simply been painted pink.

On the whole, Hell Comes to Frogtown does a remarkably good job, despite budgetary shortcomings, in the competency of its effects, its musical score, in some good action directing and editing and in the reasonably convincing frog makeups. The credits appropriately dedicate the film to four of the great serial directors – Frederick Stephani, Ford Beebe, Ray Taylor and Robert Hill.