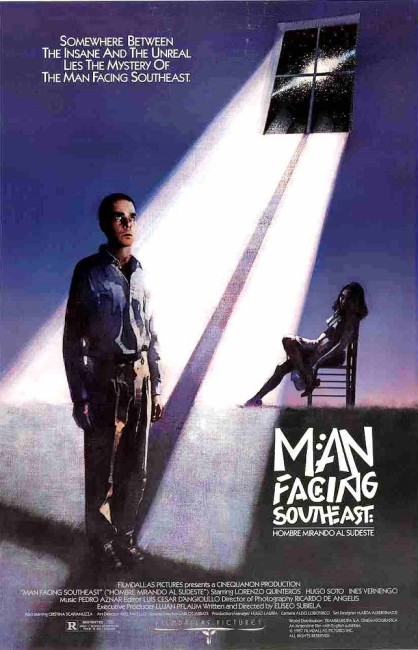 Psychiatrist Julio Denis discovers there is one extra patient in the asylum where he works. The patient in question, Rantes, insists that he is a projection, human in all ways except for his lack of feelings and that he has been sent from another planet to study humanity and help the poor in spirit. As Denis tries to discover who Rantes is and why he, when otherwise perfectly normal, persists with his fantasy, Rantes’ quiet ironies about the human condition and unusual charisma comes to change him and the other patients. However, Denis comes under increasing pressure from his superiors to place Rantes under the influence of psychiatric medication.

If one can imagine a conceptual collision between Jesus of Nazareth (1977), Starman (1984) and One Flew Over the Cuckoo’s Nest (1975), one might come close to having some idea of how to describe this strange and haunting Argentinean science-fiction film. It is a Christ allegory that has been retooled for the 20th Century with spaceships and psychiatry, with the mentally ill for the poor in spirit, a psychiatrist cast as Pontius Pilate and the imposition of psychoactive drugs in place of a crucifixion.

Man Facing Southeast a beautifully literate fable. The patient rationality of Rantes, the calm insistence of his ideas, is extraordinarily touching. The quiet, crystal clear reflections on humanity the film makes with its virtually blank character, attain a literacy that science-fiction cinema rarely reaches. The interplays of dialogue are superb – there is a beautiful conversation where Rantes tells how others of his kind have been seduced by small things – the smell of perfume, the sound of a saxophone – and how Denis jokingly offers to bring his saxophone, whereupon Rantes asks in perfect deadpan that Denis not to tempt him. The images – of Rantes moving through the ward, the patients reaching out to touch him and the final haunting vision of all the patients standing in a circle waiting for the spaceship to return – are arresting. There is one cinematically magical scene where Rantes takes the conductor’s baton at an open-air orchestra to conduct the onlookers to dance to Beethoven’s Ode to Joy.

If Man Facing Southeast has any problem, it is that it remains undecided between the ambiguities of Rantes’ origin that it sets up. This is deliberate, but Rantes’ displays of telekinesis and the blue fluid Beatriz dribbles definitely land the film in the otherworldly, yet contradictorily the film definitely roots both Rantes and Beatriz as having a human past. The existential doubt should be one that exists through the eyes of Denis but the film wants to confirm Rantes truth and then deny it for us too as well, which seems like overstatement.

Man Facing Southeast follows what was established by Steven Spielberg’s Close Encounters of the Third Kind (1977) and E.T. – The Extra-Terrestrial (1982) and numerous imitators, including the aforementioned Starman, which saw encounters with aliens in terms of a child-like surrender to religious awe. At oppose to this, Man Facing Southeast and one or two other films of the era, such as Andrei Tarkovsky’s Stalker (1979), Friendship’s Death (1987) and Contact (1997), even the entirely terrible Deceit (1989), were much more ambiguous about the experience of contact.

These were films that hovered in an interesting neutral existential ground of having to make a leap of faith to believe in the alien but also trying to hold onto a patent rationalism that dictated that there was a purely mundane explanation. They were a body of films that moved away from the child-like wish for transcendental experience that Spielberg pined for and coveted a more reasoning adult acceptance. Also of interest here is Martian Child (2007) about the adoption of a child who ambiguously claims to be alien, yet at the end goes the other way and repudiates the doubts for a mundane explanation.

In the USA, Man Facing Southeast is only available in a badly dubbed version; the subtitled international print treats this beautiful film with far more justice. The film was blandly and uncreditedly remade as K-PAX (2001).

Argentinean director Eliseo Subiela went on to make a number of other films up until his death in 2016, all of which contain surrealist elements, including Last Images of the Shipwreck (1989), Don’t Die Without Telling Me Where You’re Going (1995), The Adventures of God (2000), Don’t Look Down (2008) and Hostage of an Illusion (2012).