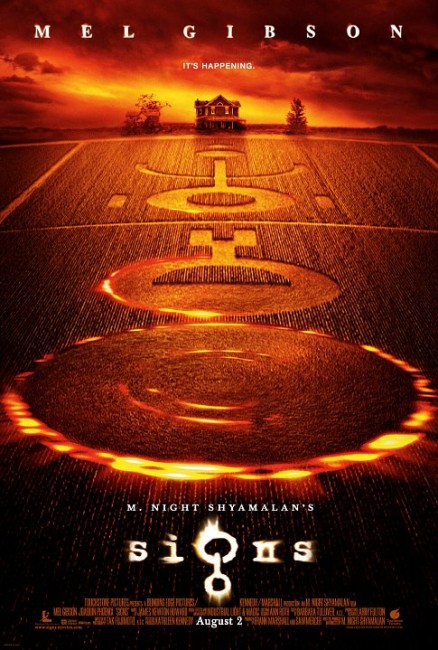 Graham Hess is a former priest who has lost his faith following the death of his wife in an accident. He lives on a farm in Bucks County, Pennsylvania with his two children and brother Merrill. He is startled to one day discover crop circle patterns in his field. Suspecting pranksters, he and Merrill try to catch those responsible. However, as crop circles appear all over the world and then UFOs in the skies, they come to realise that the circles are extraterrestrial in origin. Fear and uncertainty spreads everywhere. As Graham and others start to catch glimpses of the chameleon-like creatures responsible, they begin to understand that this is an alien invasion.

The surprise of M. Night Shyamalan’s success is that, while it seems that every other genre film being made at the moment is obsessed with crafting the epically spectacular and leaving audiences dizzy with CGI effects wonderment, his films gain their strength from their ordinariness. Compare Unbreakable and its ordinary, unremarkable superhero with the superheroic exploits of say X-Men (2000) or Spider-Man (2002), or Signs with the alien invasion spectacle of Independence Day (1996). Shyamalan’s films by contrast are quiet, intimate, almost kitchen sink films that rigorously eschew any outward spectacle in favour of charting the inner moral journeys of their protagonists.

Here Shyamalan does employ Industrial Light and Magic, the top visual effects company in the world, on Signs, but to the contrary they are given amazingly little to do. Rather, Signs derives its effect from not showing the aliens – all that ILM’s effects seem to consist of is a handful of lights in the sky seen on a tv screen, the sort of effect it is possible to create with a camcorder and a flashlight. Right up until the end, we only see the briefest glimpses of anything alien, so brief that if you blink you would miss them. In this respect, Signs could almost be one of the psychological horror films produced by Val Lewton during the 1940s – Cat People (1942), I Walked with a Zombie (1943) et al – which derived their effect from their ambiguity in regard to the supernatural – no monsters were ever seen and we were left in a state of suspension as to whether things happening were real or only being imagined by the characters in the film.

M. Night Shyamalan is a one-man band – he not only writes, directs and produces Signs but also plays a supporting role (he can be seen as the grief-stricken farmer who killed Mel Gibson’s wife). Shyamalan is a director/writer about which one sits in two camps. There are some things he does extraordinarily well – obtaining a quietly hushed and bared-open intimacy out of his characters, of crafting strong relationships between adults and children, and writing often haunting dialogue – while at other times his conceptual reach grasps at more than he can digest or topples into risibility.

The Sixth Sense was an occasion when everything Shyamalan did worked beautifully and when he opened the film up and pulled the carpet away from under our feet, it resulted in a breathtaking ‘ahhh’ and left audiences going out buzzing about the reversal he had pulled. Subsequently, Unbreakable, Signs and The Village seemed to be straining to make audiences go ‘wow’ in the same way. In all cases, they seem irritatingly opaque films.

Shymalan is an inveterate game player – his films are ones where he seems to delight in engaging his audiences in an unveiling conceptual puzzle. Unbreakable, Signs and The Village have the irritating habit of seeming to build toward great breakthroughs that, when eventually unveiled, only contain wimpy revelations, certainly not the stunning conceptual reversal of expectation that The Sixth Sense offered and that both Shyamalan and the publicity people want to lead us to expect he is offering again. Unbreakable‘s entire promotional campaign, for example, tried to build a big conceptual breakthrough surprise up about the film, which fizzled upon the revelation of the silly notion that it was about comic-book superheroes. Most audiences laughed the ending of The Village off the screen.

Signs has exactly the same problem. The promotional poster consisted only of a crop circle pointing toward a farmhouse and the legend “From the director of The Sixth Sense,” with the name of Mel Gibson not even mentioned on some posters. Like Unbreakable, Signs‘s only big major surprise is what it is about. In fact, when one takes Shyamalan’s conceptual unveiling games away, Signs offers only an ordinary and at times even risible alien invasion film.

M. Night Shyamalan can be capable of great writing but by this point the flash and brilliance that The Sixth Sense held is starting to seem like an increasing woolly-headedness. The idea of a film tackling the phenomenon of crop circles is a unique one – not even tv’s The X Files (1993-2002, 2016-8) with its weekly cornucopia of all things weird and wonderful from the world of the paranormal ever ventured to tackle the crop circle phenomenon.

However, while crop circles are the hook, Shyamalan loses interest in the idea after the initial set up. Signs never even offers any particular explanation of what the crop circles are – bar some talk of the alien’s using them to navigate (and when you consider that the aliens are capable of camouflage and invisibility shields, this seems a ridiculously primitive idea technologically – it is surely the equivalent of saying that we should light huge bonfires outside airports in order for pilots to see to land). And the way that the aliens are finally dispatched is only trite – it worked against the Wicked Witch of the West in The Wizard of Oz (1939), but by the time it was employed in The Day of the Triffids (1962) it was starting to seem corny in its convenience, and repeated here is a clunker.

Surprisingly, Shyamalan also contrasts his alien invasion story with a parable about a man coming to rediscover his religious faith. Most of Shyamalan’s films have an underlying theme of people coming to understand their true nature and/or discovering that the world has an underlying or predestined purpose. There is some striking writing in the speech where Mel Gibson explains to Joaquin Phoenix the difference between those who see the world in terms of miraculous signs and those who do not, and an especially good dinnertable scene where Mel adamantly refuses his children’s wish to say a prayer. The character arc is well written, even if Mel Gibson, although determined to put as much acting as he can into the part, fails to believably portray a burned-out priest.

Alas, Shyamalan flubs the payoff. He wants to convince us that there is no such thing as coincidence, that all things fall into being part of a divine purpose. However, the end of the film where every tiny detail – the daughter’s obsession with water, the son’s asthma, Joaquin Phoenix’s Minor League score, Mel’s wife’s death – all falls into meaningful place, smacks less of any sense of an amazing sense of religious purpose unveiled than it does of authorial sleight-of-hand. That is to say – all it is is a hokey ending where Shyamalan has set up several seemingly random occurrences, only to then improbably pull them together and try to convince us it is a big philosophical insight into divine purpose. (The theme of an alien invasion dealt with by predestined purpose has a surprising number of similarities to the somewhat more coherent Stephen King adaptation Dreamcatcher (2003), which came out only seven months later).