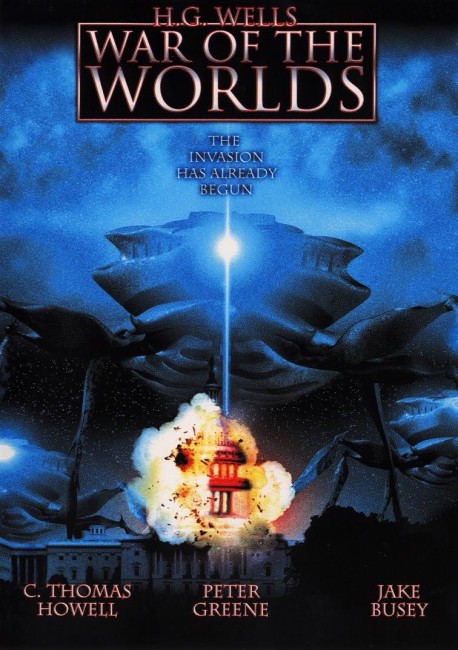 Astronomer George Herbert is about to leave for Washington D.C. with his wife Felicity and son Alex to celebrate his wedding anniversary when he and Alex observe meteorites coming down through their backyard telescope. George is called in to work and has to abandon his plans. He stops by the nearby site of one of the impact craters and discovers that a cylinder has landed. Vast six-legged machines emerge out of the cylinder and start incinerating all people and buildings in the near vicinity with raybeams. As the world comes under attack and society is devastated by the alien war machines, George struggles across country to rejoin Felicity and Alex at the Lincoln Memorial.

This version of the H.G. Wells novel The War of the Worlds (1898) is essentially where the legend of the low-budget production company The Asylum began. The Asylum had been in business since the 1990s where they had made a steady output of mostly low-budget horror films – titles include the likes of Scarecrow (2002), King of the Ants (2003), Alien Abduction (2005), Dead Men Walking (2005), Legion of the Dead (2005) and Way of the Vampire (2005).

With the announcement of Steven Spielberg’s remake of War of the Worlds (2005), The Asylum had an ingenious idea. Realising that the original H.G. Wells novel was in public domain, they quickly mounted their own low-budget production and released it to video shelves one day before the Spielberg film hit theatres. Two weeks earlier, Timothy Hines also released his own long-planned version The War of the Worlds (2005), which, unlike the other two films, was set in the novel’s original Victorian period and set out to tell the H.G. Wells novel as it was originally written. 2019 saw a further resurgence of interest with The War of the Worlds (2019), a three-part BBC tv mini-series set during the Victorian period; and War of the Worlds (2019), an eight episode mini-series that relocates action to the contemporary European Union.

It is not known to what extent The Asylum were privy to the details of Spielberg’s War of the Worlds – one assumes they had no more than general press release material available to them – but their version has a surprising number of similarities to the Spielberg version. Like Spielberg, The Asylum transplant and update the H.G. Wells novel from England in the Victorian era to contemporary USA. Similarly, Wells’s unnamed narrator is made into a modern family man whose principal drive throughout the story is to cross the country to reunite with his family. Like the Spielberg film, The Asylum’s version also acknowledges the modern astrophysical reality of Mars being unable to support life and, while it does include meteorites coming down at the start, it, like Spielberg, simply removes any mention of Mars as being the source of these. At one point, the screenplay does venture into an interestingly existential take on things with a storeowner suggesting all manner of explanations – alien invasion, military experiments and the 00s buzzword that also underscored the Spielberg film, the idea of it being a terrorist attack.

In other areas, The Asylum’s film actually adheres closer to the H.G. Wells novel than the Steven Spielberg version did – C. Thomas Howell’s hero does encounter the equivalent of the book’s companions of the artilleryman and the curate, whereas Spielberg condensed both of these down into the single character of Tim Robbins’ cellar dweller and removed any religious references. During the early sections, the artilleryman becomes C. Thomas Howell’s travelling companion in the person of Andy Lauer’s displaced soldier who has a more substantial and honourable role than he did in the book. H.G. Wells had the artilleryman return at the end where the bulk of his scenes came as he outlined a grand but ineffectually idealistic plan to create an underground resistance. The film retains this but displaces this aspect of the character onto a militant general played by a badly overacting Jake Busey (billed as William Busey).

The character of the curate has been updated to the far more American idea of a pastor in the person of Australian actor (and Asylum regular) Rhett Giles. For H.G. Wells, the character of the curate embodied his contempt for religion, although in the initial scenes here Rhett Giles’s performance is more handsome and assured than the craven and cowardly characterisation that Wells wrote. In fact, the characterisation of the pastor/curate becomes one of the best parts about The Asylum’s War of the Worlds – there is an excellent piece of writing where Giles offers succour to a woman (Kim Little) and she turns on him in anger at the inadequacy of his platitudes about being reunited with her dead children in the afterlife and we see the pastor’s faith visible crumbling.

Particularly good are the scenes in the cellar where we see the pastor going to pieces, becoming racked with fear, ranting about demons and obsessively eating everything, which is almost exactly as H.G. Wells wrote the character. The only part we do not get is the scene where the hero batters the pastor’s head in, leaving him to be dragged away and devoured by the Martians, whereas here it is the invading probe that kills the pastor. This is the only of the modernised versions of the H.G. Wells novel that actually does this character justice.

There are also a number of substantial differences between The Asylum film and the H.G. Wells novel. One of the most notable differences is that The Asylum have chosen to cut Wells’ tripod Martians – something that has become an indisputably iconic image associated with the novel (although equally something that film versions have had difficulty with – the earlier George Pal version The War of the Worlds (1953), for instance, replaced them with flying machines because of the technical difficulty of animating tripods). Here for some reason we get six-legged war machines – one would have thought that three-legged ones would have been much less complex to provide in terms of digital effects.

The war machines are also equipped with a variety of weapons, including a green poison gas and smaller mechanical spiders, which have no equivalent in the story. The biggest change is the nature of the ending – in every other version of the story, the Martians are killed because they have no natural immunity to Earth bacteria. The script here changes this and has C. Thomas Howell infect the invaders by injecting one of them with a vial of rabies that he picks up from a veterinary clinic, which somehow manages to spread to infect every alien on the planet within a couple of days despite rabies only being a blood-transmitted disease.

Being made one of The Asylum’s economy budgets, War of the Worlds does suffer when it comes to one of the essential aspects of the H.G. Wells novel and especially almost any film version – the depiction of the mass destruction. Indeed, this is almost the sole raison d’etre of any film version of the story. During the early scenes, we get some so-so effects of the war machines on the march, the heat ray blasting people to the skeleton and so on but very little shown in the way of large-scale mass destruction. There is a passable stab in the direction of non-effects driven spectacle, showing human carnage and bodies lying everywhere.

Some of the dramas in the early sections also end up being a little underwhelming – like the scene where C. Thomas Howell tries to rescue a teenager (Ed Deruiter) who has fallen down into the pit, which becomes less a rescue than Howell calling out “climb, come towards my voice,” or else the big drama where Howell and Andy Lauer struggle to overturn … a prefabricated garden shed about the size of an outhouse so they can seek shelter inside. Occasionally though, there are some impressive effects scenes – in particular, a shot where C. Thomas Howell and Rhett Giles walk along a riverbank and we see an overturned luxury liner lying on the other shore.

The result works better than most of The Asylum’s films due to a reasonable script that both pays respect to and takes licence with H.G. Wells in some interesting ways. The effects sequences are slightly better than those that turn up in most other films from The Asylum. The result makes for a film that emerges as halfway watchable and holds unexpected worth among the dross the company usually turns out.

The Asylum also produced a sequel War of the Worlds 2: The Next Wave (2008), which featured a return performance from C. Thomas Howell who this time also directed the film.