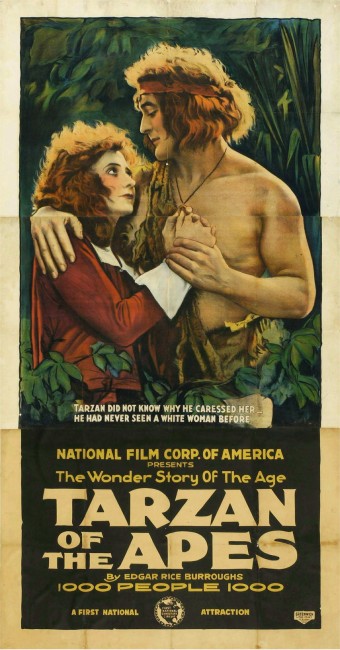 In 1886, Lord Greystoke, John Clayton, and his wife Alice, along with their infant son, are sent to Africa on behalf of the British Empire to quell an uprising of Arab slavers. On the way there, they face a mutiny on board the ship and are abandoned ashore on the African coast. They struggle to raise the baby in a treehut but Alice dies and Clayton is killed in an animal attack not long after. The young child is then found by the mother ape Kala and taken as surrogate for her own dead baby. Named Tarzan, the child grows up among the apes, believing it is one of them until he discovers his own reflection in a pool of water and realises the difference. Tarzan then discovers the treehut, teaches himself how to read with a child’s primer and uses a knife to gain supremacy among the apes. He is found by Binns, a sailor who aided the Claytons aboard the ship but was captured by the Arab slavers. Binns teaches Tarzan to read and then heads to England to tell the Greystokes that their heir has survived. They return with an expedition. Among the group is Jane Porter and her father. After he snatches Jane away from animal attack, Tarzan is captivated by her and the two discover an attraction for one another.

This was the very first screen version of Edgar Rice Burroughs’ enduring classic Tarzan of the Apes (1912). Little did people know at the time what the Tarzan legacy would grow into on cinema screens, producing some 150 films and around ten tv series. The 1918 Tarzan of the Apes was the very first of these. As such, it is a version of the story that comes fresh and unshaped by the cliches that set in following the Johnny Weissmuller films in the 1930s and 40s – the cosy parody of family life in the treehut with Tarzan, Jane and Boy, the comic relief scenes fooling around with Cheeta, and the tiresomely interchangeable elephant’s graveyard, lost city, marauding native tribes and treacherous Western explorer plots that were required to drive the films.

Edgar Rice Burroughs was directly influential on the production. Burroughs was interested in producing a version of the film himself but the idea was rejected by the studios. Burroughs then sold the rights to the book to insurance salesman turned actor William Parsons who formed the National Film Corporation of America to produce the film. Shooting took place in Louisiana with the bayous standing in for the African jungle.

The role of Tarzan was initially cast with Winslow Wilson, however Wilson walked off the set soon into the production to enlist in World War I and the role was then recast with D.W. Griffith bit player Elmo Lincoln. (Some footage of Wilson does survive in the finished film in the vine-swinging scenes due to the fact that Elmo Lincoln had difficulty with heights). Edgar Rice Burroughs, even though he retained five percent interest in the company, parted ways with Parsons over the casting of Elmo Lincoln. Burroughs conceived of Tarzan as someone gracefully athletic and regarded Lincoln as brutish. Parsons won out by reminding Burroughs that he had ceded control over the production by selling the book’s rights.

Tarzan of the Apes 1918 comes closer to the plot of Edgar Rice Burroughs’ book than any other Tarzan film. The film adheres to the text and adapts closely from the book on most points. Unlike any of the films that followed up until Greystoke: The Lord of Tarzan, Lord of the Apes (1984), this film begins with the introduction of the Greystokes, their journey to Africa and being abandoned on the coast of Africa after a ship’s mutiny, their deaths, the introduction of Kala and her adoption of the infant Tarzan as her own child after her son dies. The story is extremely accurate to the sections of the book with the young Tarzan growing up, discovering the hut, finding the knife, realising who he is after seeing his reflection in a pool of water, finding the child’s primer, the skeletons lying in the hut, the baby’s skull left.

There are also details that none of the other films incorporate such as the maid Esmeralda and Tarzan’s terrorising of the native tribe who fearfully regard him in awe (the latter two get removed today because they venture into some dubious racial portrayals). One of the additions to the story is the character of the sailor Binns who is abandoned along with the Claytons and taken in by Arab slavers. Binns largely performs the role of the explorer D’Arnot who teaches Tarzan to speak English in the book. The film also cuts the final chapters of the book where Tarzan follows Jane back to Baltimore and proposes to her. Other than that, the film is surprisingly faithful to what Edgar Rice Burroughs wrote.

Notedly, this version of the story is called Tarzan of the Apes while most of the other adaptations change the title to Tarzan the Ape Man. This is because it incorporates Tarzan’s background growing up among the apes in Africa – thus being ‘of the apes’ – whereas his background as the son of a British lord and being raised among the apes was written out between the first Johnny Weissmuller film Tarzan the Ape Man (1932) and Greystoke, the fifty year period during which most Tarzan films have been made.

In these opening scenes, Tarzan’s origin story is told faithfully, albeit with mixed results. Unfortunately, these sections are hamstrung somewhat by the primitive film technology of the time. In order to show a child being raised among the apes, the film is required to portray the apes as characters. All that was available at the time the film was made were monkey suits, which look tatty today, or having the actors interact with real primates. The film tries both of these but the apes never develop the characters they do in Greystoke where they were played by sophisticated animatronics and makeup effects – it may well be that the decision by filmmakers to eliminate Tarzan’s background from the 1930s to the 1980s was a canny one based on what the technology could provide.

Elmo Lincoln was a former marshal and stevedore who had a 52″ chest. Though Edgar Rice Burroughs hated the casting, Lincoln has a great primality and majesty in the role and holds up fine against the other screen Tarzans. Elmo Lincoln went onto play the role of Tarzan in three subsequent silent films, The Romance of Tarzan (1918), The Revenge of Tarzan (1920) and the serial The Adventures of Tarzan (1921). Jane, played by Enid Markey, is very much cast in the role of a Mary Pickford heroine, although seems far too wallfowerish and fails to stand up against the other great screen Janes – Maureen O’Sullivan, Andie McDowell, Minnie Driver.

The version of the 1918 Tarzan of the Apes that remains in existence today is unfortunately not the complete original. The original version of the film is purported to be three hours long but the existing print that is seen today has been cut down to 73 minutes in length.