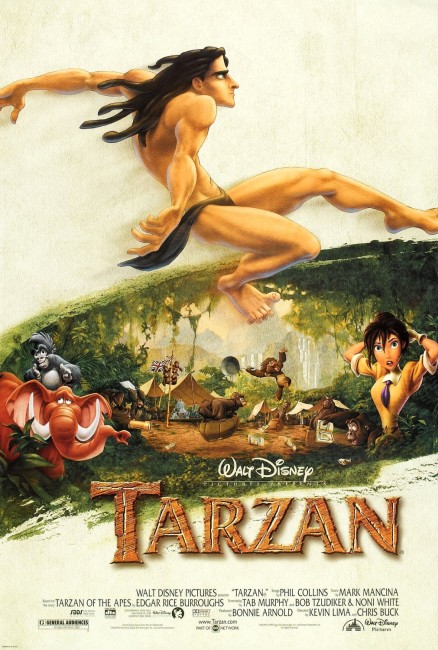 A couple and their young child are abandoned on the African coast by a shipwreck and build a treehouse in the jungle. After a leopard kills the couple, the baby is adopted by Kala, an ape mother who has lost her own child. The child, named Tarzan, grows up among the apes, where he is constantly having to fight for acceptance. One day, an expedition led by Professor Archimedes Porter and guided by the hunter Clayton comes to the jungle. Tarzan saves Porter’s daughter Jane from baboons and becomes captivated by her. However, as Jane teaches Tarzan to speak English, Clayton schemes to fool Tarzan into helping him capture the gorillas.

Tarzan is one of a handful of characters – along with Sherlock Holmes, Dracula and the Frankenstein monster – that has enjoyed an extraordinary screen proliferation. What must be said about Tarzan is that despite the enduring quality of the character, few among the sixty odd Tarzan films are particularly good. The first two Johnny Weissmuller films – Tarzan the Ape Man (1932) and Tarzan and His Mate (1934) – were the best, the first a loopily cute jungle romance in pidgin English, the second an enthralling adventure film.

The remaining ten Weissmuller films and the numerous imitators are insipid adventure films where weak, interchangeable adventure plots sit alongside laughable jungle soap operatics as Tarzan and Jane play tree house where the elephants operate makeshift elevators and Cheeta does the laundry. With the origin tale out of the way, every Tarzan film and tv series is then stuck with telling jungle adventure stories and after a time there are only so many poacher, lost city and greedy adventurers looking for elephant graveyard stories that can be told before things blur into a sameness. Even Edgar Rice Burroughs discovered this problem after fifteen Tarzan novels.

Tarzan from the 1980s onwards has become a good deal more environmentally conscious but that too has become a cliche. There are only a handful of Tarzan films worth watching – the aforementioned first two Johnny Weissmuller entries, some of the Sy Weintraub entries of the 1960s, and of course the superlative Greystoke: The Legend of Tarzan, Lord of the Apes (1984), which filtered the Tarzan myth through the English arthouse, elevating the pulp originals with a seriousness that not even Edgar Rice Burroughs had originally conceived.

When I first heard that Disney were going to do an animated Tarzan, I shuddered at the thought. What immediately came to mind was something akin to Disney’s animated version of Rudyard Kipling’s The Jungle Book (1967) – the original stories of which were the model for Tarzan – where Mowgli was accompanied by singing animals. The idea of Tarzan accompanied by musical chimpanzees and the film pitched down to the level of some of the other Disney films of this era such as Aladdin (1992) and Hercules (1997) where any potential seriousness was buried under constant pop culture in-references and one-liners was not a particularly promising prospect.

The surprise then is that Disney’s Tarzan turns out halfway decent. It achieves this largely by avoiding the silliness of other 1990s Disney films like Aladdin and Hercules and taking itself seriously. Moreover, it manages to squeeze new things out a story that has been done to death by now (see below for the other Tarzan adaptations). Being a Disney film, it is able to give far more time over to Tarzan’s childhood than any other Tarzan adaptation, simply because a young boy surrounded by talking apes is something that Disney animation can do far better than any live-action film.

The first half is surprisingly faithful to Edgar Rice Burroughs’ book. We get the full origin story of Tarzan’s parentage as the abandoned child of shipwrecked British aristocracy – there is a shipwreck instead of a ship’s mutiny, however all the scenes with Tarzan’s adoption by Kala, his discovering the treehut, the child’s primer and taking the knife are there. Tarzan’s parents, the Clayton/Greystokes are never named, although there is the supporting character of Clayton who comes to the jungle with the Porter expedition in the book and is here elevated into a major villain (although there is no indication that he is related to Tarzan in any way). The film does depart from Burroughs’s book towards the end, adding a plot about Clayton’s plans to capture the apes and the big drama of Tarzan being duped into showing their hiding place.

Disney provide the most obvious solution to dealing with the depiction of Tarzan’s life among the apes that comprise the early section of the book by casting the apes as standard Disney talking animals. This does reduce Burroughs’s serious first section to cutsie family entertainment and places much more emphasis on child-like fun among the apes as Tarzan grows up, with the addition of stock comedic supporting characters, even an impromptu tin pan orchestra as the apes go wild in the human encampment. For the most part though, the apes come across with dignity rather than being comic caricatures.

The character of Tarzan now becomes the eternal child and the story is in essence a coming of age tale. The film also throws in some clever asides explaining aspects of the Tarzan myth – the origin of the yodel is the young Tarzan’s natural ability at imitating other animals and the reason for him emerging as such an outstanding athlete and fighter is his trying to keep up with and be accepted by the rest of the ape tribe.

Modern Disney animated films have determinedly pushed an envelope in terms of trying to discover what can be done with animation. The dance sequence in Beauty and the Beast (1991) and the opening of The Lion King (1994) pushed 3-D computer animation to new unheard of levels of achievement. During the vine-swinging and branch-surfing scenes, the animation camera leaps right in there with Tarzan, flipping, diving and ducking through the foliage with exhilarating pace like the camera has been placed on a high-speed rollercoaster. When it comes to the action sequences, Tarzan’s fight with the leopard proves a show-stopper. However, this is surpassed by Tarzan and Jane’s breathlessly exciting flight from the baboons.

In all other regards, Tarzan is top-notch. Rosie O’Donnell as a brattish ape and Wayne Knight as a gauche elephant register so strongly and endearingly that one is rarely ever aware that Disney is wheeling out their standard formula sidekick characters. Phil Collins’ songs are the only miscalculation – the blandly MOR Collins seems a hard stretch to imagine as someone appropriate to musically accompanying primal jungle heroics – but these are kept to a thankful minimum. Minnie Driver makes a delightful Jane – her blend of prim Victorian forthrightness and coy delight makes for a combination so appealing that she surely tops all other live-action competitors hands-down for the sexiest performance of the year.

Disney subsequently spun Tarzan out as an animated tv series The Legend of Tarzan (2001) and then a video-released film sequel Tarzan & Jane (2002).