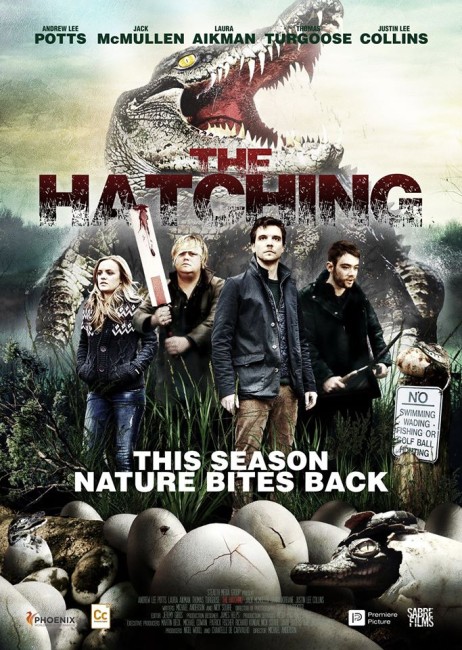 Tim Webber returns to Somerset Downs after fifteen years to take over management of his father’s stonemason business, while his girlfriend Lucy joins him to take up a teaching position. The landlady’s dog goes missing while Tim is fishing in the canals and there are reports of girls having disappeared in the area. Tim realises that it is a crocodile lurking in the canals. Moreover, he suspects that the crocodile comes from a time as a child when he and several young friends broke in to a nearby crocodile farm to steal some eggs.

Previous films on the subject of the killer crocodile have been set in locations such as the Southern US, Australia and Africa where the crocodile and alligator are naturally found. Right off the bat, there seems like there should be something tongue-in-cheek about a killer crocodile film set in the rural British wetlands. Surprisingly enough, The Hatching takes itself seriously the whole way through and plays its premise out without making fun of it. It is however a stretch of an imagination seeing a crocodile jumping out of canals in the placid English countryside to munch on people.

On the other hand, you also feel like The Hatching, while generally well made, misses the mark on a wider perspective. Director Michael Anderson does nothing much to generate suspense from the killer crocodile scenes. There’s one jump out of your seat moment where the crocodile unexpectedly leaps out of the canal to snatch an old lady and some tension where the two idiots of the town (Jack McMullan and Danny Kirrane) set out to trap the crocodile with a goat and end up facing it off. On the other hand, there is nothing here that has the tension of the classics of the genre such as Black Water and Rogue. The payoff is fairly tepid.

The other thing that throws the film off is some odd storytelling choices. About two-thirds of the film plays out as a killer crocodile film, at which it does okay, nothing great. However, about two-thirds of the way through the story suddenly jumps tracks and becomes something entirely different involving Thomas Turgoose as the town’s butcher who has a penchant for abducting women and serving their flesh up to the crocodile and in his meat pies. The film then becomes one about the efforts to find him after he kidnaps Andrew Lee Potts’ girlfriend Laura Aikman. These scenes are fairly standard, although the thing that got me was if Turgoose had been abducting girls to feed to the crocodile for fifteen years, why is it only now there are reports of missing women all over the news?

Director Michael Anderson should not be confused with either the other British director known for Around the World in 80 Days (1956), Logan’s Run (1976) and a number of other genre films, or for the dwarf actor who appeared in Twin Peaks (1990-1).