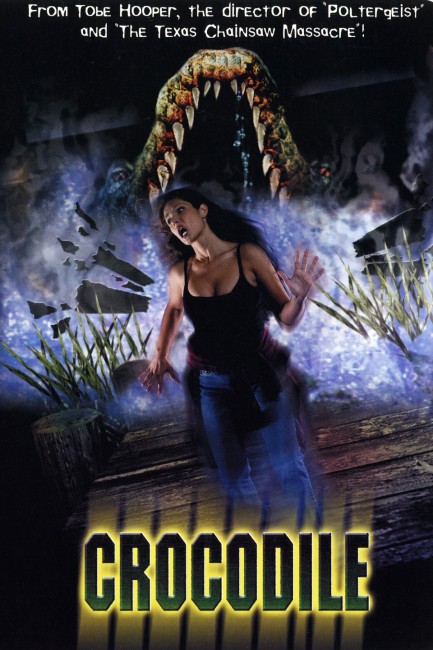 A group of friends head up to Sobek Lake for springbreak. Brady finds it awkward because Claire, the girl he had a major crush on, has been invited but so also has Sunny, a girl who now likes him a good deal. They head out onto the lake in a rented houseboat. Around the campfire, Kit tells the story of Harland Clemens who built a hotel in the area a century ago and imported a crocodile he worshipped but how it took revenge when Harland’s son destroyed its’ eggs. Fishermen now find some eggs on the banks of the lake and are attacked by a giant crocodile after they destroy them. The group find the rest of the eggs and one is placed in Claire’s backpack as a prank. The group are then pursued by the giant crocodile determined to gets its’ egg back and devour every one of them in revenge.

Tobe Hooper will always be the director who made The Texas Chain Saw Massacre (1974), a landmark film that redefined the horror genre. This propelled Hooper onto a Hollywood path and he turned out some strong genre entries for a number of years – the Stephen King tv mini-series Salem’s Lot (1979), a fairly good slasher film The Funhouse (1981), the fine Steven Spielberg-produced ghost story Poltergeist (1982), the hugely entertaining alien vampires film Lifeforce (1985) and The Texas Chainsaw Massacre 2 (1986), a sequel that pushed the original into realms of outrageously funny black comedy. However, it seemed like the talent switch suddenly went off after that point and fairly much everything that Hooper has made from 1990 onwards, which has included I’m Dangerous Tonight (1990), Spontaneous Combustion (1990), Night Terrors (1993), The Mangler (1995), The Apartment Complex (1999), Mortuary (2005) and Djinn (2013), has felt like clumsy amateurism. (See below for a full list of Tobe Hooper’s films).

By the time of Crocodile, Tobe Hooper was well into a decade of making consistently mediocre, forgettable and frequently downright bad films. In fact, his career nosedived so much so that while he was putting out about a film every second year in the 1990s, the decade ahead becomes increasingly more sporadic in its output. Crocodile is no different. It is as though Hooper no longer cared what he was making and is only going through the motions. He has simply gone with the standard formula plot of teens in peril that countless horror films have done before. The teens here are much more unlikeable than most – almost none being sympathetic and their journey on foot back through the swamps almost entirely consisting of bickering and bitching at one another.

The opening scene with the crocodile attacking a fisherman in his vehicle looks ridiculous. Wisely thereafter, Hooper keeps the crocodile only briefly glimpsed for most of the film, which at least effectively turns it into a shadowy menace. In Hooper’s favour, he does pull off a couple of decent attack scenes with the full-size K.N.B.-provided crocodile – one where Sommer Knight is trapped with her foot caught in a tree root and is devoured alive; another with the croc bursting in through a convenience store wall, smashing the store up then chomping a pick-up truck and causing the entire store to explode from spilt gasoline.

Nu Image produced a sequel with Crocodile 2: Death Swamp (2002) from the same screenwriters but without Tobe Hooper in the director’s seat.