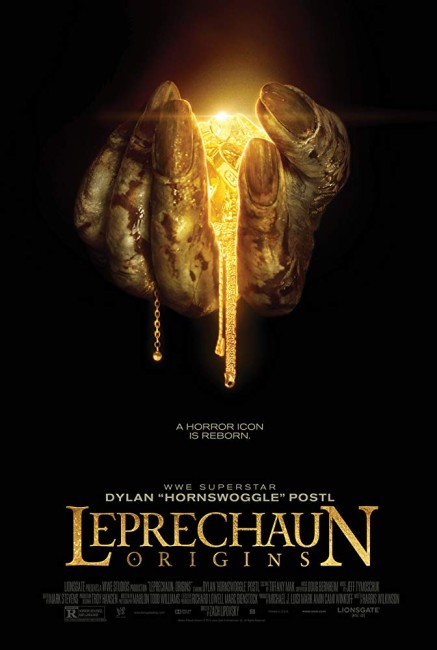 Two couples arrive at a village in rural Ireland on a backpacking tour. In the village pub, the local Hamish persuades them to detour to view a nearby sight. Instead, he locks them inside a farmhouse where they discover that they are intended as a sacrifice to a leprechaun. As becomes apparent, the villagers have taken the leprechaun’s gold and are appeasing it with a string of sacrifices of passers-by. As the leprechaun comes to claim them, they begin a furious struggle for their lives.

Leprechaun: Origins is another entry in the Leprechaun series. This began with the cheaply entertaining Leprechaun (1993), starring 3’6″ foot actor Warwick Davis as a malevolent leprechaun. This was quickly spun out into a series with Davis becoming a Freddy Krueger-like monster devising fiendish deaths for a parade of victims. In swift progression we saw Leprechaun 2/One Wedding and Lots of Funerals (1994), Leprechaun 3 (1995) and Leprechaun 4: Leprechaun in Space (1996). The series was then revived with Leprechaun in the Hood (2000), which bizarrely threw Davis’s leprechaun in amidst a rap/ghetto environment, and this too led to a sequel with Leprechaun: Back 2 tha Hood (2003).

The surprise that makes you do a double-take is that this revival of the Leprechaun series is produced by WWE Studios, a production company arm of the WWE tv wrestling leviathan. They have made several films as vehicles for popular wrestlers – see the likes of The Marine (2006) and sequels, 12 Rounds (2009) and The Reunion (2011) starring John Cena, See No Evil (2006) and sequel starring Kane, The Condemned (2007) with Stone Cold Steve Austin, Knucklehead (2010) with The Big Show and Inside Out (2011) with Triple H, even animated films that cross WWE wrestlers over with The Flintstones and Scooby Doo and Surf’s Up 2: Wavemania (2017). In this case, Leprechaun: Origins has been made as a vehicle for Dylan Postl, a 4’5″ wrestler who goes by the moniker Hornswoggle and has played various roles in the WWE including appearing as a leprechaun, as Vince McMahon’s illegitimate son and has fought other small-size wrestlers in the ring.

When approaching Leprechaun: Origins, it is best to try and forget everything about the 1992 film and any of it sequels. The original Leprechaun films featured Warwick Davis as a malicious figure, evilly cackling as he devised nasty effects-driven fates for victims. The leprechaun now has no dialogue – in fact, we don’t even get to see any of its features, which are kept hidden and only briefly glimpsed. There is a theme about it exacting revenge from the villagers in terms of a demand for human sacrifice but there is no sense of it devising nasty fates for each of the victims; now it is more of a rampaging monster, Indeed, it would be entirely possible to write the word leprechaun out of the film and transplant everything else to rural backwoods America and not change the film one iota.

There is also a completely new aspect about the leprechaun not being able to move beyond the standing stones placed around the immediate area – something that would have surely obviated the other films, which all take place outside of Ireland (even if the Ireland we see here has been shot in Canada). The other complaint might be the title Leprechaun: Origins is meaningless as we get nothing that could be even vaguely construed as relating to the origin of The Leprechaun. Indeed, beyond the title, it is hard to see how this and the Leprechaun films featuring Warwick Davis are even connected.

The other important difference is that the original Leprechaun films were horror comedies in the model patented by the A Nightmare on Elm Street films featuring a campy one-liner spouting boogeyman. By contrast, Leprechaun: Origins takes itself seriously. As a result, it works as far more of a survival horror film with the teen victims on the run pursued by a monster.

The gore effects are fairly tame, especially in comparison to the cheesy makeup effects set-pieces that drove the 1990s originals, although there is one full-on effect where the leprechaun tears out Andrew Dunbar’s spinal column.

Leprechaun Returns (2018) was a further sequel that returned to the continuity of the other films.

In genre material, director Zach Lipovsky had previously made Tasmanian Devils (2013) and went onto the likes of Dead Rising (2015), and co-directed the amazing Freaks (2018) and the live-action Kim Possible (2019).