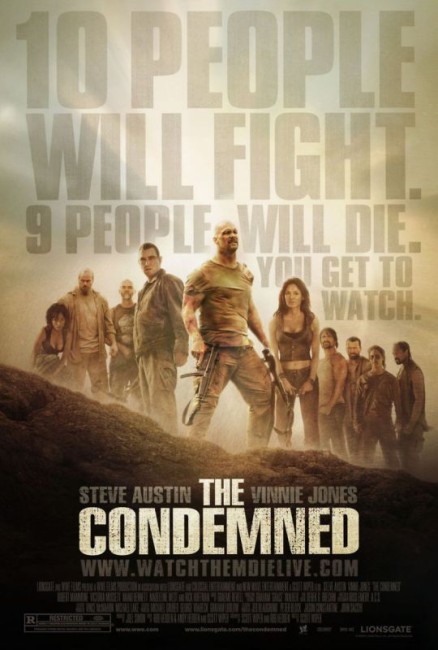 Producer Ian Beckel mounts a tv show ‘The Condemned’ that is to be broadcast via the internet. From various foreign prisons, he has gathered ten of the toughest criminals who have been sentenced to be executed and has brought them a remote island in the Pacific. The island is wired with cameras, the criminals are let loose and told that the last one left alive will be allowed to go free and win a huge cash prize. The contestants are also wired with explosive bracelets that will detonate if they try to remove them. Among the contenders is the mysterious American Jack Conrad, who is brought in from a prison in El Salvador as a last minute replacement. The broadcast gets underway and proves a huge ratings success. However, as Jack starts to defeat all the others competitors, he finds that Beckel is weighing the game against him.

The Most Dangerous Game (1932) is a classic film, concerning a man and a woman who are shipwrecked on an island by a Russian count who sets them free to defend themselves with their bare hands while he pursues with rifles and dogs. The Most Dangerous Game has become an archetype for the genre, spawning numerous remakes, copies and variants. Into the 1980s and 90s, the basic premise was appropriated by several action movies with the likes of Avenging Force (1986), Deadly Prey (1988), Death Ring (1993), Hard Target (1993), Surviving the Game (1994) and The Eliminator (2004) where the hunted hero becomes a traditional action movie hero who defeats his hunter(s) with his fists and feet, as well as science-fictional variants such as Turkey Shoot (1983), Slave Girls from Beyond Infinity (1987), Star Hunter (1995) and most famously Predator (1987).

That said, the films that The Condemned remind of more than any of these is Battle Royale (2000), which likewise had a group (high school teenagers there, convicts here) abandoned on an island and forced to survive with the last contender alive being allowed to go free, and before that the French science-fiction film The Prize of Peril (1983) about a future where contestants fight for their lives on a tv gameshow. There was of course the subsequent Young Adult hit of The Hunger Games (2012). The Condemned‘s writers Rob Hedden and Scott Wiper have almost certainly borrowed from Battle Royale even down to the explosive collars that every contender is given, as well as the controllers randomly arming the contestants with different weapons. Of course, the one difference is that Battle Royale came out just before Survivor (2000– ) created the reality tv fad, whereas The Condemned comes out several years after.

The Condemned has been made as a vehicle for wrestler Steve Austin. Steve Austin, usually better known by the sobriquet Stone Cold Steve Austin – presumably of intentional similarity to Lee Majors’ bionic hero in The Six Million Dollar Man (1973-8) – is one of the more popular wrestlers to emerge from the World Wrestling Federation/World Wrestling Entertainment during the 1990s. Austin’s appeal was largely one of a brawling bad-tempered redneck, which gained a surprising degree of popularity (that may well say something about the show’s audiences), making him into one of the WWE’s superstars. The Condemned has clearly been made mindful of the huge popularity that fellow wrestler The Rock/Dwayne Johnson enjoyed after milking his success in the ring out into an acting career. The Condemned even comes co-produced by the WWE with WWE head Vince McMahon listed as an executive producer and became one of a series of films highlighting popular WWE wrestlers that have been made since the late 2000s.

The Condemned works passably as an action movie. Unfortunately, the role that Steve Austin is cast in is one that requires him to keep his natural self in check. Rather than playing into Austin’s redneck persona, the film casts him as a peaceful warrior who prefers to remain uninvolved and kick heads only as a matter of last provocation. The role is simply too quiet a one for a barroom brawler like Steve Austin. (Indeed, this is a role that would have been perfect for The Rock who can suggest caged muscularity even with his glare). The script outfits Austin’s character with a cliche background – though he is in a jail, he is not a criminal but in fact a Black Ops CIA operative; he only wants to return home to his girlfriend, an ordinary solo mom from the Midwest; he does not kill indiscriminately; he’s a patriot and loyal to his country. Unfortunately, none of this succeeds in animating Steve Austin as a screen presence. He stomps awkwardly through the landscape, looking like a sullen, overweight hick with a hangover trying to remember where he parked his pickup truck. As an actor, Austin has zero screen charisma, not even a sense of humour. He makes Sylvester Stallone look like a character actor by comparison.

One of the more bizarre aspects of The Condemned is when the film stands still to take a moral stance against the exploitation of violence for television entertainment. This is standard stuff, nothing new and would be okay were The Condemned not co-produced by the WWE, which has made its millions out of exploiting violence as television entertainment and surely makes such proclamation an absurdly hypocritical one. Admittedly, the WWE does not go so far as deliberately killing competitors but when you watch their various cage matches and elimination competitions, you can hardly deny that the same people watching and rooting for their favourites would surely be exactly the same audience that would be watching the theoretical show on display here.

The Condemned is directed by Scott Wiper, an actor who had previously directed the action film A Better Way to Die (2000) and subsequently directed a further WWE film The Marine 3: Homefront (2013). Co-writer Rob Hedden had previously directed and written genre films like Friday the 13th Part VIII: Jason Takes Manhattan (1989), The Colony (1995) and Alien Fury: Countdown to Invasion (2000), as well as co-written Clockstoppers (2002).