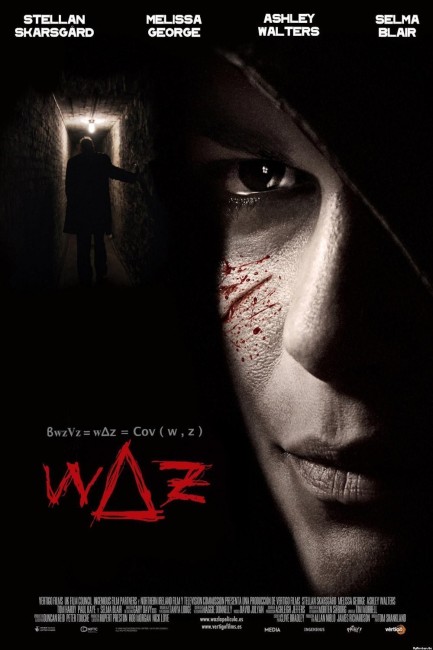 aka The Killing Gene

New York City police detective Eddie Argo is paired with new partner Helen Westcott to investigate a series of murders in which each of the victims has the phrase ‘WΔZ’ carved into their bodies. Argo finds the victims are all connected to the suspects in a case he investigated several years ago. The trail takes them to an under-funded scientist selling black market drugs where they discover that ‘WΔZ’ is a phrase that comes from evolutionary biology referring to a gene that drives a species to defend against an attacker. The investigation leads to Jean Lerner, a woman who was brutally gang-raped years ago and is now taking revenge. As Helen discovers, people in the police department appeared to have conspired to have Jean’s case dismissed.

Principally, WΔZ is a police procedural and fully two-thirds or more of the film operates in this vein, although it can be said that the film does enter into horror territory during its last third. These initial scenes, alas, are the least interesting sections of the film. Stellan Skarsgård has been cast as the lead and plays glum, unhappy and intent. Fine actor that Skarsgård is, you have to say is that the burned-out detective role is just not something that he is suited to.

More crucially, WΔZ is a British/Irish-made film pretending to be set in the US. While the filmmakers did go to New York City to pick up some of its trademark locations, the bulk of the film was shot in Belfast, Northern Ireland. As a result, and without even having looked up these details before watching the film, WΔZ‘s gritty milieu looks almost but just not quite right in ways that you are unable to put a finger on. The attempts to portray ghetto and inner city troubled areas often feel like they have been production designed by someone who has never visited such areas and are merely going on what they imagine them to be.

Tom Shankland expends much effort to drive home the grimness of the urban environment but the film never does much to engage. There is never the sense that you get in most police procedurals of the detectives following a trail of clues and the sudden aha moment when they start to piece things together. Finally, after about the one-hour point, the film starts to pick up with the introduction of Selma Blair who gives a very weird and disturbing performance as the killer – moreover, manages to add a novel twist to the Torture Porn theme by making her victims suffer by watching their loved ones being tortured. What we eventually end up getting could be described as I Spit on Your Grave (1978) having been rewritten as a police procedural. Alas, far too little time is given over to Selma Blair who would almost certainly have owned the show if she had been given centre stage as say Camille Keaton was in I Spit. The film also comes with quite a left field revelation about Stellan Skarsgård’s involvement in the case, which at least redeems much of the dullness of the rest of the show.

The other complaint about the story is that it raises the idea of the WΔZ formula and even gives scientist Paul Kaye a scene where he explains it as being something to do with the genetic capacity of a species to sacrifice some of its number for the sake of the group in order to fend off an attacker – the film even meaningfully namedrops Richard Dawkins and passes in closeup over a copy of The Selfish Gene (1976). And yet, for all its raising this intriguing idea, the film does absolutely nothing with it – the WΔZ formula bears nothing whatsoever to do with Selma Blair’s motivation in any way that I was able to determine.