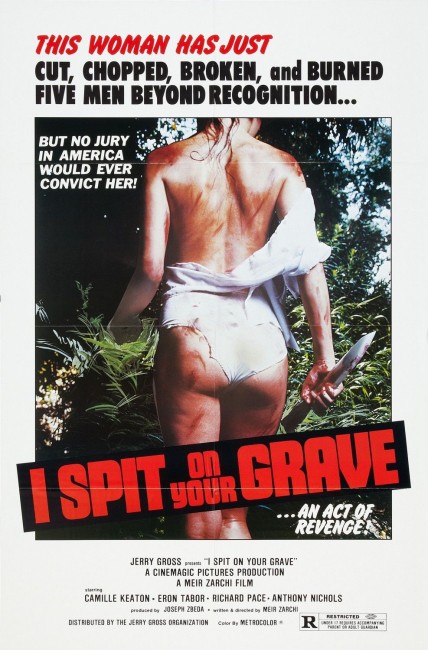 aka Day of the Woman

Jenny Hills rents a country farmhouse in Connecticut for the summer where she intends to spend the time writing a novel. Four local men take to harassing her. One day they drag her away and take turns raping her. They leave one of their number, a gawky idiot, with a knife to kill her but he is unable to do so. Dragging herself back home, Jenny methodically sets out to take revenge and kill each of the men.

Day of the Woman/I Spit on Your Grave was one of the films made in the 1970s that seemed to offer brutal shock therapy wake up calls to middle-class ennui. In these films, city slickers would usually stray off the beaten path and encounter forms of brutalisation from backwoods hicks. The first films in this genre were Straw Dogs (1971), Deliverance (1972) and Wes Craven’s The Last House on the Left (1972) and the genre progressed through the disturbing likes of The Texas Chain Saw Massacre (1974), Forced Entry (1975) (which prefigured I Spit on Your Grave in terms of its themes), Death Weekend/The House by the Lake (1976) and The Hills Have Eyes (1977).

I Spit on Your Grave was originally made under the title Day of the Woman and played some theatre chains and horror festivals under that title in 1978. It did not attract much attention until it was picked up for distribution by The Joseph Gross Organization in 1980 and given a luridly exploitative new name I Spit On Your Grave. There it developed a reputation as one of the most notorious films ever made. It was promptly banned in countries such as Germany, Australia, New Zealand and labelled a Video Nasty in the UK. In the US, where it was distributed, it achieved new levels of notoriety with critics like Roger Ebert leading a vehement attack against it and feminist groups targeting it in their backlash against the exploitative portrait of women in early 80s slasher films. I Spit on Your Grave has achieved such a level of notoriety that it is usually tossed in raw and bleeding as Exhibit A whenever a morality group wishes to nail the horror/exploitation film to a cross.

I Spit on Your Grave is a genuinely disturbing film. Despite a number of crudities in the technical department – the poor acting (lead actress and rapee Camille Keaton is incidentally Buster Keaton’s granddaughter), the relative crudity of sound quality and the complete absence of any musical score – the film evinces a raw and raggedly horrifying effect. In fact, the absence of a musical score works in the film’s favour – it leaves it without any traditional dramatic cues, just the sense that what is happening is raw and real.

I Spit on Your Grave is a film that pins you down as you watch, confronts an audience with having to watch not one rape but three in a row – a sequence that is drawn out for some forty minutes. If the success of a film is to be measured in terms of the strength of the reaction it elicits from its audience then I Spit on Your Grave could be the most effective film ever made. This author has never seen another film have the same effect.

I first saw I Spit on Your Grave in New Zealand in the 1980s when its ban had just been lifted by new censor Arthur Everard – where its banning up until that point had only served to heighten its reputation. The screening was filled with hardened biker types among others. Afterwards, everybody left the theatre in a stunned silence, some walking out with white faces.

It is this that makes one query the exploitation label that I Spit on Your Grave is usually hit with. It is not, for example, a film that one could say exactly portrays the acts of rape in any way that would engender empathy with the rapists or that asks the audience to cheer the rapists along. Indeed, if the feminist cause ever wanted to make a film to convey the horror of rape, then it is doubtful they could ever envision something as shocking as this.

If anything, what I Spit on Your Grave serves as is a refresher course for feminist vigilantes where it seems to be openly endorsing the dubious politics of personal revenge – interestingly, this was one of the points that was never attacked by the film’s moral critics. I Spit on Your Grave makes interesting comparison to Abel Ferrara’s Ms 45/Angel of Vengeance (1981), which told a similar story but had the heroine’s vengeance trail less morally certain.

Aside from the abovementioned sequel, the only other film director Meir Zarchi ever made was the little seen revenge film Don’t Mess with My Sister/Family and Honor (1985).