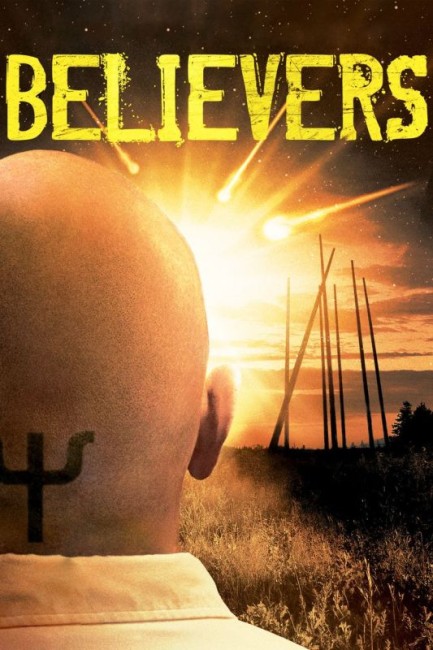 Paramedics David Vaughn and Victor Hernandez are called out to the edge of town where a woman has collapsed. A truckload of men then suddenly appear and snatch the woman, Rebecca, and her young daughter Libby at gunpoint. David protests that doing so will kill the woman and so the men shoot and wound Victor and force the two of them to come as well. David and Victor find that their captors are members of The Quanta Group, a cult led by the mysterious Teacher, who believe that they have been chosen to survive the end of the world. The group insist that they are all going to be taken up by UFOs in a few hours time. David is scathing of their beliefs but when The Teacher appears to raise Rebecca from the dead and offers up information about them that he could not have known, doubts begin to set in.

It is hard to believe that it is nearly a decade now since The Blair Witch Project (1999) turned the world on its head. The great surprise about Blair Witch‘s runaway success is that co-directors Daniel Myrick and Eduardo Sanchez both took eight years to mount a comeback. Both reappeared in 2006, during which time the impetus they had from Blair Witch had faded considerably – indeed, all the films they have made subsequently have only been released to dvd. Sanchez reappeared with the quite good Altered (2006) about a captured alien and went onto make the horror film Seventh Moon (2008), Lovely Molly (2011) and Exists (2014) and to co-direct ParaAbnormal (2009). Myrick however has been quite productive, first directing the non-genre The Strand (2006), which hardly appears to have been seen by anybody, and then a host of genre productions with Believers, Solstice (2008), The Objective (2008) and Under the Bed (2016), as well as producing the likes of Rest Stop (2006), Sublime (2007), Otis (2008), Alien Raiders (2008), The Presence (2010) and Blair Witch (2016).

Believers treads a familiar path – the story of the individual who is brought into a UFO cult – that we have seen variants of in films like Uforia (1985), the British tv mini-series Imaginary Friends (1987) and Sound of My Voice (2011). Certainly, Daniel Myrick starts the film off with an undeniable fascination, shooting the action in dense, tight cuts with a busy handheld camera and on grainy film stock. One’s attention is drawn into the mystery that is going on. There are times where Myrick creates something spookily eerie – like the jolt when the prisoners suddenly see Deanna Russo alive again. Moreover, the role of the cult leader has been cast with the great and inscrutable Daniel Benzali, one of the most underrated actors in America. One sits expecting Believers to open out into something intensely fascinating.

Alas, the more one sees of it, the more Believers slides into the disappointing. One was hoping for a film that delved into examining the psychology of believers or hung around the central characters’ uncertainties as they are drawn into believe. However, Believers does none of these things, excepting the last in a perfunctory way. Certainly, things become interesting when we see Jon Huertas swaying over into belief – the best scene being one where Deanna Russo seduces him, convincing him that the group offers everything that he already believes as a Catholic.

The rest of the time Daniel Myrick resorts to old hat cliche scenes of showing persuasion by torture and deprivation. As some of the recent documentary interviews with the survivors of Jonestown and Waco reveal, the believers were perfectly rational people who were convinced that what the leaders promulgated was the truth. Believers is crucially never a film that confronts how or what persuades rational people to believe these things. For that matter, we never actually learn what it is that the cult believes, aside from some generic end of the world/UFO salvation notions. All that we have feels like is a film that is churning through cliches of what a cult is rather than attempting to examine the phenomenon.

Believers is also lumbered with the central casting of Johnny Messner. Messner is handsome, good-looking and should be out there doing action movie roles. You can believe his earnest conviction but Messner never suggests that he is an intellectual actor. Alas, what the role here needs is a less physical and a more ordinary seeming actor. With Messner, you expect him to break out and start sorting out the cult with his fists and/or a gun and when he doesn’t the feeling is of a heroic lead who is cocked and ready but has nowhere to go.

The worst part about Believers is the ending. [PLOT SPOILERS]. One could predict it coming from fairly much the start of the film and variants on it have appeared through works like the aforementioned Uforia, Imaginary Friends or Breaking the Waves (1996), End of the Line (2007) and Where the Devil Hides (2014) – where suddenly what we are thought was a crazy belief is revealed to be real after all. It is an ending where Believers reaches a point of having had nothing to say about cults other than that maybe sometimes people with crazy beliefs can be right after all. Frankly, one expected far more from Daniel Myrick.