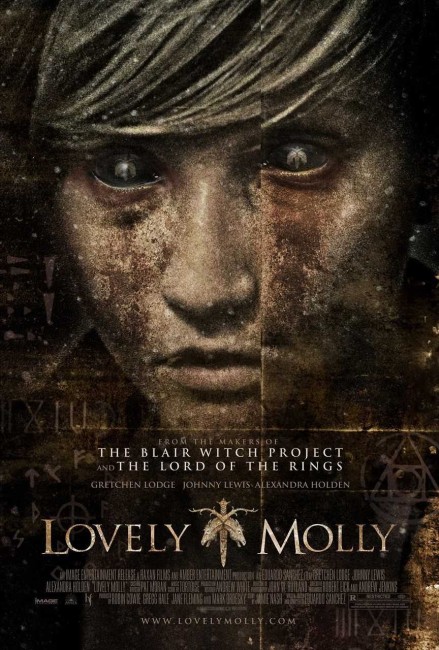 Shortly after they are married, Tim and Molly Reynolds move into the home of her late parents. Molly begins to insist that she can hear and see things but Tim cannot. With him away for long periods in his job as a truck driver, Molly’s mental state begins to collapse and he is certain that she has started using drugs again.

Eduardo Sanchez will always have the credit of ‘co-director of The Blair Witch Project (1999)’ to his name. Sanchez has never produced anything else that has had such a high-profile as Blair Witch, nevertheless has made a steady stream of well-above-average films. The first of these was the fascinatingly weird alien prisoner film Altered (2006) and he has also made Seventh Moon (2008), ParaAbnormal (2009), the A Ride in the Park episode of V/H/S/2 (2013) and Exists (2014), as well as produced Blair Witch (2016).

On the face of it, Lovely Molly could be a ghost story or perhaps a possession film. I say ‘could be’ because it is never exactly clear what is going on. One of the hallmarks of Sanchez’s films is a deliberate crypticism and of his withholding clear explanations from us – as was the case in Altered, while it can be seen in retrospect that he was probably responsible for the lack of answers that we had in Blair Witch. When it comes to Lovely Molly, this seems to have frustrated some reviewers. While I am in full agreement that this is something that can be intensely annoying, it is also something that I think Eduardo Sanchez makes work well here.

Sanchez has demonstrated a preference for Found Footage in other films – Blair Witch Project, A Ride in the Park and Exists. Lovely Molly is not a Found Footage film but Sanchez is often cutting back and forward between camcorder footage and regular camerawork. This is often used to generate a sense of there being something that Gretchen Lodge hears or perceives to be present. However, Sanchez refuses to clearly show anything or else pulls back to the viewpoint of other people who can see nothing there.

The film sits in an ambiguous place where you cannot be sure whether Sanchez is telling a standard haunted house/possession story or else he is making a film about one woman’s progressive mental disintegration and collapse into drug addiction. Usually a haunted house film will delve into the agency behind the haunting, seeing it as some ancient evil or a wronged soul in the past that is demanding vengeance in the present. However, Sanchez refuses to indulge any of these tropes and we never have any clear idea what the agency Gretchen Lodge is certain is there might be.

It is just as difficult getting a grasp on the mental illness/drug addiction explanation as Sanchez keeps dropping hints that suggest otherwise. For example, what is the significance of the cupboard – especially when we come to the coda where Alexandra Holden as the sister opens it and seems to be subject to the same forces? What is the significance of the video footage of the murdered deer in the forest and Alexandra Holden’s cryptic accusation “you killed him”? Or is this a reference to their father? If so, what are we to make of the final scenes where the Gretchen Lodge walks out the door nude to be taken into the arms of a briefly glimpsed creature that resembles an upright deer? I also failed to fully understand the hurried sequence of events that come towards the end where camcorder footage seems to show Gretchen’s husband Johnny Lewis with a neighbouring woman, after which a local child goes missing and he returns home to find the police have cordoned the area off as a body is found.

All of this baffling and wilfully cryptic material would be frustrating if Lovely Molly were not anchored by the central performance from Gretchen Lodge. It is a surprise that she has not become better known as a result. It is an amazingly brave performance that requires Lodge to travel all the way from the sweetly innocent newlywed we meet at the start of the film to scouring the depths of the soul in her drug addiction and collapse into madness. The scene where she sits on a couch in a slip teasing and taunting pastor Field Blauvelt without being overt contains some fantastically good acting.