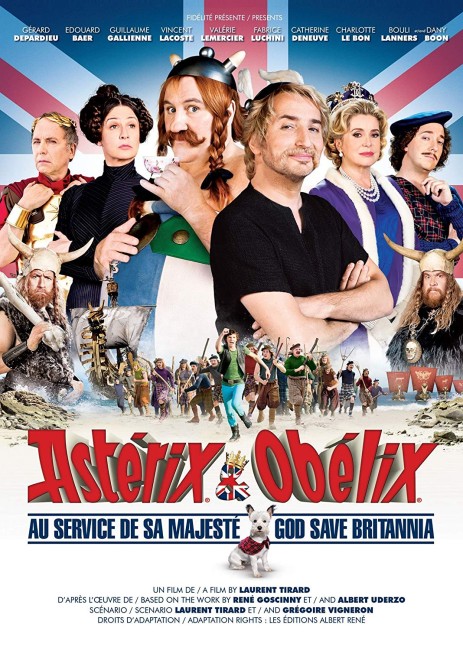 Julius Caesar mounts an invasion of Britannia. At siege, Queen Cordelia despatches Jolitorax to seek the help of his cousins in Gaul. In their village, Asterix and Obelix have been given the task of making a man out of Goudurix, a cousin from Lutetia, who is more interested in being a bard and womanising. With the arrival of Jolitorax, they set forth with a barrel of the magic potion to aid the Britons. Meanwhile, Caesar, facing a senate that has curtailed his budget, is forced to recruit the savage Normans as mercenaries. The Normans have been born without fear and eagerly head to Britannia, hoping to discover fear there because the Britons are reputed to be the most fearful people in the world. In Londinium, Asterix and Obelix are forced to hide the barrel at an inn, only for it to be taken as all the barrels confiscated by the Romans. Meanwhile, Jolitorax’s fiancee Ophelia has run off with Goudurix, finding him more fun that Jolitorax’s stiff upper-lip ways, only for Goudurix to be abducted by the Normans. In the midst of this, Asterix and Obelix begin to question their friendship, while Obelix finds himself attracted to Ophelia’s aunt Miss Macintosh.

The Asterix comic-books enjoy an enormous international popularity. Asterix first appeared in the magazine Pilote in 1959 and the stories were compiled and released in the familiar large-sized book format beginning with Asterix the Gaul (1960). The series extends to 36 books to date – 24 of these were produced by co-creators Rene Goscinny and Albert Uderzo, while Uderzo has produced a further eleven books on his own following Goscinny’s death in 1977. The books are set in a tiny village in Gaul (as France used to be known during the Roman occupation). The villagers maintain a cheerful resistance to the Romans, which usually consist of the quick-witted Asterix and his large, dumb companion Obelix beating up as many centurions as they can, something they regard as a sport, where they have a natural advantage due to the druid’s creation of a magic potion that bestows great strength. Much of history and modern culture is spoofed in some often extremely clever gags.

There have been numerous film adaptations of Asterix over the years. The French animation company Dargaud made a series of animated films – Asterix the Gaul (1967), Asterix and Cleopatra (1968), The Twelve Tasks of Asterix (1976) – the latter two both being co-directed by Goscinny and Uderzo – Asterix Vs Caesar (1985), Asterix in Britain (1986), which adapts the same comic-book as this film, and Asterix and the Big Fight (1989). There have been several animated films from other companies with Asterix Conquers America (1994) and from the French M6 Asterix and the Vikings (2006) and then the CGI-animated Asterix: The Mansion of the Gods (2014) and Asterix: The Secret of the Magic Potion (2018). In recent years, there have been a number of live-action adaptations, the common thread between these being Gerard Depardieu cast as Obelix. These have included Asterix and Obelix vs Caesar (1999), Asterix and Obelix Meet Cleopatra (2002) and Asterix at the Olympic Games (2008). Indeed, with Gerard Depardieu being the only internationally known name in the film, the actor playing Asterix has tended to be regarded as a supporting character.

Asterix and Obelix: God Save Britannia adapts two books, Asterix in Britain (1965) and Asterix and the Normans (1966). Most of the stories of either book and the central gags are faithfully replicated on screen. The bulk of the film is made up out of Asterix in Britain and all the essential plot elements – Asterix and Obelix travelling to Briton to help repel the Roman invasion; the Romans getting drunk in their search for the barrel; the football team unwittingly drinking from the barrel; its loss in the river at the end; the scenes where Asterix inspires the Britons to stand up against the Roman army with the addition of leaves to their hot water that the Britons then decide to call it tea – have been retained.

From Asterix and the Normans comes the character of Goudurix (called Justforkix in the original), a youth send to the village to learn how to be a man who is more interested in being a bard (which allowed Goscinny and Uderzo to parody rock music – his style being based on a band called The Rolling Menhirs, for instance – although this has been watered down in the film) and the arrival in the village of the Normans who have come in search of the meaning of fear because it is supposed to gave you wings. Though mixing the two stories up together, the film successfully reproduces many of the scenes from either book.

The film also amplifies the jokes that run through the original Asterix in Britain comic and allows them to play out as a series of light-hearted cultural jibes at the British. People are wont to come out with phrases like “old chap”, “by golly”, “jolly good” and “a rum thing” (which are rather amusing to see being uttered in French and subtitled); there are gags about stiff upper lip lack of expression and manners – even a scene where Valerie Lemercier and Charlotte Le Bon decide to teach a bound Norman proper manners; gags about how to pronounce vowels the English way; while Caesar bases his invasion campaign around the national habit of stopping at 5pm for a ‘hot water break’.

The Queen (played the great Catherine Deneuve) is outfitted in a colourfully eye-popping costumes modelled on the British flag and registers disgust at having to deal with the French until a boulder crashes through her roof and flattens her Corgis. There are all manner of visual gags touring Londinium with likenesses of The Beatles, punks, ancient equivalents of double-decker buses and lawnmowers and the like.

The film plays on obvious gags at times – when a tapestry is introduced and it told how it has been in the Macintosh family for generations, you know that there is going to be a gag where it gets unwound; when Asterix and Obelix enters an inn full of Romans, you just know that their cover is going to get blown – but at least the film is generally faithful to replicating the characters and the visually absurdist tone of the original comic-books. Although a gag where Julius Caesar does an “I am your father” gag to Asterix viz The Empire Strikes Back (1980) seems out of place.

The main problem is the way the characters are treated. Goscinny, one suspects, would surely be turning in his grave at a very modern gag where it is suggested that Asterix and Obelix are gay because they live together and have a small dog, whereupon Asterix spends the rest of the film trying to prove he is not. This seems to involve him engaging every girl he meets with a lame pick-up line about the energy in the place. The end of the film comes to a big schmaltzy reconciliation between the two on the meaning of true friends, which is the sort of feelgood upbeat that belongs more to an American family film.