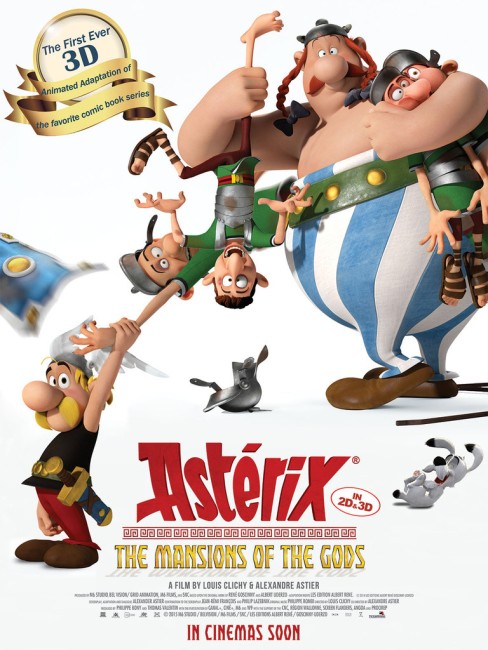 aka Asterix and the Land of Gods
(Asterix: Le Domaine des Dieux)

Caesar has a plan to deal with the pesky villagers in Gaul. He brings in the architect Squarehypoteneuse to build what he calls ‘The Mansion of the Gods’ – an apartment complex to be constructed right next to the village where Romans will settle and conquer the villagers with their more civilised ways. While hunting for boar, Asterix and Obelix come across Squarehypotneuse and a team of slaves planning to cut down trees. They thwart their plans by replanting the trees with magic acorns that sprout into full-grown trees overnight. Asterix reasons that if they give the slaves some magic potion, the added strength will allow them to go free – only for the slaves to turn around and negotiate with the Romans to be given apartments for completing the job in record time. As the Romans move in, the Gaulish villagers start hiking prices and selling local artifacts when they realise they can earn money. Asterix is disgusted with what has happened to the Gauls and decides he is going to move into an apartment. Caesar leaps on the idea and offers free apartments to the Gauls who proceed to move in en masse and then begin to adopt Roman ways.

Asterix: The Mansion of the Gods, also known in some releases as Asterix and the Land of the Gods, is one of several films based on France’s popular Asterix comic-books by Rene Goscinny and Albert Uderzo. From their first appearance in 1959, the Asterix comic-books run to 38 books, the first 24 from Goscinny and Uderzo, the subsequent ten from Uderzo after Goscinny’s death in 1977 and a further four produced by other artists and writers after Uderzo sold the copyright in 2009. The Asterix comic-books concern a village of characters in Gaul (modern-day France) in the first century A.D. who stand up against the Roman occupation with the aid of a magic potion that gives them super-strength.

The film here is based on The Mansion of the Gods (1973), which was the seventeenth of the Asterix books. The film version is written and co-directed by French writer/actor Alexandre Astier, best known for the hit comedy tv series Kaamelott (2004-9), which retells the Arthurian legends in modern form. Astier keeps extremely faithfully to the original text, only expanding and altering the story slightly when it comes to the various parties running around at the climax.

Prior to this, there had been twelve other Asterix films (eight animated, four in live-action). The Mansion of the Gods takes an entirely new approach in that it is the first computer-animated Asterix film and the first presented in 3D. I must confess I had some initial misgivings about this – the stills and trailer showed they had turned the familiar characters into rounded CGI figures, which seemed a world away from the richly textured but extremely 2D characters and panels of the original comic-books. That said, as one soon absorbed into the film, the difference was forgotten and what transpires emerges as the best of all of the Asterix films to date.

All of the other Asterix films have tried and occasionally succeeded in their own way but The Mansion of the Gods feels like the first of the films that works with the wit, zaniness and slapstickery with which the Goscinny and Uderzo originals were intended. Obelix’s punches cause Romans to go flying with the sort of trajectories that rockets make, Asterix’s feet blur like bicycle wheels when he runs, the Gauls fight in big dust clouds. All of the supporting characters come on and do their respective pieces the way they do in the comic-books.

Louis Clichy and Alexandre Astier are not afraid to be silly and some of the most enjoyable moments come in the wackiness of sequences – the replanting of all the trees being a standout. What works especially well is the grand climax the film builds up to with the villagers having to face off against the Roman soldiers without the use of potion.

This also perhaps the first Asterix adaptation that fully works with the sly wit that is packed into the comic-books. Most of the other animated films have pitched the stories down to children where this has tended to get lost. There is quite a degree of satiric humour aimed at issues like gentrification and urban sprawl, price wars and cultural pollution, while there is something particularly funny to the way the film swings the issue of the slaves demanding their rights and striking for wages, only to be followed by the centurions demanding the same. There is even a series of puns and wordplays that manage to survive in subtitled translation.

Louis Clichy, Alexandre Astier and M6 subsequently went on to make a further animated film with Asterix: The Secret of the Magic Potion (2018).